or Lars Dam and Tamas Glied, both of whom locked their seat in the Top 4 tomorrow, their match was nothing more than a warm-up. With the pressure off, the two players had a fairly relaxed match, with Glied taking down Dam 2-0. When the two came up, Glied greeted Dam with a smile. "See you in the finals tomorrow?" he asked, as Dam nodded in agreement.

It's hard not to be confident when you are locked into the playoffs, but for a few players battling in the final round for a seat in Sunday's Semifinals, it was far from relaxed. While the atmosphere for the event was generally light, with all players drafting and enjoying the trip when leading up to this event, the final round is often going to change the mood. For a few players, things got serious.

The two players that all eyes were on was former Magic Online Champion Dmitriy Butakov and Cory Lack, both of who were sitting at 8-6 points. A win for either player would lock them into the Top 4. A loss from Butakov, however, did not knock him out immediately, as his tiebreakers gave him a shot at getting in even despite a match loss in the final round. 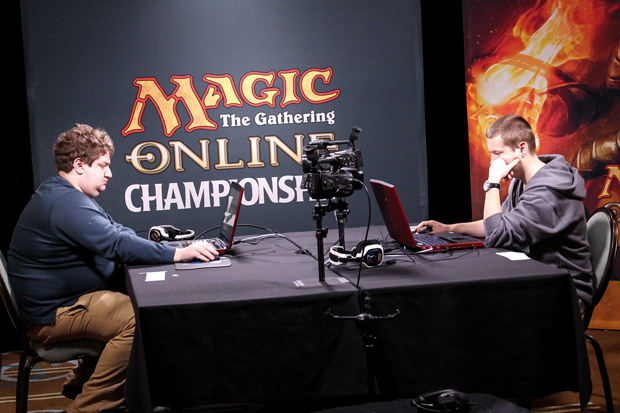 Dmitriy Butakov and Cory Lack faced off in a match that would determine the fate of more than just these two players in the tournament.

The game came down to a massive third game, where each player traded card for card, with Lack threatening to pull ahead with the brutal Bident of Thassa. While Mutavaut and the Bident loomed, a Doom Blade from Butakov shut down the man-land, keeping him in the match...

..at least until Thassa, God of the Sea managed to enter play, with Lack fighting through a Detention Sphere with Glare of Heresy to keep his God in play. When Master of Waves came off the top in a top-deck war between the two players, it was Lack who pulled ahead. Detention Sphere, exiling nothing, was enough devotion to allow Thassa, God of the Sea to attack, dropping Butakov from 10 to 5. When Butakov drew no answers to the Master of Waves, the game ended on the next turn, locking Lack in the Top 4.

However...that did not necessarily knock Butakov out. One player threatened to overtake him in tiebreakers if they could score a win.

Anssi Alkio, who barely trailed behind going into the fifteenth round on tiebreakers.

While Alkio was ahead for the majority of the first game in his match against Seth Manfield, who was stumbling on his colors and short two blue mana to cast the majority of his hand, Manfield's deck finally coughed up a second blue source, giving him access to countermagic as well as Jace, Architect of Thought.

While Alkio put up a fight with Whip of Erebos, threatening to kill Manfield out of nowhere by recurring copies of Nemesis of Mortals that could go monstrous the turn they come in, it was all for naught. A series of Detention Spheres sealed the deal in the first game. 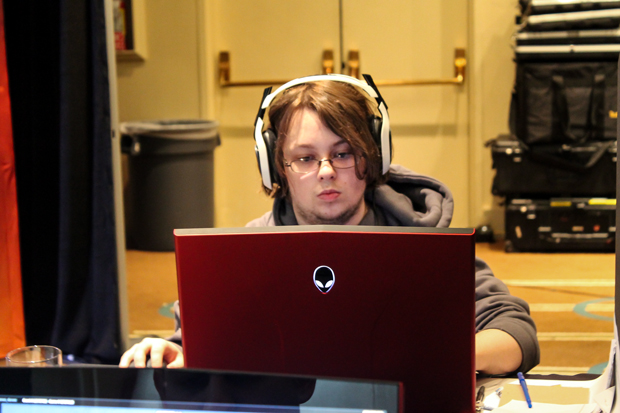 However, Alkio was able to fight back in the second game, taking out Manfield before the Esper Control player could get off the ground. It all came down to the third game...

...when Alkio was stuck on a single land, and Manfield pulling ahead. When Manfield's Dissolves started hitting copies of Grisly Salvage after Alkio found a second land, it was Alkio's B/G deck that could not get off the ground, and Manfield took the third and final game.

The loss from Alkio in this match put Butakov in a good spot to finish in the Top 4, as it was only Alkio's tiebreakers that truly threatened to leapfrog Butakov. With Manfield's victory, the Top 4 was all but set.

When the announcement took place, players listening in.

The former champion is still live to claim a back-to-back title, but he's got some tough competition ahead of him.