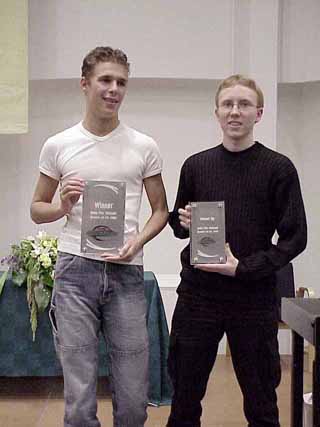 Noah Boeken got his international breakthrough when he became the 2000 European Champion. But since then he has had a lot of strong results, including a top 8 performance in Grand Prix Manchester. And when he got a second chance at the Invasion limited format in the capital of Finland, 'Broken Boeken' went all the way to become the Grand Prix Helsinki Champion. "It felt good and it was fun," Noah smiles after taking home 2400 dollars and six Pro Tour points.

The 19-year old player from the Netherlands had a really good run in Helsinki. He started off by going undefeated through the Sealed portion of the Grand Prix event, so him making it to the top 8 wasn't really surprising. And Noah wasn't particularly surprised. "I expected to make top 16 or top 8 because I practiced twice a week. Besides, I did well in Manchester which was the same format," he explains. Noah believes that being an experienced player is an advantage in a new format. "You adapt easier to a new set than the not so good players. There are some tricks they don't know," he says.

In the finals, he defeated one of Finland's veterans, 21-year old Erno Ekebom. Both players believed the matchup was slightly in their favour, however, Noah won 2-1 after the Helsinki resident was mana flooded in the two last games. Even a turn four Darigaaz, the Igniter didn't do it for Erno, he just couldn't keep up the pressure and it died to a Wallop. "I had answers for all the cards. And my deck was fast, while he played four colours. Sometimes you just don't draw the good mix," Noah shrugs.

Still, Erno was slightly disappointed. "But it's stupid to complain. I had my share of luck, and you can't be disappointed with second place," he says. The sociology student was particularly happy about getting some of his rating points back. "I went 1-6 at Worlds and lost more than 200 points," he explains. Winning 1700 dollars also helped a lot. "Now I can go to Vegas and have some money to play with," he grins. Finally, he got a trophy. Erno got a keyring when he made top 8 in 2000 Pro Tour Los Angeles, but that was not quite the same as a plaque: "Perhaps this is something more concrete," he says and takes a good look at the runner-up trophy.

While Erno is a student, Boeken is a full time Magic player, at least at the moment. He has a break from school and won't start again until next year, so this year has been pretty much playing Magic and hanging around with his girlfriend. He reckons that his good results lately are partly because of him taking the game more seriously. "I am more consistent now. Before, I didn't care that much to do well, but with the Masters, I go to Grand Prix events to get points," he says.

The victory gave him back the money he spent on the trip - "normally I earn money, but there is this guy I have to split with and his name is Ryan Fuller" - and the six Pro Tour points brings him a lot closer to the Masters Series. "I will try to play in all the European Grand Prix and try to do well," he reveals. His first goal though is to try and qualify for the Masters in Chicago through the Gateway tournament. Then, he will go to the Invitational - "I have to get decks, because I haven't tested at all." Finally, his long term goal is to win a Pro Tour. "I am satisfied with winning Euros and a Grand Prix, but why not win more?"