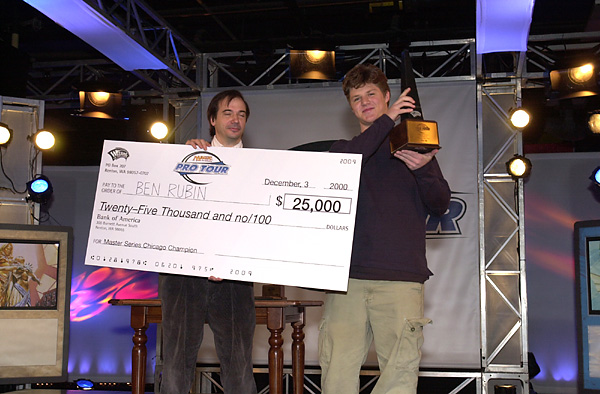 After three second places, Ben Rubin got yet another shot at a championship title when he reached the finals in the 2000 Chicago Masters Series. "I wouldn't really be disappointed if I got another loss, I can handle second places. But I knew I would feel a lot better if I won," Rubin smiles. He did indeed win, defeating Jon Finkel 2-0 in the finals. "It was good. To be able to beat him is sort of the highest hurdle that can there."

The 17-year old player from San Francisco, California went into the second Masters Series tournament with pretty low expectations. "I hadn't played the format enough to master it, and I hadn't been very successful when practicing it," Rubin says. However, before the tournament started, his good friend Casey McCarrel passed on some advice from Trevor Blackwell - that the trick was to try and force green and white as everybody else would try to draft blue and black. And since Rubin hadn't been successful during playtesting, he went for it. 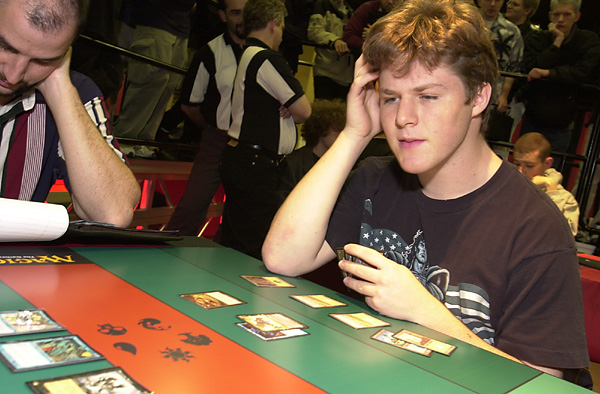 His first draft went extremely well, and Rubin easily advanced to the Top 8. He wasn't that satisfied with his second draft though. Ben was fed by Alex Shvartsman, who went into green, blue and white - the same colors as Rubin had chosen. "I took worse white cards in order to cut out white. Then in the second pack I got extremely good cards; I got a Benalish Trapper fourth pick and a Wings of Hope twelfth pick. So I was able to do alright although I was in a tough spot," he says.

Rubin's deck featured a couple of cards that are considered not to be top-notch. Still, Ben thought the deck was good. His three Glimmering Angels and three strong creature enhancers were the key cards in the deck. "I had the opportunity to get a creature my opponents wouldn't be able to deal with," Ben says, and he won five out of six games with a Strength of Unity'd Glimmering Angels. "Some of the cards are certainly not staples, and they are not always good," he admits. "But the Cameos were very good in my deck, they fitted into my mana curve and I was able to get my mana more consistent. And I could see myself in a situation where I'd be low on life and where I could use a Benalish Trapper or an Acolyte to get through with the Horned Cheetah." 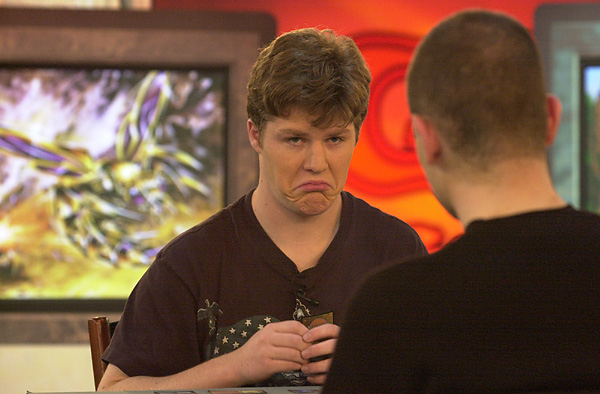 During the final match, the two commentators commented on Rubin's poker face. The statement 'He looks miserable, so he must have a really good hand' made the audience laugh, although Rubin reveals that he doesn't really do it deliberately. "I try not to let my hand affect the way I play, and I make sure my mood doesn't change. So I'm always very careful, even when I'm winning," he explains - although he admits that he has won a couple of times because he was able to bluff his opponent by showing an unconfident face.

The commentators also mentioned Rubin's Superman T-shirt that he was wearing during the finals. "I just like the shirt," Rubin says. He has been wearing it since Pro Tour London where he ended a bad streak, and the shirt also has another function - "I like to think that on the Pro Tour, I'm a force to be reckoned with. The confidence that's not in my face is on the shirt."