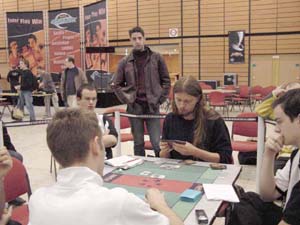 This is it: one more game to decide the tournament. Yann Hamon had some success with a couple a PT top 16's a few years back, but then faded out of sight for a while. An appearance in the final at Grand Prix London showed he was back on the scene and the Frenchman is looking to go one better on his home turf.

Bruno Carvalho is a Swiss player working his way up to some good results. He took an amateur prize without losing his status in GP Genova and now looks to be heading for a bumper prize in this Grand Prix.

was forced to mulligan but came out aggressive with a Tel-Jihad Chosen. The Chosen got mugged by a Raise the Alarm. Hamon tried to follow it with a Spikeshot Goblin only for Carvalho to give him headaches with a Crystal Shard.

Carvalho sent in his Myr and Soldier token as a bluff. Hamon didn't bite and blocked the Myr, forcing Carvalho to save it with the Shard. Carvalho kept up the aggression with a Skyhunter Patrol, but then he seemed to run out of gas. Hamon got rid of the troublesome Shard with a Goblin Replica and then summoned a Woebearer that promised plenty of fun with his Replica.

Sure enough the Replica attempted to come back into play only to have its return delayed by an Annul. Hamon kept up the pressure with a Slith Predator. Carvalho was still chipping away with a Patrol, although he needed something to back it up. 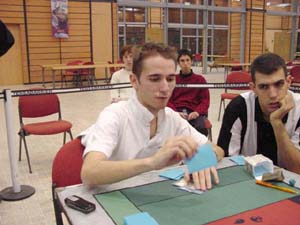 An Irradiate from Hamon got rid of the flier only for Carvalho to find reinforcements in the form of a second. Hamon set himself up for the long haul by ripping three lands out of his deck with Sylvan Scrying and Journey of Discovery. A Battlegrowth meant his Predator survived an encounter with the Patrol. Carvalho went digging for answers with a Thirst for Knowledge and found a third Patrol. The Predator was looking scary now though at 4/4.

Carvalho brought out two Skyhunter Cubs and threw both in the way of the Predator. Unfortunately a Predator's Strike pumped the Predator large again and Carvalho's situation was looking wrecked. He drew a card and then conceded the first game.

In Game 2 Hamon ramped up his mana with a Myr and then went on a Journey of Discovery. Carvalho took the opportunity to set up his hand with a Thirst for Knowledge. Then the game started to get exciting as a couple of Patrols came out on successive turns for Carvalho. Hamon dropped a Fangren Hunter and after a couple of hits on either side the game hit a temporary impasse as two more creatures from Hamon, a Dross Prowler and Krark-clan Grunt forced Carvalho to rein back and consolidate with Slith Ascendent and Skyhunter Cub. 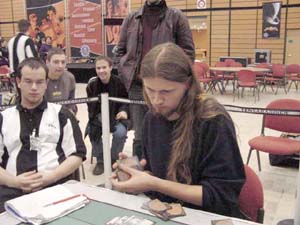 Hamon had no interest in staying at home. He dropped a Fireshrieker and swung with the team. Fearing a trick Carvalho threw everything in the path of the Hunter. It wasn't a Predator's Strike but an Irradiate that made Carvalho's play the correct one, even though it resulted in the loss of two Patrol and the flying Slith.

Little Consolation though as a Sword of Kalda equipped the Prowler. Carvalho had a Soul Nova for that threat, but he was still reeling on the ropes. An Altar's Light took out the Fireshrieker but he was still haemorrhaging life from a Krark-Clan Grunt. A Woebearer came out to increase Carvalho's well...woes.

He brought out a Clockwork Condor to handle the threat. It just wasn't to be the Swiss player's match though. A Goblin Replica sent the Condor to the graveyard and all those threats Carvalho had managed to fend off were coming back again.

He conceded against the inevitable and Hamon managed to better his performance in London by taking home the title.