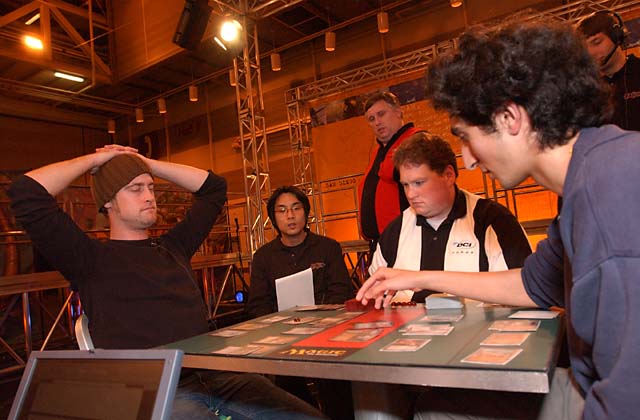 It's the finals, yo.

These people have come a long way to make it here, battling through approximately thirty-seven rounds of Swiss and two more in the Top 8. Gabriel is the new kid on the block no more, proving his worth in the past two years with Sunday appearances. The man is known not only for his skill but also for often playing original decks. Rickard has been lower on the radar, shifting on both sides of the magical twenty Pro Tour point mark for a few years. This all changed during Boston when he made it to the finals as a member of The Original Slackers (appropriate name if I have ever seen one, those guys are the laziest).

Rickard felt like he has an advantage in the matchup having just swept Yann Hamon. I did not have a chance to talk with Nassif before the round, but after sitting down he immediately said that Rickard will probably win. Rickard opposed to such a statement, as he has a tendency to lose to whiners. "Can't beat them when they complain". This just gave Nassif more steam, and he reminisced how he beat Mattias Jorstedt playing the same Welder deck by being ridiculously lucky.

It seems that neither player is the biggest fan of the format, but they are not exactly on a bad mood either. Nassif won the die roll and decided to go first. Both players immediately declared not taking a mulligan. That is a sign of an explosive game if I ever saw one. Nassif sped out a Talisman with Ancient Tomb. Rickard went for Tomb-Monolith but Gabe had the Force Spike. Gabriel dropped Port, Talisman and Key and tapped Rickard's Tomb during upkeep. Rickard played Seat of the Synod and Voltaic Key. Nassif sacrificed one of the Talismans to Tinker up a Gilded Lotus. He now had access to seven mana. He dropped Charbelcher and Ported the Tomb during upkeep. Rickard was thinking about taking mana, most likely having a Thirst of Knowledge in hand. No mana was taken anyway. Rickard laid down City of Traitors and Tangle Wire.

Gabriel tapped Talisman, Charbelcher, Tomb, and Key to the Wire leaving Port and Lotus untapped. He played Tomb and said go. In response to Wire going on the stack Gabriel tapped Ancient Tomb. Rickard tapped it for mana, tapping Key, Wire and City of Traitors to the fading artifact. He cast a Thirst during draw step discarding Citanul Flute. No land was played. During upkeep Gabriel tapped two Tombs and Talisman to the Wire. He then played City of Traitors and was done. Not much action after the explosive start.

Rickard tapped Wire and Seat, after which Nassif Ported the City of Traitors. Ancient Tomb brought out Grim Monolith. He tapped it, untapped with Key, and played Lightning Greaves. He then tapped Monolith again to bust out Metalworker. Nassif was talking about how he will kill the Metalworker in response to equipping, telling how he never misses. "I need to hit for six and get seven, just the way it is". The impossible happened though and worker took zero damage from Charbelcher. Hasted guy revealed Tangle Wire, Seat of the Synod and Monolith. Rickard played Seat, buried City and cast Thirst with four mana left in his pool. He discarded Metalworker and played Monolith along with Gilded Lotus and Tangle Wire. 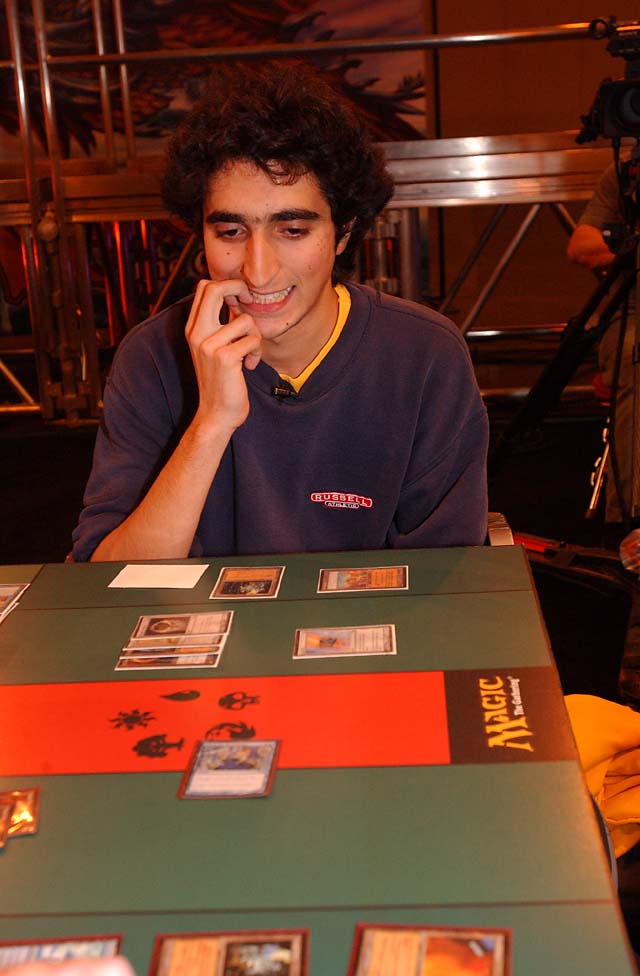 Nassif needed to tap six during upkeep. He opted for two Tombs, Port, City, Talisman, and Key leaving Charbelcher and Lotus open. He then drew and said go. Rickard tapped two Wires, Greaves, and Metalworker. He cast Lotus and Worker, equipping it. Nassif missed with Belcher so Worker attacked Gabriel down to ten. Nassif tapped Port, Tomb, Talisman and Charbelcher, probably embarrassed with the two misses. He sacrificed Talisman to Tinker up another Belcher instead of going for a Mindslaver. He then cast Mindslaver with remaining mana, being one short to cast and use it. Rickard tapped two Wires. He then hit with the two Metalworkers and passed the turn with two cards in hand.

Gabriel tapped the Tombs. He activated Mindslaver during main step. When the turn changed Rickard revealed a hand of Shivan Reef and Ancient Tomb. He was quite unhappy after drawing Tinker. It got Bosh, Iron Golem and Rickard conceded.

No mulligans this time either, but more thinking behind the decision. While waiting for a permission to start, both players were laughing about Gabriel's luck. Rickard then opened with Ancient Tomb. The Frenchman was content with City of Traitors, Talisman. Rickard played Metalworker with City of Brass, and Nassif Brainstormed end of turn. Nassif put out another Talisman, replaced the City of Traitors with a new one and dropped Charbelcher. Rickard played City of Traitors and played Tinker sacrificing Metalworker without taking mana from it. Tinker got a Lotus and Rickard Shattering Pulsed with buyback destroying the Charbelcher. The Metalworker didn't even attack, possibly a sign of eighteen played rounds and too little sleep for Rickard.

Gabriel used Talisman to bust out a mainphase Brainstorm, and did not look very happy with his hand. A third Talisman came into play and Gabriel took out all lands with Mana Severance. Rickard was counting the lands to find out how many Gabriel had in hand. Nassif did not play a second land since the one he had in play was a City. Rickard played Voltaic Key, Ancient Tomb killing his Traitors, and tried to take twelve mana even though he had access to eleven.

"They always cheat against me!", proclaimed Nassif. 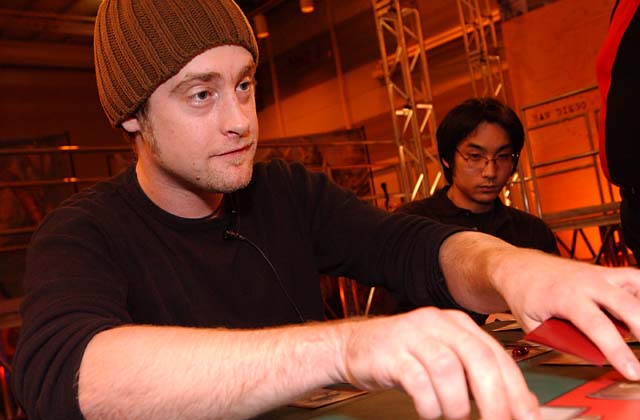 Rickard bought back the Pulse twice to kill two Talismans and played a Welder. Nassif untapped, yelled something cheerful in French and hit his deck. He then drew, sighed and passed. Rickard seemed relieved after getting to untap. He cast Thirst of Knowledge discarding Tangle Wire. Voltaic Key untapped Lotus and Pulse with buyback killed the last Talisman. Österberg was down to seven life just from using painlands. "That is nothing", Tuomo Nieminen would say, since he won a game in the swiss after taking thirty-one damage from his own lands.

Nassif was unable to do anything during his turn. Rickard just played Metalworker and started to hit for one while Weldering out the Wire. Nassif kept saying go. Welder and Worker hit for two! At some point Rickard finally drew a Platinum Angel and Nassif scooped up his only permanent.

"I wish Jon Sonne had not screwed up against you." Gabriel said. This apparently happened during day two. After some inquiries, Nassif admitted that the next time he sees the person in question some eyeballing will occur.

Gabe kept the hand and Rickard mulliganed. Six cards were not fine either, so down to five it was. Gabriel started with Tomb, Monolith, Key, and Talisman while Rickard just had City of Brass. Monolith was untapped at end of turn. Nassif played Gilded Lotus and Charbelcher. Rickard had another Brass and he played Monolith followed by Metalworker. Nassif responded with Mystical Tutor and that was enough.

No mulligans this time around. Rickard played City of Brass, Goblin Welder while Nassif had Ancient Tomb. Second turn Great Furnace, Lightning Greaves looked unimpressive while Welder got aggressive. Gabriel just had another Tomb. Rickard dropped Tomb and Tinkered away the Furnace. With the poise and grace of a chess player, Rickard was soon attacking with a hasted Bosh. Gabriel drew and scooped with six blue cards in hand.

After the first two slower games, the extendedness of the format has finally kicked in.

"I heard you screwed up a lot in the quarters. Can't you do that now?" -Gabe
"I always screw up. That's my strength." - Rickard 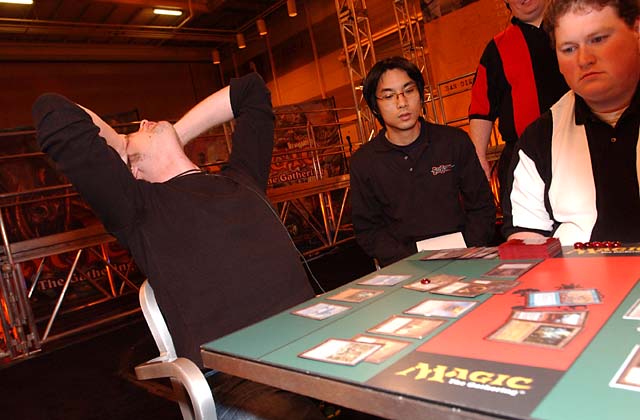 After some pondering Gabriel decided to keep. Österberg threw his hand back. Six cards were fine and Gabriel led with Polluted Delta. Rickard dropped Seat, Key while Gabriel thinned his deck. During his turn he searched for another Island and cast Mana Severance removing thirteen lands. Rickard laid down City of Traitors and Tinkered away the Key for Mindslaver. Gabriel played third Island, Monolith and Tinker floating one. He got a replacement Monolith (what waste!) and tapped-untapped it to avoid mana burn. Rickard did not play a third land, but put out Tangle Wire.

Gabriel floated six mana, drew his card and kept untapping Monolith. During his mainstep Gabriel started laughing and shaking his head. He then laid Tomb and another Monolith. Rickard tapped Wire, Mindslaver and Seat of the Synod. He tapped Traitors, played another Seat and Thirst for Knowledge. Gabriel tapped Tomb and two Islands. He then drew, played Island and said go.

"This game is retarded." -Gabriel

Rickard tapped Wire and Mindslaver. He played City of Brass and Welder. Gabriel was one turn away from the Mindslaver lock, but with half his combo already done. He tapped two Islands and slowly drew the card, looking for the topdeck. And he drew a Morphling! Seriously though, he had nothing and just passed the turn with a sigh. Rickard let out a breath of relief, played City of Traitors and took Gabriel's turn. Gabriel showed a hand of Annul, Voltaic Key and Mana Severance. Another Key was drawn. One of the Keys was Annuled and all the lands tapped. At end of turn Rickard exchanged Wire with Lotus and played Thirst, discarding City of Brass and Traitors. On his turn he put out Ancient Tomb, Tangle Wire, Metalworker and exchanged Wire with Mindslaver. He then took the turn. Nassif drew a Talisman and was made to play it along with Voltaic Key. Rickard played Chromatic Sphere and exchanged it with Slaver for a yet another turn. Metalworker beat him down to six and Nassif conceded.

Making back to back finals, this time Rickard emerged the victor. This was made even sweeter by the fact that the Welder deck was originally the idea of his Boston teammate, Lovre Crnobori. Congratulations to Rickard, Pro Tour New Orleans champion!