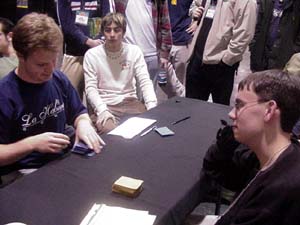 pulled off an upset victory last round when he defeated Peter 'PTR' Szegeti in a grueling three game match that had PTR as the heavy favorite several different times during games two and three. He was playing the deck he seems embarrassed to admit he has dubbed The Dump Truck. It is similar to the Fiends deck that made the Top 8 of GP: Reims last year and has numerous silver bullets for every match-up.

His opponent was going to walk away form this match with the most money regardless the outcome of their games. He was an amateur coming into this weekend's action-his greatest achievement to date had been winning the Oregon State Championships. He was playing Red Deck Wins and had just defeated fellow amateur Nick Meves playing a similar deck. He was looking over the decklist for Ben Rubin's rogue build and was quite nervous about games two and three of the match-up.

Catching a bit of the conversation as he sauntered over, Ben came over and asked his opponent, "You getting ready to get Chilled?"

Nathan laughed, "Yeah, I'm hoping to win round one and then get another one."

Ben settled in for the match and turned to face his opponent with his pen poised above his pad, What is your name?"

"Nathan… hey is that the ultimate insult?"

While they continued to discuss decklists, Nathan explained the Psychogenic in his sideboard. It was for the Twiddle Desire match-up. He did not want to board Pyrostatic Pillars because he would get Chilled out.

Nathan opened quickly with his Lavamancer. Ben Duressed again and saw that Nathan had drawn a Slith Firewalker-he took a Hammer. Nathan played the hasty Slith on the next turn and beat in for two. Nathan commented on the ugliness of Ben's white bordered Swamp that he used to play Shadowmage. He Hammered the Finkel and attacked for three.

Nathan was out of lands but not threats. After Ben d the walker he played a Seal of Fire and a Jackal Pup. A Meddling Mage came down but it was not long for the world and the Pup got in for two damage.

Nathan imprinted his cat on a Chrome Mox and played Tangle Wire. A turn later Ben played a Mage and Nathan ignored it. He just finished off Ben with a combination of Lavamancer activations and a Firebolt. 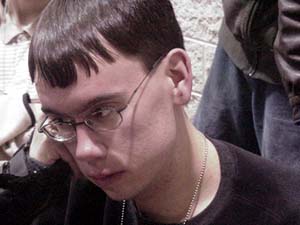 Ben's deck is brutal for Nathan after sideboarding. He brings in Vampiric Tutors, Chills, Chrome Mox (so he can get a turn one Chill) and basically transforms his deck into a turbo-Chill/Exalted Angel deck. He was looking for Chill preferably on the first turn and his opening seven did not offer that. His second hand was even worse with no lands. He did have a Chrome Mox and decided to keep it. Nathan quickly threw his hand back as well. He just as quickly decided to keep his next six.

Ben kicked thing off with no play-no land, no Mox, just, "Go."

Nathan was stunned, "Go? That will be quite a story if you win this game." He played a Mountain and Seal of Fire. Ben drew a land and played a turn two Chill. It needed to be an Island and it was-he had only one blue card in hand, the Chill and he couldn't pitch that to the Mox.

Ben was still without lands but he played another Mox and played out his second Chill. Now land was coming to Ben and he played a Seal of Cleansing and aimed it at the Chrome Mox. Nathan tried to Scroll him naming Tangle Wire but Ben found a Pillage.

Ben Peeked and saw two Tangle Wires, Grim Lavamancer and a Pillage. This time Nathan was successful with his Scroll. He repeated the process on his own upkeep and was successful again. Nathan played a Wasteland and groused a little, "How good was drawing your one ?"

Ben just shrugged and played a face-up Exalted Angel. Nathan drew another card and then decided better of going any further, "Nah!"

He was right. It was a good story.

Nathan kept a no Mountain hand this game and played Chrome Mox and Wasteland. He used the Mox to play Jackal Pup. Ben played a Flooded Strand and cast a Seal of Cleansing and killed the Mox. When Ben tapped two on the next turn he announced, "Tasbo's Web would be good." When Ben played a Chill he sighed, "That is good too." 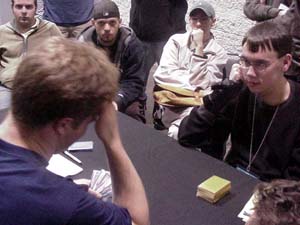 Nathan had only a Wasteland and a Port in play and he was tapping them keep Ben from white mana but the Californian Brainstormed into a . He also played a Chrome Mox with a Shadowmage imprinted on it and used it to Smother the Jackal Pup during Nathan's next attack.

He followed it up with a Vampiric Tutor and Nathan had no upkeep effects-he suspected Web and he was correct. Ben played the Web and then dug into his deck with a Brainstorm. Nathan just said, "Go…what a great Game 3."

When Ben showed him an Exalted Angel, Nathan congratulated him on his victory.