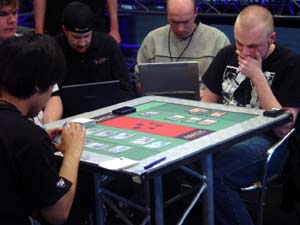 is not exactly unfamiliar territory. Osamu Fujita has made a career of top finishes in the finals of major tournaments, but has yet to actually win one. This has earned him the nickname of "Silver Collector", as he has plenty of finalist trophies, but has yet to win championship gold. For what it's worth, there's no better place for Fujita to break his streak than on the Pro Tour. Of course, there's more than just Fujita's search for his first major win on the line. Japan has become a major force on the Pro Tour of late, placing players in the Top 8 of the last five consecutive individual Pro Tours. Look at names like Tsuyoshi Fujita, Masashi Oiso and Jin Okamoto. What do all these Japanese players have in common? They all made it to the finals of a Pro Tour, falling one match short of winning the whole thing. Japan has yet to win a Pro Tour, and with The Silver Collector as their latest hope, the irony is staggering.

And, if Nicolai Herzog has his way, history is going to stay right where it is. He represents not only the old guard as a Magic veteran, but the European dominance on the Pro Tour over the last few years. Herzog has a smaller second place monkey on his back, as he lost to Kai Budde in the finals of last season's Rochester Draft Pro Tour. The former European Champion is back in the same situation, and is no doubt looking to take last season's performance one step further.

Herzog started with Pyrite Spellbomb, and played Tel-Jilal Chosen on turn two. Fujita accelerated with a Myr, and Herzog summoned Viridian Joiner. Fujita played a second Myr, missing his third land drop. The Chosen continued its attack, and was joined by Hematite Golem. Fujita played Scale of Chriss-Goria on end step, untapped, played a land, and brought out Crystal Shard. With Herzog tapped out, it was able to bounce the Joiner, and Fujita played Frogmite for free. The Joiner came back out, and Fujita's Neurok Familiar hit an island. Solemn Simulacrum accelerated Herzog a bit more and he ended his turn, sitting back as the game had become a stalemate. With the ground crowded, Fujita went to the air with Nim Shrieker. With no fliers and a Pyrite Spellbomb that would be stopped by Crystal Shard, it seemed that Herzog was at a loss for answers until he played Icy Manipulator. He allowed Fujita to attack with the Shrieker, and used the Icy to tap the Shard, making it unable to save the Nim from the Spellbomb. Fujita played Yotian Soldier, and ended his turn.

Herzog attacked with the Chosen, and Fujita blocked with Neurok Familiar. It was his only non-artifact blocker, and.with the help of Predator's Strike, Herzog made sure it got out of the way. Fujita cast Fabricate, searching up a potentially massive Lodestone Myr. Due to the Icy it would have problems getting through, but the threat was at least on the table. Meanwhile, Tel-Jilad Chosen continued its steady but sure attack, bringing Fujita down to nine. Trolls of Tel-Jilad and an Exile provided a little extra defense, and the Chosen kept going through Fujita's artifact creature team until the game was over. 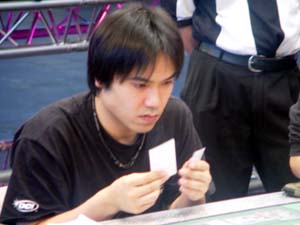 Fujita played Neurok Hoversail followed by Silver Myr, and then Wizard Replica. Electrostatic Bolt sent it to the graveyard, and Herzog made a Goblin Replica. Fujita played Somber Hoverguard, and the Replica attacked past it for two. A second Goblin Replica followed, and Fujita's artifact heavy affinity deck now had to deal with two walking Shatters. The Hoversail equipped the Myr, and four points of damage came through the air. Herzog's Replicas attacked right back, and he played Icy Manipulator with a mana to spare, shutting down the Hoverguard. Fujita played a Frogmite, and Herzog sent in the Replicas. Frogmite blocked one, and it survived combat thanks to Battlegrowth. Fujita played yet another Frogmite, and this time Herzog killed it with Deconstruct, then played a board dominating Molder Slug. The Replicas attacked for five, and Fujita used Terror to kill the Slug on end step. It didn't matter, as Fujita couldn't put up much resistance, and fell behind two games. 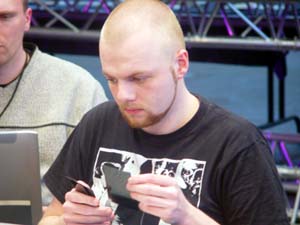 After some thought, Fujita kept his hand and played a first turn AEther Spellbomb. Herzog brought out Tel-Jilad Chosen, and Fujita played Scale on end step. Neurok Familiar didn't hit an artifact, but provided a blocker for the seemingly innocent creature that won the first game. Fujita let it get through for two damage, and Herzog played Goblin Replica. Now that Fujita had the mana open for AEther Spellbomb, Herzog only attacked with his Replica, which got through for two damage. He then cast Journey of Discovery to get two more lands, and ended his turn. Fujita summoned a 4/1 Nim Shrieker, and Herzog attacked with both his creatures. Neurok Familiar blocked the Chosen, which survived combat thanks to Predator's Strike. Herzog kept the offense coming with Krark-Clan Grunt, and Fujita had Skeleton Shard. Now Herzog untapped, and played a backbreaking Icy Manipulator. It tapped down Nim Shrieker on main phase, and Herzog attacked with his team; Terror killed the Chosen as Fujita went down to seven. Herzog kept attacking, as Fujita's Myr became an efficient recurring chump blocker thanks to the Shard. Once Fujita got to three, Herzog used Deconstruct to kill a Myr, an Icy to tap down the Shrieker, and cast Battlegrowth to finish the game and win his first Pro Tour- Osamu Fujita and Japan would have to settle for second place once again.