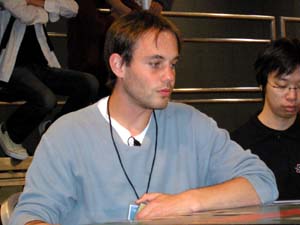 Nicolai Herzog was looking to go back-to-back in Limited Pro Tours. He may not have opened Molder Slug this time around but his deck may be more formidable than the one he had in Amsterdam. His black-red powerhouse featured abundant removal and the still-underrated Panoptic Mirror. In one game of the quarterfinals he had a Mirror out with Terror, Electrostatic Bolt, and Echoing Ruin all imprinted on it. And that only scratched the surface. His best card may have been Granite Shard for this finals match-up.

Antoine Ruel was playing a red-white equipment deck that many pegged as the best deck at the table but he had a host of creatures that would fall before the red Shard. Antoine was not only looking to win his first Pro Tour but he was hoping to win the first Pro Tour by a French player since Farid Marenghi. When you consider how dominant France has been over the past year it is surprising to realize they have not taken home a trophy in quite some time.

As they shuffled each other's decks for the match Nicolai accidentally flipped over a card and Pro Tour instincts kicked in as he quickly averted his eyes and asked his opponent to pick it up, "Antoine can you make sure I can't see this card?"

The French player chuckled, "You can look at it. You have the decklist."

Nico's opening hand had Grimclaw Bats and three Swamps, two red cards and Myr matrix. He decided not to keep it. His next six featured two Swamps and a pair of removal spells--Terror and Echoing Decay. His remaining two cards were Lodestone Myr and Mirror Golem. Ruel quickly sent back his opening seven and kept the next six with a Purge, Blinding Beam, Alpha Myr, Krark-Clan Grunt and two lands. They waited for the clock to strike three so they could begin play.

Antoine played his Alpha Myr and Nico stalled on his pair of Swamps. When the Myr attacked he killed it with Echoing Decay. Ruel followed with the Grunt. Nico was still stuck on two and played his Grimclaw Bats. Antoine used his turn to play Pteron Ghost and Purge the Bats.

Nicolai's land continued to elude him and he took a turn to Terror the Grunt. Antoine got in with his Ghost and cast Vulshok Gauntlets.

Nico's third mana, a Mountain, allowed him to play the dreaded Granite Shard. Antoine put the Gauntlets on the Ghost and Herzog took five--falling to eleven. He drew his fourth land but had no play. Ruel was also out of action and looked glumly at his Ghost that was stuck in the tapped position. Herzog shot him EOT and untapped to play a Myr Matrix.

Ruel played an Auriok Glavemaster and Leonin Shikari. He moved the equipment over to his Glavemaster but Herzog devastated him by shooting the Pteron Ghost and wiping out the rest of the team with Barter in Blood.

Ruel tried to regroup by playing a Gold Myr and equipping it but Nico's hand was full of cards and he played Dross Golem and Lodestone Myr. Ruel's Myr stayed back but Nico killed it with Electrostatic Bolt and attacked for eight.

Nico made a Myr token EOT and made another on his own turn to get an extra activation in for his Lodestone Myr. He finished the Frenchman off with the Granite Shard.

Nico laughed as they reached for their sideboards when Ruel joked, "Myr Matrix is just too good."

"Yes, Myr Matrix was the key."

Ruel reconsidered, "Well maybe it was Barter in Blood. 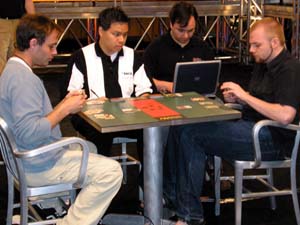 Nicolai brought in Culling Scales and Irradiate and took out Death-Mask Duplicant and Ogre Leadfoot.

Ruel fantasized about side boarding Fiery Gambit, "It would be so good to win with that card." Instead he took out Vulshok Gauntlets and something else to make room for a Drill Skimmer and Krark-Clan Shaman.

Neither player mulliganed and they began to play. Rule laid a Plains and Nico drew before the spotter halted them to wait for the video coverage to catch up. Ruel kidded about getting Nico a warning for drawing extra cards.

Gold Myr was the first play from Ruel and it was met by Leaden Myr from the Norwegian. Nico blocked when it attacked and they traded--he was holding Moriok Scavenger and Barter in Blood. Ruel played a Pteron Ghost and Auriok Glavemaster. When he attacked on the next turn Nico Bolted the Ghost. Ruel played an Auriok Steelshaper.

Once again it was time for the fearsome Granite Shard. Ruel played a creature that was out of reach in Skyhunter Patrol but Nico's deck was rumbling to life. He had missed his fourth land drop and played an Iron Myr with enough up to shoot the Steelshaper when Ruel attacked. Ruel added the Grunt to the board.

Herzog Scavenged for Leaden Myr and took two from the flier. Spikeshot came down and Nico killed the Glavemaster. There was time enough to deal with the Goblin. First he killed the Patrol with Essence Drain. He blocked the Grunt with Scavenger and it was actually Ruel's turn to kill something--he finished it off with Spikeshot.

Herzog Irradiated the Spikeshot and shot the Ghost. He played his Leaden My and a Dross Golem. Ruel looked exasperated by the board and the amount of cards in the Norwegian's grip. "You have six cards in hand and none of them are land?"

Ruel played a Sword of Fire and Ice without a creature in sight. Nico took no chances and Echoing Ruined it. The French player had a Shaman and Drill Skimmer but it was not enough and they moved ahead to Game 3.

Ruel was frustrated with his deck and laid an Auriok Glavemaster side by side with a Bonesplitter, "I have played twelve games and still not drawn this guy and equipment. I will have to do it for the next three games."

Herzog was feeling confident and chuckled, "It might not have mattered if you did."

Ruel sighed, "I need you to not draw your Granite Shard."

Both players kept and Nico did have the Granite Shard in hand. Once again they waited for the coverage. Ruel showed Nico a Plains and Glavemaster and knocked on his deck for the Splitter.

Herzog was surprised at his dominance to this point in the match, "Your deck is actually ridiculous. These games are supposed to be closer."

Ruel led off with his Glavemaster and followed with Leaden Myr. Nico had a Myr of his own. Antoine had no equipment but was able to power out a second Glavemaster and Spikeshot Goblin on the third turn. He slumped on Nico's third turn when he once again had the Granite Shard.

Antoine used his Goblin to kill Nico's Myr and attacked with the Glavemasters--Herzog fired back at the Frenchman's Myr. Ruel played another one toughness creature in Nim Replica. Nicolai had no play and when Ruel swung in with three guys he shot the Nim Replica and fell to fourteen. More one drops for Ruel with Pteron Ghost.

Herzog tried to puzzle out his next turn. "This brings up an interesting decision… You have one card and I'm at fourteen?" He could play Panoptic Mirror, Greater Harvester, cast Barter in Blood and shoot something, Nim Replica and shoot something, or Irradiate and shoot something. "I have a couple of amazing plays here." He just passed the turn. When Ruel attacked he shot the Ghost and Irradiated a Glavemaster; he fell to eleven and Ruel summoned a Grunt.

Herzog's deck was just too much for Ruel's and he shot the Ghost and took down the rest with his Barter in Blood. Ruel knocked on his deck and was rewarded with Vulshok Berserker off the top. Nico plunged to eight while Ruel was still pristine at twenty. Nico almost seemed worried, "That was actually pretty good. This game is close. That means I screwed up somewhere."

He cast Greater Harvester. Ruel attacked and tapped the Berserker and the Harvester before blocking with an entwined Blinding Beam. Nico was at five. He sacrificed a Mountain during upkeep and played Nim Replica. Ruel stayed back with his Berserker and fortified with Razor Golem but Herzog had a back-breaking Electrostatic Bolt.

Herzog lost a Swamp and attacked for five. Ruel elected not to block and lost a pair of Plains. Herzog added a Grimclaw Bats to the board. Ruel had no play and no attack. Herzog shot him EOT. He lost the Bats to the Harvester's upkeep and this time the Berserkers got in the way. Herzog played Iron Myr. 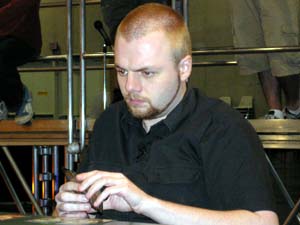 Ruel offered a Gold Myr and it fell to the Granite Shard. Herzog's next attack was for nine and Ruel was left with only a Plains. Nico extended his hand but Ruel good-naturedly would not concede. He knocked on his deck and played the Leonin Scimitar he was hoping would arrive on turn two just once.

Nico's next attack not only killed Ruel but destroyed his last two permanents as well.

Nicolai Herzog is the Pro Tour San Diego Champion. He also moves into the lead in the Player of the Year race with 77 points. This was his second Limited Pro Tour title this season. Between the two titles and the end of year payout, Nicolai is likely to win over $80,000 playing Magic this year alone!