A long day was nearing its end. Both players had some good days, but Amiel arrived here after an incredible run: He started off with two losses after his three byes. After his 3-2, he won every single match until round 15, where he drew into the Top 8. Nine wins in a row, and unrelenting energy up until this match, his first appearance in an individual GP final. Would he be able to continue his elimination run against Paul Cheon, one of America's finest? 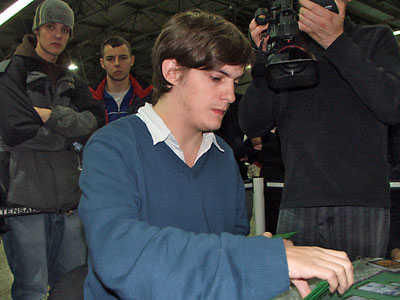 Amiel Tenenbaum in doubt if he could continue his winning streak through the finals.

Card drawing and Cryptic Commands commanded the early game. Amiel was first to press home with Think Twice, but Cheon got the bigger reward from his Ancestral Visions. Two Cryptic Commands that Amiel burned early for tempo and card advantage put the Frenchman ahead. The two players were keeping up neck by neck in terms of card advantage, with Cheon suspending a second Visions, Amiel thinking Twice twice again, and suspending Ancestral Visions of his own.

Cheon had a morph, and Amiel didn't have to think twice to Think Twice twice a third time. Venser, Shaper Savant tried to undo Cheon's ground critter, and while Cheon had Rune Snag, Amiel was well set up with countermagic of his own by now, canceling the Snag with Faerie Trickery. His Venser stuck, Cheon replayed the morph.

It was Brine Elemental, locking down two of Amiel's three Deserts and the Venser for a turn. The question now was: Did Cheon have the second piece to complete the combo, and did he have the means to force it through?

Ancestral Visions resolved. Cheon attacked with Brine Elemental. It's a solid beater in its own right, taking Amiel to 11. But the real meat was the morph Cheon played. Amiel had Remove Soul, but calmly, Cheon put the bait Brine Elemental into his bin. Tapping another three, Cheon placed a second morph onto the table, this time the Shapeshifter. Amiel had Rune Snag, Cheon paid up. Amiel had a second Rune Snag ready, though, and Cheon could not press his combo piece through the wall of triple countermagic.

Amiel drew three off his Ancestral Visions, Cheon suspended one. Amiel attempted Teferi only to have it snagged by Cryptic Command. The two players knew their decks. The match was a positioning war, like all good control on control matches. The fifth Ancestral Visions of the match was suspended by Amiel. Before it had an effect on the game, Cheon cleared the way for an attack with his Brine Elemental by putting Amiel's Venser under Oblivion Ring.

The Frenchman went to 6, and it was time for a counter war. Amiel had Guile, Cheon had Cryptic Command, Amiel replied with Pact of Negation, and Cheon finished the chain with Rune Snag. Guile felt guilty enough to shuffle itself into Amiel's library again.

Cheon attacked and passed the turn. Amiel, at 1, had an end-of-turn Teferi as a last resort. Not impressed, Cheon brought his own Teferi to play, revealed Shapeshifter and locked Amiel out of game 1 of the finals of GP Krakow.

By now, Amiel must have been pretty far-sighted into the past, as he continued where the two left off: with suspending Ancestral Vision. And more assistance came from the future: Jace Beleren showed up twice, disembodied by Rune Snag once and running out of loyalty fast on his second coming.

When the Ancestral Visions were about to resolve, both players spoke in tongues, and the two Cryptic Commands cleared the table and stopped the Visions. Cheon rebuilt with two morphs, which presented a problem for Amiel: Which one should he steal with Sower of Temptation? "This is the good one," he said, and took the left morph. Turns out it didn't matter, because both were Brine Elementals.

With Ancestral Visions pending and one more creature than Cheon, Amiel looked positively ahead. The problem in this match-up was that imperfect information multiplied into unpredictability even more than usually, and one card could turn almost any tide. Take Oblivion Ring, for example. Cheon used it to remove Sower of Temptation and got his Brine Elemental back. Amiel tried to reverse that at least temporarily with Venser, but Cheon wouldn't let it fly: "I Venser your Venser." 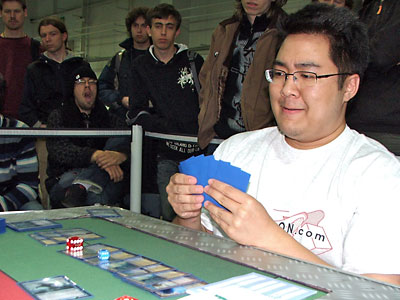 Paul Cheon was unsure if he'd master the complicated control mirror successfully after two long days. Now Paul Cheon was tapped out, giving Amiel the window he wanted to effectively use Venser. Amiel, though, tried to target the Sower of Temptation. That, of course, did not work, so Amiel had to return Oblivion Ring to Cheon's hand, gaining control of his Sower and Brine Elemental. But the Legend rule killed both Vensers.

Amiel tried Cryptic Command next, got it into the reach of Cheon's Cryptic Command and had to force it through with Pact of Negation. Cheon's morph (Shapeshifter) started a similar war over control of the stack, and Amiel used a second Pact to win it. His Brine Elemental and Sower beatdown pair could take Cheon down, because Cheon was unable to breach the wall of Amiel's Pacts and counterspells.

"Were you actually thinking about the game? I mean, are you tired, or are you just thinking faster?" Amiel asked. He said that when playing the match against Wafo-Tapa, they wouldn't have finished even Game 1 yet. Cheon shrugged, indicating that, yes, maybe, he was a fast thinker.

Amiel prayed for and got first turn Ancestral Visions, but Cheon kept up. Jace Beleren and Ancestral Visions of his own promised card advantage to match in the final game of the the final match of the final European GP of the season. A Cryptic Command from Amiel met its equivalent from Cheon, and Cheon's Jace met her end at the hands of Amiel's Jace.

The slugfest of card drawing continued. Amiel suspended Ancestral Visions, a recurring theme in this match. Cheon replaced his Jace with Jace II, and upped the total of Ancestral Visions currently removed from the game to three.

Amiel thought twice, on cardboard, and had Faerie Trickery to disseminate Cheon's first Ancestral Visions. Think Twice again. Both players had plenty of mana to make their wishes come true, and infinite cards in their hands, cards like Venser, Shaper Savant. Cheon used the crafty mage to return Ancestral Visions to Amiel's hand who was already discarding regularly because of an excess of cardboard in his fingers.

Cheon's Ancestral Visions prompted Faerie Trickery from Amiel, and Cheon let it happen. The American was saving his countermagic for later and suspended Aeon Chronicler instead. Amiel passed the turn without a play, but the Frenchman was ready with two Remove Soul and a boatload of Islands to fight against the Chronicler.

Jace kept Cheon ahead and gave him options, options like suspending a second Chronicler for one. If he would be able to stop Amiel's incoming Ancestral Visions, the advantage would be significant. Cheon went for Faerie Trickery, Amiel had Cryptic Command. Cheon presented another Trickery, and this time, Amiel drew blank. Now all Cheon had to do was force through his Aeon Chronicler in his upkeep, and Amiel's remaining 12 life might be gone in two bites.

This time, Amiel brought Faerie Trickery, and Cheon had Cryptic Command. Amiel had a second Trickery, and it looked like both players were sitting on Rune Snags. At least Cheon was, who used two Rune Snags to push Chronicler through. Amiel had to go to 4 life, before he could snag the Chronicler away from Cheon with Sower and Temptation and save himself from certain death. 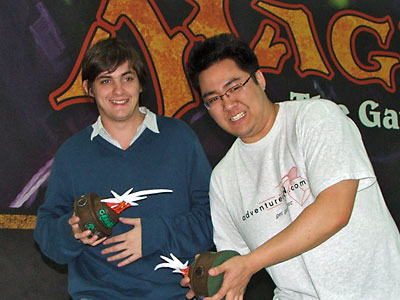 Congratulations to Paul Cheon, winner of GP Krakow, and finalist Amiel Tenenbaum!Still, Cheon had 13 life to play with. A single successful attack with anything but an Assembly worker token would mean the first American champion at a GP since ages ago. Morph from Cheon met Rune Snag for six mana from Amiel. Cheon paid. Rune Snag #2, this time for eight mana, was too much for Cheon, who let his Brine Elemental slip away. Instead, Cheon had Oblivion Ring, removing Sower of Temptation and getting back Chronicler.

Amiel was sure that Cheon had already played a land this turn when Cheon laid another one, but in the end, the issue remained unresolved. Amiel knew he had lost and extended the hand to make Paul Cheon the first American to win a European GP since ages!