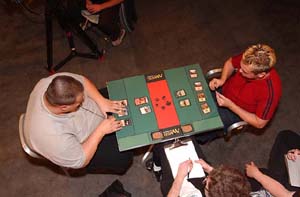 As Marco and Elijah settled into play their match the seasoned veteran explained to the rookie that he could not have paper on the table while the match was underway. Elijah was uncomfortable not tracking his own life totals but the judge put his concerns to rest by explaining how that he would keep track of the definitive life totals and both players would have constant access to the information.

Before they could even begin playing, Dirk shocked the room by announcing that he was somehow down a game before Marco and Elijah had even flipped a coin.

Elijah won the flip and elected to play first. He opened up with a first turn Druid Lyrist and all Marco could muster was an Abandoned Outpost. Elijah drew first blood—albeit a pinprick—when he sent the Lyrist into to red zone.

Elijah jabbed another pin into Marco and then played a Phantom Tiger.

Marco made his first play of the game with a turn three Militant Monk. Elijah's team rushed past him on his next turn and he kept curving out with a Possessed Barbarian.

Marco shrugged off the first four turns of the game when he cast a Teroh's faithful and went back up close to his original life total.

Elijah was holding a Worldgorger Dragon in his hand and was waiting for his sixth land. Elijah sent his Barbarian in to see if he could get Marco to trade the healer for it. Instead it bounced off of the Teroh's Faithful with no ramifications. Elijah added a Barbarian Lunatic to his table. Marco played and cracked a Shadowblood Egg. He used the mana to cast and Arcane Teachings on his Faithful and promptly killed the Lunatic. Elijah sac'd his Lyrist and killed the teachings after Marco added the Tireless Tribe.

Elijah drew the sixth land he needed and things started to heat up. He attacked with both of his men and the Tireless Tribe blocked the Tiger. Marco pitched a card to save the Tribe and prevented one from the Barbarian with the Monk. Elijah played a Forest and dropped his bomb...

The Worldgorger Dragon removed all of his permanents from the game and Marco was left staring down the barrel of a 7/7 flying trampler.

Marco chose not to smush any of his men into the Dragon and dumped his hand on the table, laying a Plains, a Battlewise Aven and a Mystic Familiar.

The game became very simple at this point. Elijah would attack and Marco would look for something to shift the race in his favor. Fortunately for Marco the Monk does not tap to attack and it could serve double duty preventing damage from the Dragon while serving for two.

Marco drew a card and sent everyone into the red zone.

Elijah sent his basket of eggs into the red zone and he was till ahead in the race until Marco cast Fiery Temper during his EOT.

Marco sent everyone in again except for a lone Mystic Familiar. He then played another Familiar and as long as he blocked correctly, Marco looked like he would win. 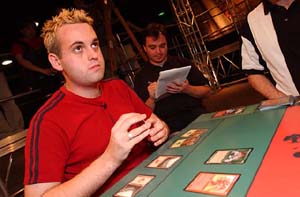 Marco double blocked the Dragon and prevented a point of damage to himself and that folks was the ballgame.

While they shuffled for the game the two players exchanged pleasantries. Elijah seemed startled by how nice all of the members of Phoenix Foundation seemed. They are just your friendly neighborhood juggernaut.

Elijah asked if playing under all of this attention made Marco nervous.

Marco: "I would be lying if I said I didn't get nervous at all..."
Elijah: "What do you do when you're not playing Magic?"
Marco: " I play Everquest."
Elijah: "I meant for a living..."
Marco: "I guess I am a professional team player."

Elijah was playing first and kept a decent hand of land and spells but Marco had the first play of the game with a turn one Tireless Tribe, which drew first blood on the second turn. Marco also dropped a Benevolent Bodyguard.

Elijah made a third turn Phantom Tiger and Marco enchanted his Tribe with Arcane Teachings during the bottom half of the turn. Elijah made a Springing Tiger on tour four and his Tiger got pinged EOT causing it to lose a counter.

Marco began piling the enchantments on his tribe with Unquestioned Authority, creating a nightmare creature for a g/r deck to deal with. Elijah did not have a fifth land and played an Ember Beast and passed the turn back. The board was starting to look more and more like an edition of Magic: The Puzzling for Elijah as Marco added the large bottomed Border Patrol to the board.

Elijah did not have any land and he used a Crackling Club to kill the Bodyguard. Marco had a Club of his own and used it to make a 4/3 Tireless Tribe that could not be blocked by creatures. To make matters more puzzling for Elijah, another Border Patrol hit the table.

At this point we all found at that Dirk had lost his match. 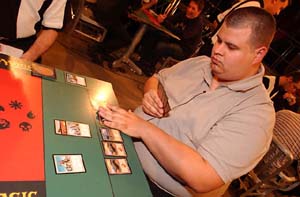 Elijah tried to keep advancing his board position and made two bear tokens with Grizzly Fate. Marco continued to send his collection of enchantments into the red zone and there was nothing that Elijah could do but watch his life slip away in fifths.

Marco kept the Tribe coming and added insult to injury by playing a Teroh's Faithful.

Two turns later it was all over. Elijah could not win even if he drew the Flash of Defiance he had been hoping to find. The Faithful put Marco out of range of the 16 points of damage he could get on the board.