Masahiko Morita really wants this win. He came close in Shizuoka, but couldn't convert. Nevertheless, his presence at the final table in two limited Grand Prix speaks volumes about his skills. And speaking of volumes, you'd need them to catalogue the accomplishments of Alex Shvartsman, who has more Top 8's than fingers. Shvartsman's deck is powerful, but he believes the matchup to be close. 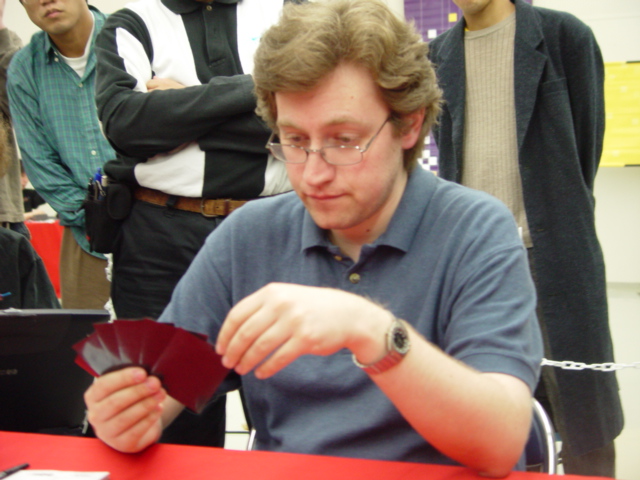 Shvartsman won the die roll and chose to play. His opening hand wasn't great, but it got a lot better when Morita mulliganed. He found a swamp on the third turn to go with his Mesmeric Fiend. He saw that Morita had Morbid Hunger, Last Rites, Fledgling Imp and Gravegouger. He robbed him of the Rites.

Down came the Imp and Gouger. Shvartsman deflected them with Aven Windreader. However, Morita went one better, busting out Rabid Elephant while Shvartsman was tapped out. He forgot to swing on the following turn, however, so excited was he to add a Dirty Wererat to his team.

Shvartsman made a Zombie Assassin and brawled for three with his Windreader. Morita sent his whole team. Shvartsman traded the Assassin and a Muscle Burst for the Rabid Elephant. Morita made a Krosan Archer and passed it back. Shvartsman held back on the Windreader, and Morita was unwilling to lose his men to it, so he waited.

Shvartsman untapped and cracked an Egg, finding Narcissism. Suddenly his hand full of lands was sheer brutality. Better still, the mana he had left over let him Syncopate Morita's Morbid Hunger. Looter strengthened his board. Morita could only add a Werebear.

But Morita wasn't done! He played Nostalgic Dreams for three, getting back the Burst, Rabid Elephant and Werebear. Shvartsman's Gravegouger showed up a turn too late. This time the Muscle Burst cost Shvartsman his Narcissism. Then he drew two successive lands, and the Rabid Elephant did him in. Shvartsman's green splash was unkind to him again in game two, giving him both of his forests and no islands. However, he had an Egg to enable a Balshan Collaborator, and it coincidentally got him a Tainted Isle. His Gravegouger never got to hit, because Morita had made a Springing Tiger.

That was unacceptable to Shvartsman, who Aether Bursted it out of the way. Morita replayed it, and the Gravegouger tackled it with the help of Afflict. Narcissism was his next play, and as if Morita hadn't taken enough pain, Shvartsman came over the top with Laquatus's Champion. The whole affair took mere minutes.

Shvartsman kept a five-land hand for the final game. Morita was kind enough to put out an unprotected Basking Rootwalla, and Shvartsman's Afflict paid dividends. He matched Morita's Dirty Wererat with Psychatog. Morita Butchered it and started swinging.

Shvartsman slowed things down with Aven Windreader. Morita had no tricks up his sleeve, so he just played a Springing Tiger and waited. Shvartsman was happy with that, holding Aether Burst, Muscle Burst and Syncopate. When Morita sent his Tiger, he surprised by the Burst freeing the Psychatog, who ate the Tiger. The Syncopate stopped the Butcher from making an encore. Shvartsman even added Soul Scourge to his team.

Morita was clearly rattled. His Rabid Elephant did nothing to stop six damage in the air. Zombie Assassin only added to his troubles. He had Shower of Coals, but Muscle Burst saved the Scourge, and the Psychatog snacked to stay alive. Only the Assassin fell.

Shvartsman swung with the team. He lost his hand and graveyard trading his Psychatog for the Rabid Elephant. The only thing that mattered was that Morita stood at one life. He could sense victory.

But then, Morita dropped his sixth land. It was Morbid Hunger! Suddenly, he stood at seven life. The spectators gasped at the turnaround, and new hope flared for Morita. Shvartsman hit with the Windreader and passed it back.

Morita showed him Nostalgic Dreams, and it was all the crowd could do to keep from cheering. He got back the Hunger and Shower of Coals. Shvartsman's Gravegouger was again late for the party. The game that seemed unlosable was slipping from his grasp. Morbid Hunger took down the Windreader.

Could Morita do it? Shvartsman knocked his deck.

The crowd gasped. Shvartsman's untapped swamps meant Morita was unable to stop it. When his next draw step yielded nothing, he extended the hand in defeat.