Most people watching the draft agreed on two things. They all felt that Illuminati outdrafted the Jokas. They also all felt that Alex was going to lose. Alex had a U/W deck and Norman was playing R/G with three Arcane Teachings. Unfazed by popular opinion Alex prepared to do battle with one eye on winning the tournament and another on the Master's slot that lay beyond. 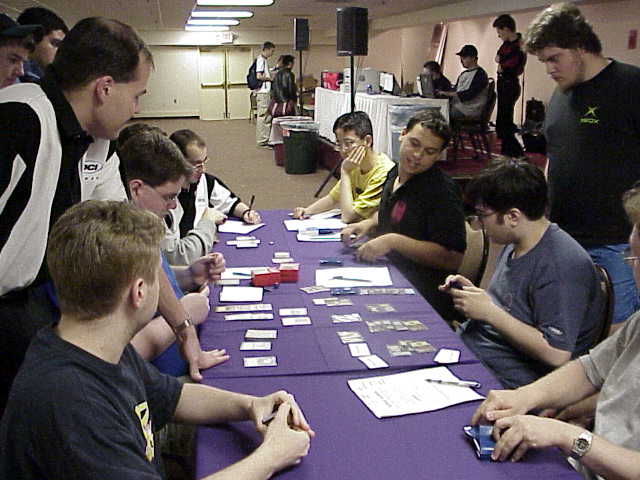 Norman won the die roll and elected to play first. He opened with a forest and Druid Lyrist while Alex played an island. Norman chipped Alex's life to nineteen, and passed the turn but not before Alex Searched Obsessively. Alex had another passive turn, which was followed by an aggressive one on Norman's part. Arcane Teachings on the Lyrist brought Alex to sixteen. Alex played a land and a Reborn Hero. Norman was out of land but not creature enchantments- Crackling Club made the Lyrist the most ironic 4/3 creature of all time. Alex was at twelve. The Reborn Hero knocked Norman to eighteen without attacking and Alex played a Web of Inertia. Everyone leaned over to read the card and then leaned over to look at Norman's empty grayeyard. Norman had a handful of four casting cost spells but didn't draw land. Fortunately, he drew Wild Mongrel. The Mongrel came into play and allowed Norman to pitch an impossible-to-cast Pardic Lancer, which was promptly removed to smash Alex down to eight. Alex played a land and a Border Patrol to stymie Norman's side of the table. Norman continued to fail to draw land and could only pass the turn. Alex played a Wormfang Drake, removing his Reborn Hero, and went down to seven when Norman pinged him with the Teachings. Finally, Norman drew another land and was able to play a Chainflinger. Alex attacked Norman down to fifteen with the Drake, and played Scrivener fetching the Obsessive Search. He was shot down to six at the end of the turn. Norman drew another land and could play a Dwarven Bloodboiler, but would rather double ping at the end of the turn. Alex managed to get Norman down to twelve with the Drake, and main phase searched to find a Hallowed Healer which got Clubbed at the end of turn. Alex went to four from the pingers. The Scrivener got Thermal Blasted, and Norman was able to alpha strike for the kill.

All of Illuminati's game ones were either losses or looking bad at this point, and Alex could be seen visibly trying to summon his concentration for this crucial game. He played first and opened with a plains. There would be no one drop for Norman this game, but Alex had the turn two Aquamoeba. Norman had no turn two play either, and got attacked to nineteen on the next turn. Alex played a Nomad Mythmaker, which was a key card in this match-up- crucial enough that Norman untapped and killed it with a main phase Fiery Temper. Alex took him to eighteen, and played a Hallowed Healer. Norman enchanted the Healer with Crackling Club, and clubbed it before it came online. Alex was undaunted, and played a Mystic Familiar after attacking him to seventeen. Norman played a Nantuko Calmer and made a Chatter token. Alex's Aquamoeba was blocked, and Alex pitched two cards to flip and save it after killing the Calmer, and then played a Dreamwinder. Norman played a Dwarven Driller, and flashbacked the Chatter. Aquamoeba continued its Terminator impersonation, and killed them both in combat. Alex played another land and sacced it to allow his Dreamwinder to attack. Norman came prepared with the Thermal Blast, but Alex was a better Boy Scout with his Embolden, and Norman's life dropped to nine. The thresholded Mystic Visionary was too much for Norman's so-so draw and they shuffled for game three.

Norman opened with forest and a Chatter token. Alex had kept a one land hand with island and Obsessive Searches. He would cast three this game and never miss a land drop. Despite a fistful of creatures, Norman stalled out on land and could only drop one and two toughness men. He was one forest shy of casting Overrun for most of the game, but every turn he didn't drop a land, Alex dropped a creature with a toughness of four or greater. While Norman continued to want for land, his two teammates defeated Justin and Zvi. In the end Alex would win the seemingly unwinnable match, but it would be for naught.

1 Dwell on the Past 1 Invigorating Falls