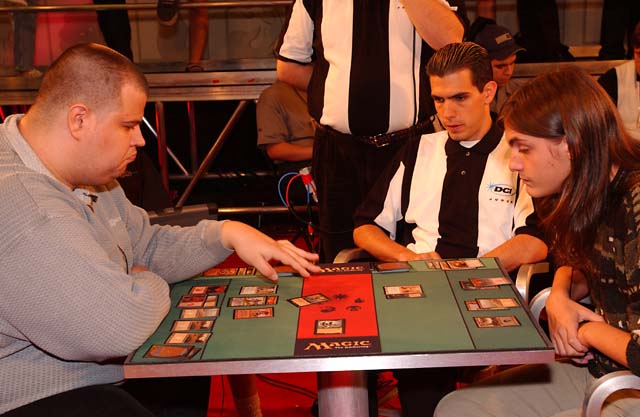 Amiel Tenenbaum is the only player on Les Plus Class with no previous Pro Tour experience. He's obviously doing very well considering that he is one match away from being a Pro Tour Champion on his first try. He also apparently has no problem with playing for the cameras, and has been quite entertaining due to his facial expressions during the drafts. He is playing black/white/red with a slightly shaky mana base, while Blume is playing white/red with a splash of blue for Silver Drake and Repulse. The difference maker in this matchup may turn out to be the two Crimson Acolytes in Blume's deck. Tenenbaum told me that his strategy was for Blume to get mana-screwed, and he even showed me the Dwarven Landslide in his deck that he hoped would help the plan.

Tenenbaum went first, and started off with a Dega Disciple. Gerrard's Verdict followed on turn two, and Blume discarded Dominiaria's Judgment and Prison Barricade. Blume had a key turn two Crimson Acolyte, and Tenenbaum brought out a second Dega Disciple. Tenenbaum had no red mana out, but could hold off future attacks with the black ability. With the help of a Sulfur Vent, Tenenbaum brought out Zombie Boa, which Blume nullified with Manacles of Decay. The game now reached an awkward point, where both players were stuck at three lands, and were looking to draw a key colored mana source.

Blume was the first to achieve this, as he drew a mountain and summoned Goblin Legionnaire. Tenenbaum eventually found a mountain, and would be able to start playing the cards that had been sitting in his hand. Blume summoned Bloodfire Kavu, which works very well with Crimson Acolyte. Still, Tenenbaum had a Phyrexian Reaper on the offensive, and it was dealing five damage each attack with a little help from a Disciple. If Tenenbaum drew a second red source, it would allow him to activate both Disciples.

Tenenbaum only had a Dega Disciple untapped, and Blume sent his team into the Red Zone. The Disciple's black ability made the Legionnaire smaller, but a Tundra Kavu and Bloodfire Kavu got through for four damage. The Bloodfire Kavu's special ability was then activated, which produced a strange reaction out of Tenenbaum that confused the judge and Blume. It resolved, and both of Tenenbaum's Disciples headed to the graveyard. 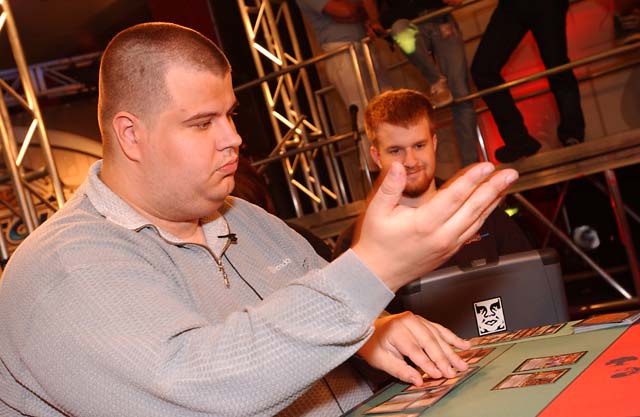 The Phyrexian Reaper continued to attack, and Blume was now at six life points. Tenenbaum followed up with Phyrexian Broodlings and commented "Only 3/3 Zombies!" Blume realized he had to go on the defensive, and played Squee's Embrace on his Goblin Legionnaire and ended the turn, leaving the 4/4 back to block. Tenenbaum wasn't intimidated, and sent both his creatures into combat. The 4/4 Legionnaire blocked the Broodlings, and the Tundra Kavu blocked the Reaper. The Tundra Kavu and Broodlings headed to the graveyard, as did the Crimson Acolyte due to the Broodlings' special ability. Tenenbaum then brought out Shivan Zombie, which would be able to get through Blume's monster Legionnaire, or hold it off on defense.

During Tenenbaum's end step, Blume sacrificed his Legionnaire to deal two damage to the Reaper, which killed it. The Legionnaire came right back to Blume's hand thanks to the Embrace. It came back down on the following turn, and was joined by Flowstone Charger, which generated a gasp from Tenenbaum. Even though this board position was bad news for Tenenbaum, Blume was at six and had no way on the table to deal with the Shivan Zombie. It attacked, and Blume went down to four. Blume attacked for seven with the Charger and Legionnaire, and Tenenbaum used Captain's Maneuver to redirect four damage back to Blume. In response, the Legionnaire's white ability was activated, keeping Blume alive.

Blume was now at two, and needed a way to block Shivan Zombie. He didn't summon another creature, but he did something even better- he cast Death or Glory. The piles presented by Blume were Tundra Kavu/Legionnaire and Crimson Acolyte/Bloodfire Kavu/Prison Barricade. Legionnaire gave Blume the two creature pile. Tenenbaum drew and told Blume "I'm sorry, you're at two?" and finished off the game with Death Bomb- a spell that is starting to become a signature card for Les Plus Class.

This did leave Blume tapped out and unable to use his Acolyte. Tenenbaum used the window of opportunity to sacrifice his Legionnaire, and trade it for one of Blume's. He had nothing else, and Blume took his time untapping lands, flipping over each one with conviction. Tundra Kavu attacked, and traded with Morgue Toad. Blume then brought out Ancient Kavu, and things looked bad for Tenenbaum, who had no non-land permanents in play. Tenenbaum did have his tech play as he cast Dwarven Landslide with kicker. This took out an island and a mountain, and left Blume with only three plains out. Still, Blume had six damage coming through every turn, and Tenenbaum needed to find a way to stop it. He didn't have an answer, and the match went to a third and deciding game. 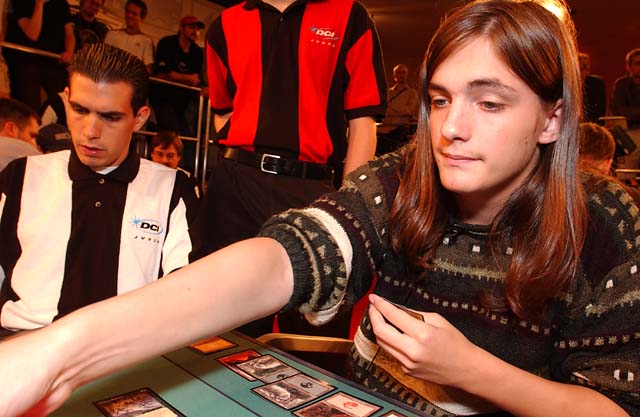 Both players drew their opening hands, and Tenenbaum let out a whine of discomfort, and the emotion seemed to become more intense with every card he looked at. He thought for a bit, and decided to mulligan his opening hand. By comparison, Tenenbaum was visibly excited with his next hand. He was probably even happier with Blume taking a mulligan of his own. At this point Dirk Baberowski had won his match, and the pressure was on Tenenbaum, who had to win this game to keep his team's hopes of Pro Tour glory alive. Tenenbaum and Blume had to wait to start playing, and Tenenbaum became restless. "I want to play! I have a great hand! I came to play! PLEASE! Only two minutes!" Kai won his match, and clinched it for the Germans so the match was not finished.