In a re-match of the 2000 and 2001 Victorian State Championships Andrew Grain takes on Andrew Gordon. Grain beat Gordon in both of their last finals, with Gordon more seemingly worried about losing bragging rights as opposed to the first place cheque. 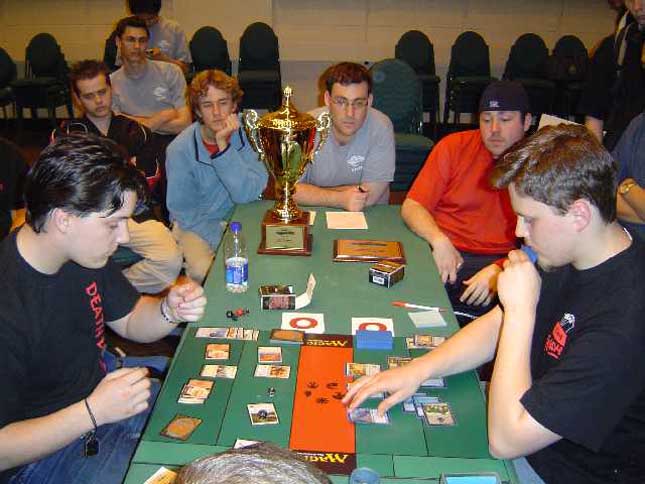 Grain elects to play and happily accepts his initial hand of 7 cards as does Gordon. Opening with an Iron Myr, Gordon replies in kind with a Copper Myr, which is dealt with quickly by a Granite Shard.

With poise and grace of a chess master, Gordon, gets a shard of his own with a Sculpting Steel. Unfazed, Grain expands his mana base with a

talisman and the ever-threatening Goblin Replica. Gordon, in kind picking off the Myr for 3 mana.

Grain heads to the red zone, attacking with goblin, bringing Gordon down to 18 - the first damage of the match - which he follows with an Auriok Transfixer, and another Myr. With nothing on the fifth turn, Grain is left to Raise the Alarm, attacking with 2 more tokens, leaving Gordon to do nothing but pick off Grain's now superfluous Myr.

A sixth turn unblockable Neurok Spy gave some defense but the ever-reliable Granite Shard brought Gordon down to 12.

The Neurok Spy was short lived however, being picked off readily by a Pyrite Spellbomb. Grain threatened to halve the clock, by dropping a Viridian Longbow - thus giving Gordon a mere 3 turns. To reply to this a Rust Elemental and a Somber Hoverguard came down, to try to put some offense on the board. Tapped out Gordon could do nothing about Grain equipping a soldier token to combine with the Shard to dispatch the Hoverguard, immediately picking it off the following turn with the Sculpting Steel.

Gordon retrieved a Myr with a Moriok Scavenger, offering a tasty snack for the Rust Elemental, however only being on 7 proved to be a problem, with Grain attacking with the Goblin Replica, trading with the Moriok, and with damage allocated - picking off the last artifact in Gordon's control (Sculpting Steel).

Needing to drop answers and find some more, Gordon was able to cast the retrieved Myr, a Welding Jar and a Thoughtcast for only 2. As a last act of hopeful defiance, a Relic Bane was produced for the game-winning MVP, Granite Shard.

Grain untaps, deals 1 damage to the Myr and Shatters the Welding Jar to have the Rust Elemental hit Gordon for another 4 life in his upkeep - dropping him to -1.

Gordon elected to play in Game #2 hoping to get a better start than last time. It was Grain off to the quick start however with a first turn Auriok Transfixer. Gordon expanded his mana base a Silver Myr on his second turn before being hit for 1, as Grain followed with a Banshee's Blade and a Skyhunter Cub.

Gordon lays a Moriok Scavenger, and takes the lead for the first time in either game attacking for 2, following it up with another Myr (Copper).

Equipping the cub with the blade, Grain goes in for 3 in the air, leaving Gordon to retaliate with the smaller Moriok - a race he knows he can't win.

A Raise the Alarm at the end of turn enabled Grain to swing past for another 3 points, moving the Blade to the Transfixer, Grain goes on the offensive with scout and the 2 soldier tokens. The Transfixer is taken down however by the 3 Myrs, putting Gordon down to 14.

Grain continues to ferry the now charged-up Blade to the soldier tokens to attack with and hand back off to the Cub.

At the end of turn however the cub was removed with a Betrayal of Flesh, which also brought back the Silver Myr. Gordon, on the offensive this time swings in with the Myr and the Moriok, putting Grain to 13, following it up with a Somber Hoverguard and a Welding Jar - the tables well and truly have turned. Grain however was unfazed by the loss of the Cub, swinging in again with the equipped soldier.

Gordon, getting to the crux of the problem, drops a Relic Bane on the Banshee's Blade, and with Grain's first payment on it drops him to 8 (Gordon is on 7).

Against 2 soldier tokens, with the Myr back to defend and a Welding Jar to prop it up the Hoverguard was able to get ready for a 2 turn. 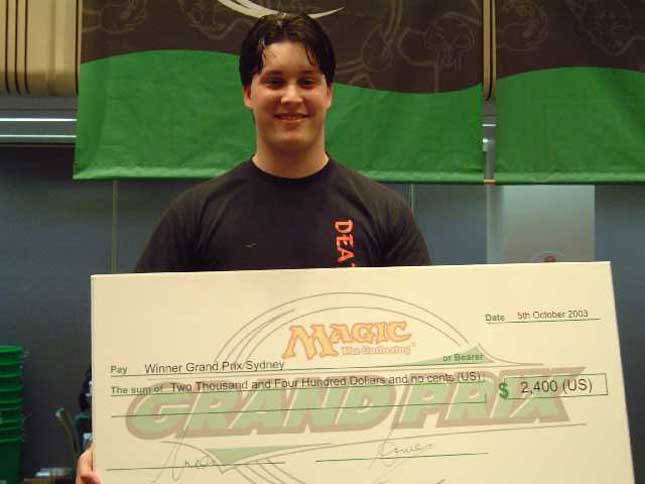 An entwined Grab the Reins was able to distract the Myr off (regenerated with the Welding Jar), and swing with the Bladed 5/5 soldier and the "borrowed" Moriok for the exact 7 damage for the game the match and the championship - Andrew Grain has taken out the 2003 Grand Prix Sydney!