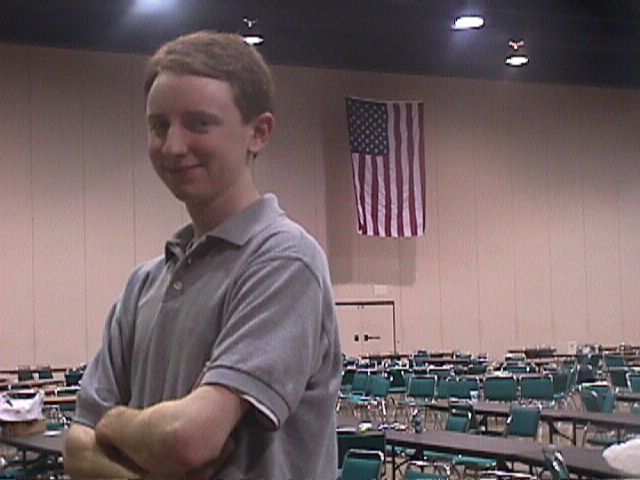 Eugene HarveyTeam CMU has done it again. Four years ago, Randy Buehler came into the Peach State and went home Grand Prix Atlanta champion. History was about to repeat itself, as Team CMU's Eugene Harvey and Andrew Johnson sat down to face off in the finals of this year's Grand Prix Atlanta.

Sitting down across from each other the atmosphere was very friendly. At first Andy quoted Searching for Bobby Fisher when he offered the draw to share the championship.

After the humor of the comment subsided, Andy won the die roll and elected to play.

Eugene cast a turn two Angelic Wall, at which point Andy cast Ember Beast and Halberdier, and then Eugene brought out the first of his five main deck Mystic Zealots.

Andy swung with both the beast and the soldier, and Harvey chose to only block with the Wall taking the first points of damage he received in the top eight. Johnson cast a Chainflinger before passing the turn

On Harvey's turn he brought out a Phantom Whelp and said go. Johnson wasn't as eager to attack with Harvey having mana available and instead cast his second Chainflinger. Eugene then cast an Aven Windreader.

With Harvey tapped out, Andy sent in the Ember Beast and the Halberdier to have Phantom Whelp jump in the way to prevent three damage.

On Eugene's turn he attacked with the Windreader and then took two from Chainflinger. 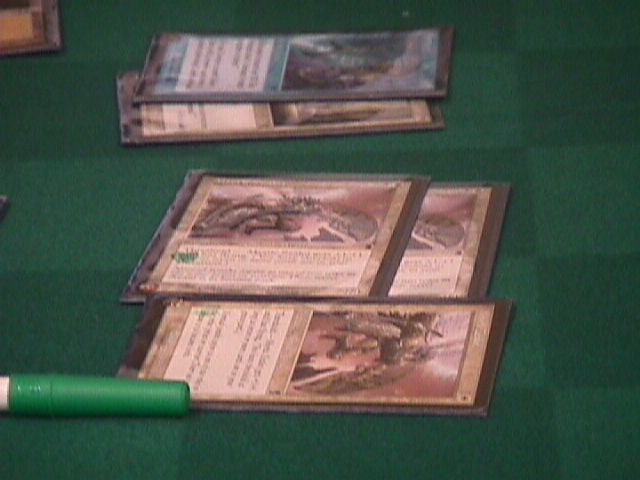 Half of Eugene's Zealot army.The big attack of the game came when Johnson Reckless Charged his Halberdier, and then attacked with everything. A Chainflinger was blocked by Mystic Zealot, and Ember Beast was stopped by the Angelic Wall. Andy decided to cast Sylvan Might on the blocked Chainflinger, so Eugene double cast Embolden saving his Mystic Zealot and shielding himself for seven. Andy cast Mad Dog and passed the turn.

Eugene cast his second Zealot and then held back his creatures anticipating another large attack from Johnson. That attack came after Andy flashbacked the Reckless Charge on Mad Dog, and cast an unthresholded Demoralize.

While Andy mimicked the sound of the Goblin War Drums, Harvey almost scooped, but at the last second figured everything out. Two Zealots blocked a Chainfliger, and the Angelic Wall and Windreader blocked the extremely Mad Dog. Eugene then saved the Windreader with Shelter after Andy assigned lethal damage to it from the Dog. On three life Eugene wasn't in great shape, but at least he only had one Chainflinger left to deal with.

Eugene then swung with both Zealots and the Windreader to drop Andy to ten life.

Johnson sent everything, Ember Beast, Halberdier, and Chainflinger so Harvey blocked a three power creature with the Wall, cast a second Embolden, and took one point of damage down to two life. Johnson could have sent a Scorching Missile at Eugene's head to force him to Embolden again, forcing the blue-white deck to come up with an answer to a thresholded Chainflinger, but instead decided to pass the turn.

Harvey sent in a Mystic Zealot and an Aven Windreader, which knocked Johnson to five life. Then Harvey brought out an Aven Cloudchaser which left him with leathal flying damage on the board.

Having only six mana, Johnson was unable to both cast Scorching Missile and use the two damage ability on Chainflinger. Unable to play around Embolden, Johnson tried to Chainfling the Aven Cloudchaser but Eugene wisely decided to Embolden and then swing in for the win.

Andy brings it with a Squirel, and flashbacked the Chatter. After taking two more from Squirrels, Johnson brought out a Barbarian Lunatic. Harvey probably ended Johnson's dream of being the second highest Pro Tour money winner on Hobart Street when he dropped down the Pilgrim of Justice.

After Springing Tiger was plopped into play, Harvey dropped down the Blessed Orator. After Eugene correctly blocked Springing Tiger with the Pilgrim Andy cast double Chatter and a Halberdier.

Things looked very bad for Johnson when the Pilgrim became even better with a Psionic Gift and shot the Barbarian Lunatic. In a last ditch effort to save the game Johnson swung with everything, four Squirrels, Springing Tiger, and Halberdier. The Orator took down Halberdier and Embolden saved Harvey four Squirrel damage leaving Harvey at fifeteen.

Harvey summoned a Mystic Zealot and shot Halberdier with the gifted Pilgrim.

Johnson saw how utterly hopeless the game was and packed up his cards, thus ending perhaps the fastest Grand Prix final match in history.