Finals: Atlas and His Brothers

It is not often that I get to write about a fellow countryman in the finals of a Pro Tour. When Richard Bland was at 1-3 in Standard on Thursday, it seemed unlikely that I'd be writing a great deal about him, but from there he went on an incredible run, showing himself to have a fighting spirit by winning more or less every match from there until the Top 8, with only a draw and a loss to Paulo Vitor Damo da Rosa keeping him off a perfect run.

Going into the Top 8, Bland had to face Luis Scott-Vargas, who was pushing to become player of the year. There he took it down in a tense five-game set, where mana issues made life rough for LSV, and a relentless sea of tokens from the unassuming Englishman capitalised on those issues. His semifinals saw him running over Canada's David Caplan in three lightning-fast games. There his deck was well positioned to do its thing without being disrupted by Caplan's burn. 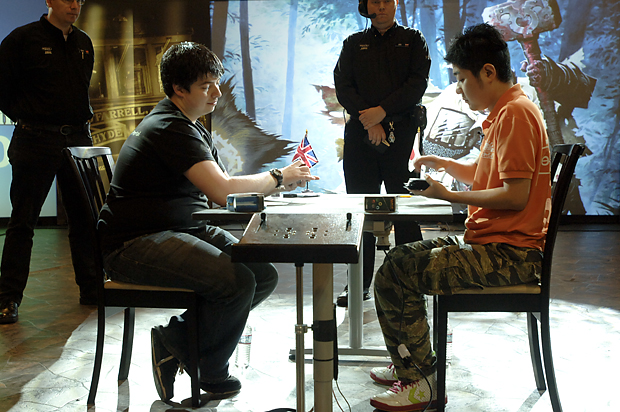 For the finals, the match-up was Bland's Green-White Tokens against Wolf Run Ramp, the red-green mana ramp deck with which Jun'ya Iyanaga of Japan had been very successful. Iyanaga, who also competed in the Magic Online Championship this weekend, had found himself in a Top 8 studded with ChannelFireball stars, where his deck was very well positioned to perform at its best. He took down Josh Utter-Leyton in the quarterfinals, and claimed another ChannelFireball scalp in the semifinals when he finally put an end to the dream Conley Woods had been living at these World Championships. Iyanaga played the same deck in the MOCS as he did in the main event, and going into this match he has only lost one match out of twelve. Would it be lucky thirteen for the 24-year-old Japanese student?

It was a less than ideal start to the finals of the World Championships as Iyanaga, on the play, took a mulligan to six, while Bland, on the draw, was on a mulligan to four. Iyanaga's start looked a strong one. Rampant Growth on turn two led to Solemn Simulacrum on turn three.

Bland had a turn-three Blade Splicer, whose first strike would mean that Solemn Simulacrum couldn't simply get stuck in with Kessig Wolf Run backup. Rich wasn't about to hold back, though, getting stuck in with the 3/3 Golem. It was blocked by Solemn Simulacrum, and after a Galvanic Blast killed off Blade Splicer, the robots traded (with some help from Kessig Wolf Run for Iyanaga).

Despite starting on four cards, Richard Bland was making a game of it. He cast a Hero of Bladehold, which prompted a Green Sun's Zenith for Thrun, the Last Troll from Iyanaga. Bland fired back with a Blade Splicer, to which Iyanaga found a Primeval Titan fetching two copies of Inkmoth Nexus. 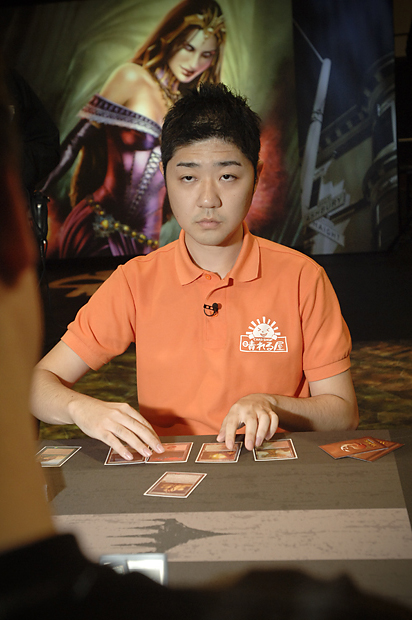 Iyanaga, having gone through some very rough competition, now stares down Green-White Token Town in the finals.

A second Blade Splicer came from Bland. That Primeval Titan would die to first strike if it attacked. Instead Iyanaga went to the air, getting in for a scary five poison in total. Bland would have to pull out something big to take the game, as one more poisonous hit in the air would do it. Bland drew for the turn and found... Avacyn's Pilgrim. Not enough, but he kept an unreadable expression and forced Iyanaga to go for it to take Game 1.

For the second game there were again mulligans, this time taking Bland to six cards, and Iyanaga to five, in spite of Bland's suggestion that it might be polite for Iyanaga to go down one more card. 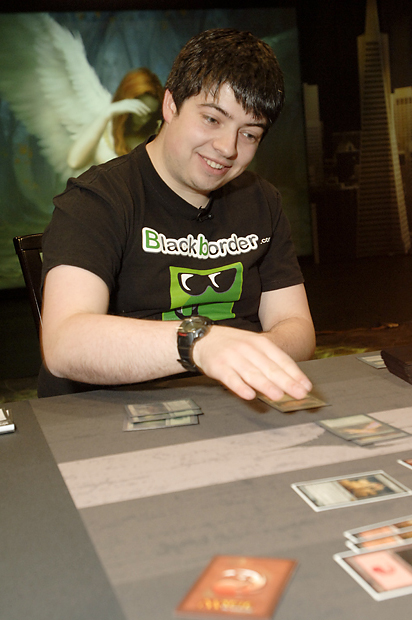 Richard Bland, down a game, was happy to see his opponent go to five.

Iyanaga's start was, if anything, a little better than Bland's, as the Japanese player ramped up nicely with Rampant Growth and Solemn Simulacrum. Bland, meanwhile, missed a land drop and was a turn late with Garruk Relentles, playing a Sword of War and Peace on turn three. That missed land drop really hurt, as it gave Iyanaga the time to cast an Inferno Titan that killed off Bland's Wolf token and cleared a path for Solemn Simulacrum to kill Garruk.

Even though Bland had four lands, their Plains / Forest / Forest / Gavony Township arrangement would not let the Englishman cast either of the copies of Hero of Bladehold in his hand, which would be crucial in getting him back into the game.

A Primeval Titan from Iyanaga looked to be the nail in the coffin for this game as far as Bland was concerned. His protection from red (and white) Birds of Paradise would do little against an Inferno Titan once it could trample. In a desperate play, Bland attacked with Birds of Paradise, knocking Iyanaga to 13, while he went up to 16. There was little use blocking with it now. He cast a Thrun, the Last Troll and passed.

Iyanaga cast a Sphere of the Suns, and activated both copies of Inkmoth Nexus. He didn't attack with them though, instead choosing to cast Galvanic Blast to put Richard to 12 life. Another one made it 8 life. Richard laughed a little as a third Galvanic Blast came his way. When the fourth came, he had no response at all but to scoop up his cards. 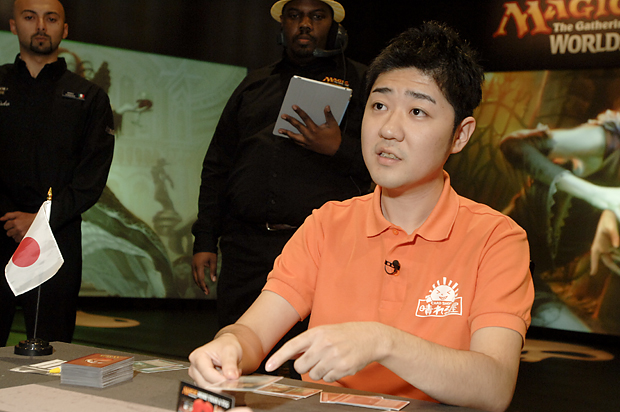 Hey! The metalcraft on Galvanic Blast is explosive!

For the first time in the match, a player started on seven cards. Richard Bland, on the play, liked his seven, though Iyanaga did still go down to six. Iyanaga had a Galvanic Blast for Bland's turn one Avacyn's Pilgrim, and the Englishman replaced it with a Mortarpod. Iyanaga, meanwhile, was ramping his mana again, first with Rampant Growth, and then with Solemn Simulacrum.

Bland had little to cast, while Iyanaga went still further up on mana with another Rampant Growth putting him at the magic six-mana mark—Titan mana.

The Titan that came along was Inferno Titan, which killed off the Germ holding Mortarpod and got Bland for a cheeky point. Again Bland was short on white mana for just a little too long, being a turn or two late in casting Hero of Bladehold. A second Inferno Titan from Iyanaga dealt with the Hero and left Bland unable to block. One draw step later he was extending his hand, to be the first to congratulate Jun'ya Iyanaga of Japan, the 2011 Magic World Champion! 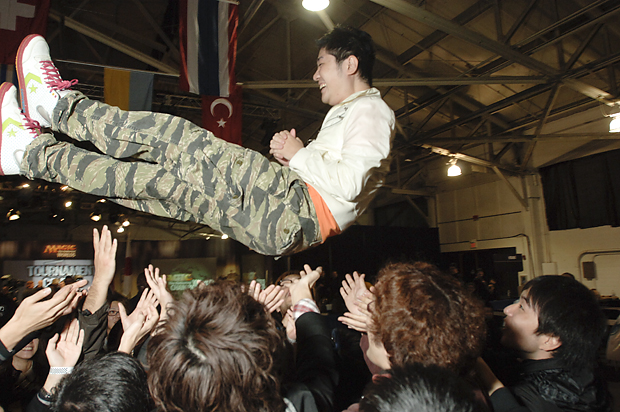