Finals: Auction of the People

Share Article
Share Tweet Share
started four days and many miles ago at E3 in Los Angeles will finally be resolved here on the stage at Pro Tour - San Diego. The 2004 Magic Invitational has been whittled down from 16 players to 2--Bob Maher of the United States and Mattias Jorstedt of Sweden.

Jorstedt should have the edge in the fatigue department--he missed Day 2 of the Pro Tour and has been doing little but lounging around all day. Bob, on the other hand, has spent the better part of today drafting and playing rigorous matches against his Pro Tour peers. As the players waited for the event to start, Maher's head was in his hands, his eyes drooping as he struggled against the weight of the day. Mattias, on the other hand, looked spry and ready to battle.

The Finals will be determined by a best 2-of-3 rounds in best 2-of-3 formats. Leading off is the Auction of the People--each player has a deck built by a reader of MagicTheGathering.com made of cards all by a particular artist. Maher is wielding a three color Heather Hudson deck called "Aethereal Emergence" centered around the Invasion enchantment Aether Rift. Jorstedt is playing a Christopher Moeller deck with powerful individual cards like Meddling Mage and Triskelion. Maher is handicapped three life in the format, and Jorstedt starts the game down a card and 8 life.

After what felt like an eternity waiting for Mark Rosewater trying to log in and watch the game, the match began.

Mattias played a turn 2 Compulsion and Bob had a turn 2 Basking Rootwalla. Mattias used Compulsion to find a third land (as Bob chanted "no land, no land"). The Rootwalla hit for three (a quarter of Mattias's depleted life total), the Mattias, already down to two cards in hand, summoned an Aven Fisher to chump block. The bird did it's job, but Bob then turned up the heat with Earsplitting Rats, which he used to madness out another Rootwalla.

Mattias had an out, though. He drew land #6 and played Triskelion. The big artifact shot all three of Bob's creatures, and Bob discarded a card to save his Rats.

The Triskelion blocked the Rats, but Bob saved them again and played Geth's Grimoire, negating the Compulsion. Mattias calmly played out two Walls of Spears.

At this point both players just started committing permanents to the board. Aether Rift from Bob put and Prowling Pangolin into play for free, and a Screeching Buzzard came him some air power.

Mattias was drawing well, and Confiscated the Buzzard allowing his recently played Thieving Magpie to get in for a card. A third Wall of Spears gave him enough first strike power to stop the Pangolin.

But Bob was still going. Bearscape allowed him to turn his graveyard into creatures, and once he had five creatures in play, he sent the team. But, much to Bob's dismay, Mattias had Blessed Reversal and gained 15 life.

The life cushion allowed Jorstedt to block well, and the board position turned around from there. Two Aven Fishers from Mattias gave him the attackers he needed to get over Bob's remaining ground guys, and a few turns later, Mattias was up one.

Bob mulliganed but had a turn-1 Basking Rootwalla much to Mattias' chagrin. Mattias played a Meddling Mage on turn 2, naming of all things. Unfortunately he never drew a third land, and the Rootwalla hit him until he was dead.

Mattias stopped at two land for the second straight game. Bob had no early Rootwalla to punish him this time, however, just a turn 3 and a turn 4 Prowling Pangolin.

The Pangolin only needed to hit twice to kill Mattias, and did so on the next two turns.

On to Mirrodin Block Constructed… 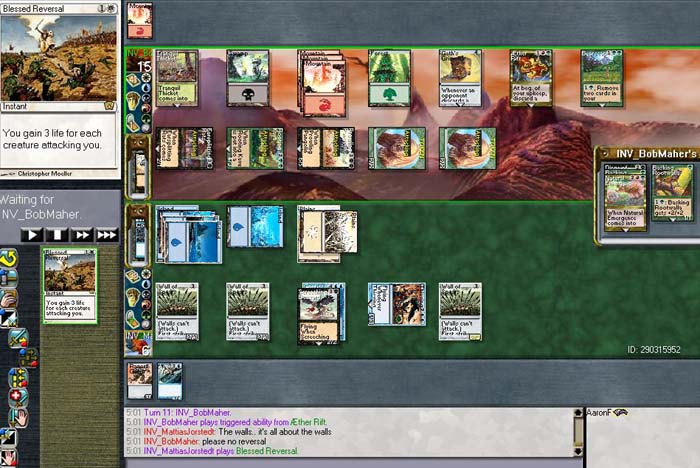