This is it. Everything rests on this. On the one hand you have the ultra-snazzy title of "Grand Prix-Boston Champion", a cool cheque for $2,400 in your name and a brand new paperweight, er, I mean trophy for the desk. On the other, you have the not-as-snazzy-but-still-cool title of "Grand Prix-Boston Finalist", a cheque for a little bit less, $1,700 and a smaller paperweight. Hey, at least it's easier to lug back home, although you do lose some of the "Oooooh! Aaaahhh!" factor in there. 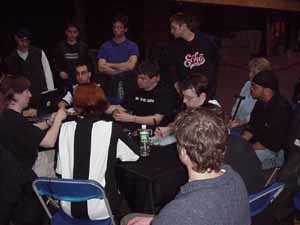 Matthew Cory is the sole survivor from the massacre of amateurs that entered the tournament for search of the promised land yesterday. Right now, he is already taking the amateur prize of $1,500 back home for winning that portion of the cash purse, but a few extra thousand or so bucks here couldn't hurt. It was an ante match for $700, which is probably the highest amount of money Cory's ever played Magic for. In fact, for those who still do not know, Cory has never played a sanctioned match of Limited before this event, meaning that he entered this tournament with a 1600 Limited rating. (One can only imagine how much that has ballooned over the course of this weekend.)

Standing in his way between him and the title "Hero of the People", is none other than the dragon lord, the heartthrob, the hero of the kids, call him what you will, Brian Kibler. Kibler is out here, grinning at the aspect of adding this Grand Prix to his list of accomplishments (and actually get a physical trophy- no he did not in fact get a trophy for Grand Prix- Toronto way back when).

Kibler came out strong, with Whipcorder and Gustcloak Harrier, which was stopped partway with Cory's Sage Aven. Crown of Suspicion finished off the Aven after combat, and things were starting to look glum for Cory and his hand of land. Kibler aggravated the situation with a Gustcloak Sentinel. Gustcloak Skirmisher was next in the Kibler recruitment line, and when Cory made an attempt to Solar Blast the Gustcloak Sentinel, Kibler had a Piety Charm at the ready. The situation was made particularly annoying by the fact that Cory could not kill off the Gustcloaks in combat, thanks to their ability. Glory Seeker, Entrails Feaster came in to join the crusade. Down to just four life, Cory drew the Chromeshell Crab that the Sage Aven fetched him. Putting into play face down, the plan was set.

Then Kibler topdecked Akroma, Angel-that-is-Way-Too-Broken-In-This-Format. If Cory was not yet convinced of scooping, he sure was now. One can only wonder what might've happened had the Angel come one turn earlier and was switched with the Crab.

Cory: "That was quite possibly the worst hand I have ever kept so far today."

Cory: "See, I feel inferior. Like, your semifinal match had a crowd a little bit bigger than mine. Ben Rubin is more well-known than I am."
Kibler: "Er, I played Rubin in the quarterfinals."
Cory: "Right." 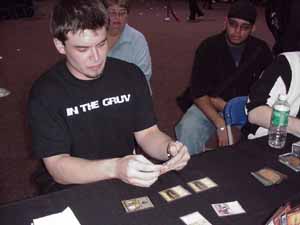 Kai came down on turn two, as a solution to potential problems. He was matched with a Glory Seeker from Kibler, and then the morphs started to roll in. Keeneye Aven from Cory provided a stop to Kibler's assault, and the game slowed down to a crawl, much to the chagrin of my laptop's dwindling battery lifespan.

Kibler attacked with the Glory Seeker, representing some form of trick, but Cory blocked anyway, perhaps thinking that he still had the Prodigy to counter a Piety Charm if he really must. Unfortunately, Kibler then unmorphed a Gravel Slinger to take down the Aven, but at least it still traded, card for card. A Wingbeat Warrior came into play, but Cory turned over Kai's Apprentice (I wonder who…) to put an end to that. Cory was now playing a very defensive game, holding Sage Aven and Backslide, each providing an additional form of countermagic.

The Glory Seeker went in once again. Cory double blocked with a morph and the Voidmage Apprentice, to which Kibler then tried to shoot it down with the Gravel Slinger. Cory held Backslide at the ready, and when damage was finally stacked, Kibler decided that killing off the counterspell was probably the best option. When Cory passed his turn without doing anything, something had to be up. Kibler attacked with the Gustcloak Sentinel and Cory blocked with the morph. When it was confirmed that the Sentinel decided to stay in combat, Cory tapped six and unmorphed Rockshard Elemental. Fortunately, Kibler's Aven Redeemer was enough to reduce the impact of first strike to the extent where the Sentinel and the Elemental could still trade in combat.

"Somehow, I feel like it's a good trade for me." - Brian Kibler 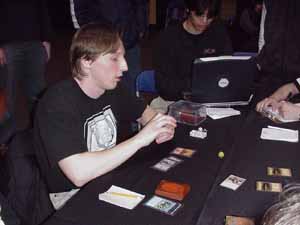 Sage Aven hit the table, stacking the next four draws for Cory. Things seemed bleak enough that he felt obliged to lapse into thought over whether the sacrifice something just to counter Kibler's lowly Glory Seeker, which lay on the stack for a good, long while before Cory finally decided to sacrifice the Voidmage Prodigy to counter it. Of course, such an action would not go without some form of comment from Kibler.

"Whew! Brutal! Grizzly Bears are too much for Kai!" - Brian Kibler

Still, the Sage Aven had foreshadowed nothing but land on the top of Cory's library. Kibler managed to deal with the Aven eventually with the Gravel Slinger when it was finally convinced to block. With lands still in Cory's hand, and down a creature count of zero to three, it was really only a matter of how to do it. Of course, with Kibler, it's always about style.

He tapped eight. Guess who showed up. And that, as they say, is that.