It's been said by many players that in the OLS limited format, the color matchups are secondary, and it's the individual cards that matter. Nowhere is this more true than in the black on black matchup, where traditional card valuations can be thrown out the window. Gluttonous Zombie? A mere 3/3 for 4B. Severed Legion? A Grey Ogre. Skinthinner? The chances of it killing something crucial are much lower, ditto for Cruel Revival. Dragon Shadow is junk, Infernal Caretaker could backfire. 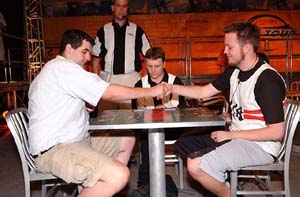 Other cards go the other direction and get better- Anurid Murkdiver is an all-star, Shepherd of Rot can end games in an instant, Gempalm Polluter can cycle for surprisingly high amounts of damage, and Soulless One is totally insane. It's like a bizarro-world of Magic, where you wear a hats on your feet, and hamburgers eat people.

William Jensen and Jake Smith sat down under the lights on Sunday to play one such matchup, with the biggest stakes imaginable on the line- a Pro Tour Championship.

Jake opened the game on the play, but it was Huey who had the first action of the round with a turn 1 Festering Goblin. It seemed destined to trade with Smith's turn two play, Goblin Turncoat, and that is exactly what occurred. Jake busted out Death's-Head Buzzard on turn three, and passed it back. Jensen's retort was Severed Legion, barely better than a Grey Ogre in this black on black contest.

Jake Smith scored first blood on his fourth turn, sending with the Buzzard and cycling a Gempalm Polluter to find action and "ding" Jensen for an additional point. Jensen made a morph (Imperial Hellkite) and attacked back for two, a move that Smith countered with a morph and a two point attack of his own.

It was on Huey's fifth turn that the game really started to get interesting. The big Brockafellar tapped all of his land and placed Corpse Harvester on the table, a card that would all but guarentee him the advantage in a war of attrition. Smith seemed to have no immediate answer, and used his turn to swing with the Buzzard once again before casting a Gempalm Polluter and passing it back. Huey didn't waste much time in attacking with his Severed Legion and morph.

Smith blocked Legion with Polluter and the Corpse Harvester went to work as soon as damage was on the stack, fetching Jensen a crucial Swamp as well as a Nantuko Husk. Spark Spray was cast to kill Death's-Head Buzzard, with the –1/-1 triggered effect also serving to finish off the Polluter, which had two damage on it. The swamp and Husk came down after combat.

Suddenly, Smith's board looked awful- a lonely morph against Corpse Harvester, Nantuko Husk, and an enemy morph. The Original Slacker patched things up with Chartooth Cougar and passed the turn. Still, he was in big trouble without an answer to Jensen's Corpse Harvester, which would eventually win Huey the game given enough time. In fact, it was possible that the damage had already been done- the one activation so far had had devastating results. 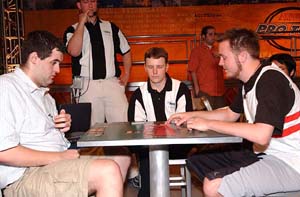 Smith's woes were amplified tenfold when Jensen played Soulless One, a card so ridiculous in the black on black matchup that it nearly defies description. For only four mana, it dropped onto the board at a lithe 7/7, leaving Jensen with deadly attackers, solid defenders, and the mana to use his Corpse Harvester. He passed the turn, and Smith tapped out for Macetail Hystrodon on his own turn in an attempt to stem the tide.

Huey, who had been holding two copies of Clutch of Undeath virtually the entire game, decided to use one to beef up his Soulless One, powering the Zombie Avatar up to 10/10. It was only a second before it was crashing through the red zone. There were no good options for poor Jake Smith, who could chump block and end up in an impossible board position, triple block and end up with nothing on the table (and possibly not even kill the Soulless One, if Jensen's morph was a Zombie) or take ten damage and fall to two.

He took the third option, wincing as the ten points of beats were reflected on the judge's scorepad. Smith's draw yielded a non-answer, and he passed it back, only to have Jensen lay a mountain and flip up the Imperial Hellkite that had been sitting around on the table all game. To the air!

Smith's morph was a non-flier, and he had to scoop.

Both players were happy with their opening hands in Game 2, but the game took an unfortunate turn early on when Jake Smith made a crucial mistake on his own turn three. With a 1/1 Carrion Feeder in play staring down Jensen's Skirk Drill Sergeant, the Original Slacker B-Seat tapped three mana and played Death's Head Buzzard. So far, so good- but Smith dropped the ball when he sacrificed the Bird to his Feeder, unaware that the graveyard triggered ability would resolve first and send the 1/1 Zombie to the boneyard.

When the dust cleared (following a brief explanation from the table judge about the timing involved), Smith's board was clear- he had essentially two for one'd himself while wasting the entirety of his third turn. Jensen was set to pounce on the mistake, playing out a morph and passing it back. Smith made a morph of his own, but when Jensen attacked on the subsequent turn, he declined to block. Huey tapped two and revealed Haunted Cadaver, stripping the last three cards from Jake's hand, and the rout was on.

Smith tried valiantly to get back in the game with his remaining morph, but he just didn't have the tools left after so much early game card disadvantage, and moreover, Jensen wasn't about to give him the time. The hits kept coming from Huey's side of the table- Corpse Harvester, Festering Goblin, Shepherd of Rot, Reaping the Graves. Smith had Smother for the Shepherd, but his defenses were overtaxed- the Corpse Harvester was serving for three every turn, knocking him to eight in short order.

Eventually, Jake mustered a Fallen Cleric that might finally trade with the Harvester. Jensen could only laugh to himself when topdecked Imperial Hellkite on his own turn. An alpha strike brought Smith even lower, and the big dragon hit play after combat, putting him in an impossible position. With no answer forthcoming from the top of his deck, he had no choice but to extend the hand.