The magical life has not been overly kind to Brock Parker lately. He did quite well back in the day, and was even qualified for the Masters in 2001 due to solid finishes on both the Pro Tour and the GP circuit. After that he pretty much fell off the radar, even being the topic for such team names as the Brock Bottom. His original teammates Jensen and Linde never really stopped playing with him in team events though, and now here they are in the finals. 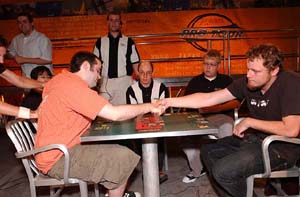 The Swede Lovre Crnobori has been playing for a few years with the Norwegian pros, doing a lot of money drafting and modoing. The Norwegians are known for their good success in limited formats, and Lovre started to learn fast. He played a few Gateways and a Pro Tour with different established Norwegians getting decent results. Regardless of that he found himself abandoned for this event. He then managed to hook up with fellow Swede Rickard Osterberg and Jake Smith, a Brit living in Norway. It is fair to say that the boys are doing quite well in this tournament. Of note is the fact that the team name under which these three foreigners won a qualifier in Oslo, Norway was Team Norway. Ah, those Europeans and their sarcasm.

Both players considered themselves to be a clear favorite in this matchup. Brock thought his blue-green deck was the stone-cold nuts, featuring a lot of fliers, two Savages and plenty of ways to make use of Wirewood Symbiote. When asked about problem cards in his opponent's deck, Brock said that there were hardly any. Lovre felt good about his match since he had Wave of Indifference and Decree of Savagery in his green-blue-red deck to break the stalemate. Lovre also had three Shoreline Rangers and some other fliers. Both guys said that they have more fliers, which was odd considering the fact that the situation is logically impossible.

Lovre won the flip and decided to go first. He dropped turn two Stonewood Invoker but it was outmatched by an Elvish Warrior. Morphs entered play on both sides. Lovre cycled Shoreline Ranger and flipped over his Mistform Seaswift to deliver some beats. Brock sent with a morph (Titanic Bulvox) and it traded with the Invoker. He then hard-cast his own Seaswift. Lovre traded the Swifts, put out a morph and skipped his fifth land drop. Brock hit with the Warrior and played Riptide Mangler along with his buddy Fierce Empath, netting a Treespring Lorian.

Lovre cycled Macetail Hystrodon during his turn and passed once again without a land. Brock hit with the Warrior and dropped Lorian. Crnobori finally got the fifth land, Mountain, but could only muster a measly Flamewave Invoker. Brock put Warrior, Mangler, and Lorian into the red zone. Two Invokers blocked the Lorian. This did not turn out well for our hero as the Lorian got Aggressively Mutated while the unblocked Mangler permanently became 11/3. It did not take too long for Lovre to concede. 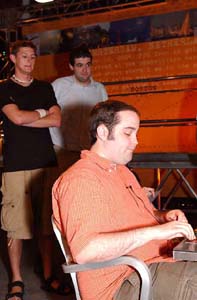 For everyone planning on playing these Big Men mirror matches, I do not suggest missing land drops.

Lovre played first and cycled the Ranger on turn two. He played a morph which was matched by a Savage. Lovre attacked and played his fourth land. Brock hit with the Savage and played his own morph. Lovre cycled Macetail at end of turn. Then he morphed up a Seaswift and served, putting out another morph. Brock swung with everyone, laid a fifth land and a morph with Willbender mana available. Crnobori did not bite the bluff and just Tracered the morph (Bulvox) during his turn to swing for five, and then played a Stonewood Invoker. Brock brought out Needleshot Gourna and decided not to attack with Savage or morph.

The Swede drew land number six and attacked with Invoker, Seaswift and Tracer. Brock only blocked with Gourna, and the Seaswift got bigger with a cycled Degree of Savagery. What an appropriate name for a card. This put Brock down to six, and he desperately needed Echo Tracer. During his turn Brock fetched Primoc Escapee with Empath, cycled it and conceded.

After this there was a little break while Linde and Osterberg played their second game. Rickard evened it to 1-1. Jake then lost his second game and the match. So it was now up to the Europeans to win two games in a row if they were to make it.

Lovre boarded out Macetail Hystrodon for Dispersal Shield since he was going second. Shield is optimal when countering a morph on turn two, and it is harder to finish the game with a Hystrodon when going second. Brock had the usual turn-three morph and Lovre played Savage. This basically meant that he would be taking in some hits while trying to stabilize with card advantage. Brock had another morph while Lovre did not have anything for his fourth turn. He could have cycled a Mauler hoping for a two-drop, but opted to save it for the Savage. Brock just kept swinging with morphs and played a third one. Ironically Lovre drew the Invoker on his next turn.

Crnobori drew a card with Mauler and shipped the turn. Brock Tracered the beast and attacked all-out, causing Lovre to trade Savage for the last played morph (Willbender). Brock played a yet another morph. Lovre replayed the Mauler and hoped for nothing evil on the opposing side. All morphs hit, and the one that Lovre blocked got Mutated into a 5/5. Brock had the option of dropping his opponent down to one life but instead went for the long-term investment plan. Lovre played a Spitting Gourna and Stonewood Invoker. Brock attacked with the two morphs and Tracer, and no kind of block was sufficient to stop the $30,000 Titanic Bulvox.

Sidenote: The last two games were won by the person without a Savage in play.