Lundquist is the 19-year-old upstate New York native who has been setting the Magic World alight. Third in the Rookie of the Year race, Lundquist now has a U.S. Nationals Top 8 to add to his exploding resume and is hoping to take home the title of U.S. National Champion. 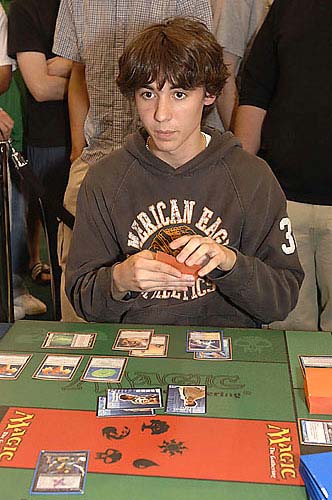 Lundquist's 'Tron marched him to the finals.

Standing in his way is Paul Cheon, a 21-year-old California student who is looking to make the title his own. Cheon's teammate Luis Scott-Vargas put away Ben Zoz in the third-fourth place match, and both Lundquist and Cheon admitted that they are officially excited by just how good (though relatively unknown) the national team is going to be.

Lundquist won the die roll and chose to play. Ben chose to keep his hand, but Cheon had to mulligan to six. The mulligan was just a convenient way for Cheon to avoid discarding on turn 2 after he played an Azorius Chancery. Lundquist cast the first spell of the match, using Compulsive Research to trade an Urza's Mine for three new cards. The action through turn 6 was hardly exciting, as both players went "draw, go" every time, adding nothing more than the occasional Signet to the board.

Wildfire from Lundquist met a Remand, but Spell Snare made sure it resolved, clearing Cheon's board of lands. Lundquist followed the 'Fire two turns later with Keiga. Cheon tried to Mortify the dragon, but Remand put the destructive spell back in his hand. Keiga met its demise a turn later to the same spell. Unfortunately for Cheon, he was way behind on mana, and Tidings from Lundquist made sure Cheon was way behind on cards as well. Another Keiga died to another Mortify, but Lundquist simply cast a third, protecting it from Wrath of God a turn later via another Remand.

Cheon cast Yosei, but that just gave Lundquist a target to Confiscate. Wrath of God cleared the board, and Lundquist cast his fourth Keiga of the game. Keiga got in there during Cheon's Yosei turn, but Cheon Mortified it during Lundquist's next upkeep, forcing Lundquist to Repeal it and recast it the same turn. He also had enough mana to cast Tidings the same turn and then still had enough mana left over to double Mana Leak Cheon's next plays. It turns out Lundquist only needed one - a Leak on Zombify targeting Yosei - and game 1 was in the books.

Cheon took the gamble in game 2, keeping the one land + Signet hand after a mulligan. He missed his second land drop, but drew an Azorius Chancery on turn 3. Of course, that's still not the start you are looking for against a Wildfire deck. Cheon discarded a couple of times, had a Compulsive ResearchRemanded, and then resolved Compulsive Research only to fail to find any more land. Lundquist cast Meloku and then rode the Clouded Mirror plus a finishing Demonfire (and Cheon's mana screw) straight to a two-game lead. 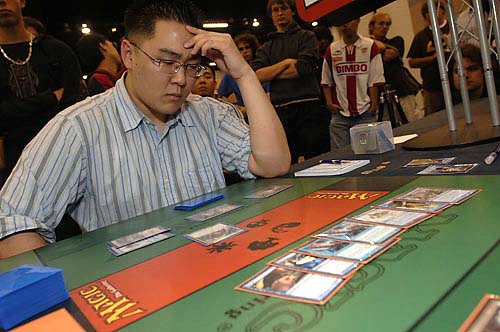 Cheon had some thinking to do if he wanted to dig out of a two-game hole.

Meanwhile, Cheon was changing things up slightly each game but decided that the basic strategy revolved around bringing in all of his Castigates, Persecutes, and Cranial Extractions. In exchange, he took out 2 Signets, 2 Wraths, all 3 Court Hussars, and a fluctuating card in each game, the default being Kokusho.

Both players kept seven for game 3, with Cheon casting an early Compulsive Research and Azorius Signet to a pair of Signets from Lundquist. Without the excitement of mana screw, the match was back to draw, go. Lundquist broke the silence with the thunderous crack of Meloku, hitting his full Tron on turn four. Cheon resolved Castigate, seeing Keiga and a pair of lands left in Lundquist's hand. He then Mortified Meloku. Lundquist decided at this point to go all-in, picking up all four of his lands in exchange for four illusion tokens.

In the face of Lundquist's air force, Cheon went large, hardcasting Ink-Eyes, Servant of Oni. Lundquist's pair of Signets let the teenager Annex Cheon's Azorius Chancery, once again giving him a hefty mana advantage, but a hand full of lands was hardly cause for concern on Cheon's part. Zombify from Cheon reanimated Angel of Despair, killing Lundquist's blocker, which let Ink-Eyes attack unmolested, delivering Meloku into Cheon's waiting arms. Lundquist had enough mana to Demonfire Cheon out, but Cranial Extraction ended any hope of a lucky draw from Lundquist, and it was on to game 4.

Dueling Compulsive Researches opened the card advantage war for Game 4. Lundquist proved he was lucky as well as good hitting the natural Tron on turn four and casting Keiga, the Tide Star, but Cheon's play was far more savage, Persecuting Lundquist for six blue cards. Since Ben's hand held permission, it's possible he was too aggressive there and paid a heavy price.

Tidings off the top gave Lundquist four new cards, but he was now squaring off against Meloku and minions, courtesy of Zombify. Annex stole Cheon's Orzhov Basilica, but Meloku turned into Ink-Eyes, putting Keiga into play on Cheon's side. There was then a discussion about a life total discrepancy on the player's score pads. Cheon had himself and 14 and Lundquist at 10, while Lundquist had himself at 10 and Cheon at 15.

This mattered because Lundquist now had 15 mana on the board and a Demonfire in hand, but was facing 10 points of damage next turn. It was eventually determined that the correct totals were 15 for Cheon and 9 for Lundquist, because Ben missed a point of damage for himself from Shivan Reef, while Cheon saw the pain, but marked it off his own total accidentally. That meant that Lundquist's Demonfire was pointed at Ink-Eyes instead, and Ben died a turn later, evening the match at two games apiece.

Lundquist missed his third land drop in Game 5 by a turn, and then had to discard Tidings two turns later when he missed a fourth land as well. A Signet from Cheon let Lundquist cycle a Remand, but it also left him open to Castigate, which forced Lundquist to reveal a hand of 2 Annex, Spell Snare, Tidings, Hinder, Confiscate, and a fresh Minamo, School at Water's Edge. Cheon chose Hinder and then braced for impact.

Cheon already had a Minamo in play on his side of the board, so Lundquist's Minamo was essentially a blank, preventing Lundquist from playing his Annexes. Fate was clearly taunting him. The lack of a second usable blue mana source let Cheon cast Cranial Extraction to remove the two Annexes in Ben's hand, giving Lundquist a brutal body blow and perhaps signaling the climax of an improbable comeback. 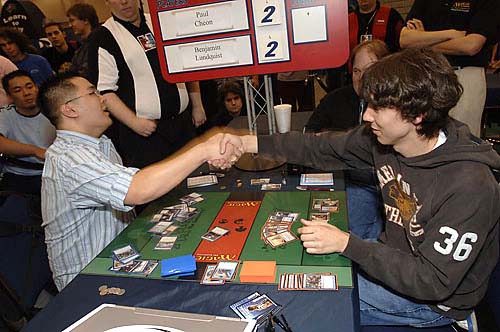 Lundquist was hardly done, hitting the full Tron a turn later and then Confiscating Cheon's Yosei. Cheon brushed his shoulders off, smacking back with Angel of Despair on the Confiscate, returning Yosei to his control. Lundquist's turn saw him draw seven cards, but card-drawing meant no action spells from Lundquist, and he was reduced to three on Cheon's next attack, after which the Los Angeles player laid a Miren, the Moaning Well, sacrificed Yosei to it in order to make sure Lundquist would not get an action-packed untap, and earned himself the title of Champion for at least a year.

In spite of falling behind 2-0 to a very solid Ben Lundquist, Paul Cheon is your United States 2006 National Champ!

After the match, I grabbed the celebrating Cheon and Luis Scott-Vargas to find out how the teammates felt about finishing first and third at U.S. Nats.

So… how does it feel?
Luis Scott-Vargas (LSV): Awesome. This weekend went far better than we ever expected. In fact, I tried to cancel my flight before this event, but it was too late. I'm pretty happy with that fate now. 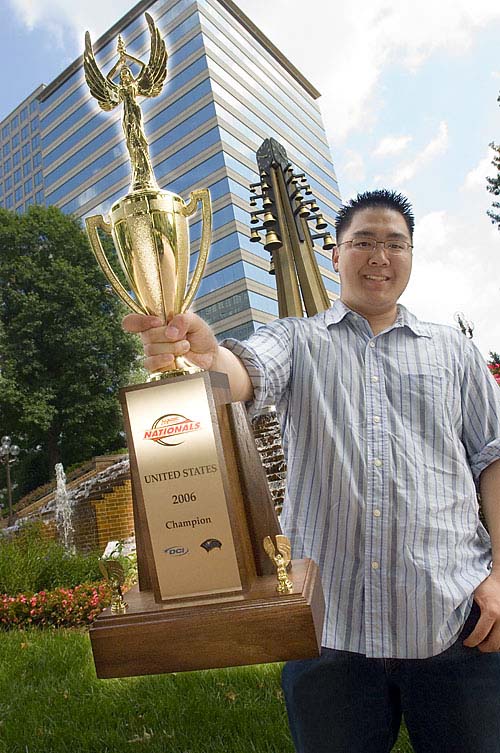 What kind of preparation did you two do for this event?
LSV: We did a lot of prep for the Limited portion, drafting quite a bit. I had probably done 15 Coldsnap drafts before this event, and Paul had 2 plus the benefit of what I learned. For Standard, Paul practiced for 2 weeks with black-white aggro, and even though that's not the deck he played, we learned a lot. I mostly played a month worth of Extended on Magic Online before the event instead of Standard. No lies.

How did you end up running Solar Flare?
LSV: I showed up here and had Tron and Solar Flare fully built, but Tim He gave us a push towards the white-blue-black deck. Paul eventually decided to switch to that deck as well because he kept losing to it. We also felt like this was going to be a heavy control field, so that's why we added the Castigates into the sideboard before the tournament.

So Paul, are you qualified for Kobe?
PC: No, but I have made two PTQ Top 8s thus far, and after my Limited run here this weekend, there's a chance I could get in on rating.

Yeah, you'll want to check that before you saddle up for more PTQs. How are you going to spend your prize money?
PC: I think I'm going to buy a new computer - my current one can only run one copy of Magic Online at a time, so there's definitely a need for an upgrade.

Good luck in Paris guys, and congrats on earning your U.S. National Team slot. At least testing for Team Rochester should be pretty easy for you two. 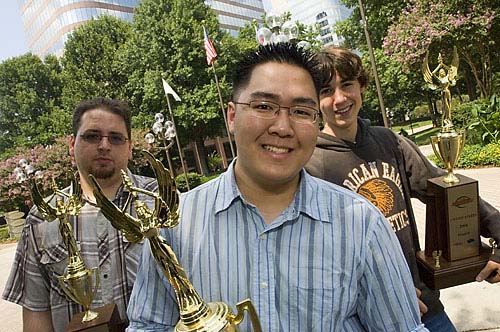