Finals: A Champion Levels Up

Paulo Vitor Damo da Rosa of Brazil joined an elite class of Magic players at Pro Tour–San Juan by making his sixth Top 8. When you factor into consideration the fact that he has played a relatively lean 23 Pro Tours, he becomes one of the players to have accomplished that feat the fastest. Unfortunately for him, thus far he had never managed to close on an actual title.

Guillaume won the die roll and had a powerful start with a first-turn Training Grounds. He followed that up with See Beyond while his opponent had nothing over the first two turns. A second See Beyond for Guillaume on the third turn found him a Skywatcher Adept, which he cast. Paulo finally got onto the battlefield with an Arrogant Bloodlord. 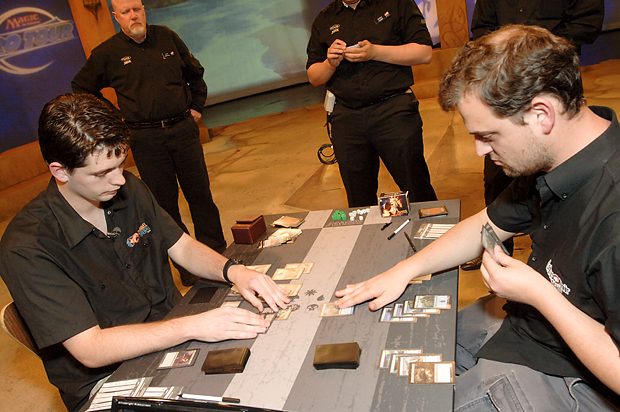 Paulo Vitor Damo da Rosa and Guillaume Matignon: one of these men will walk away a champion. (Drake not included.)

Venerated Teacher for Matignon bumped the Adept up to level 2, and thanks to Training Grounds he was able to make it level 3, attacking for 4. Damo da Rosa fired back with his own 4-point swing via Bloodlord, then jumped a turn ahead in mana by casting Ondu Giant. The 2/4 was killed in combat almost immediately, however, as it stepped up to block Venerated Teacher and was tag teamed with Induce Despair. Postcombat Matignon cast Null Champion.

The Champion died to a Last Kiss and Paulo found himself doing a good job of keeping the race interesting. The removal spell made it 14-12 in his favor, with his 4/4 Bloodlord doing a handy job of providing a beefy attacker. The Brazilian fell to 8 on his opponent's next attack, but a Bloodthrone Vampire helped increase the speed of his clock. Paulo cast Essence Feed on his turn to put Guillaume to 9, then attacked with his team. Matignon had no blocks but did have a board full of mana representing any number of tricks. Paulo didn't buy it, however, sacrificing enough Spawn to make the attack between Bloodthrone Vampire and Arrogant Bloodlord lethal, and Matignon scooped up his cards. It was an improbable win out of nowhere for Paulo, and the entire game had finished in five minutes.

The two players opened their hands for the second game, but Guillaume Matignon quickly sent his back on a mulligan. Paulo agonized over his, trying to determine if he should keep before finally deciding to ship after Guillaume presented his deck for reshuffling. Both players also had to send their hands of six back, but were willing to get things underway on five apiece. 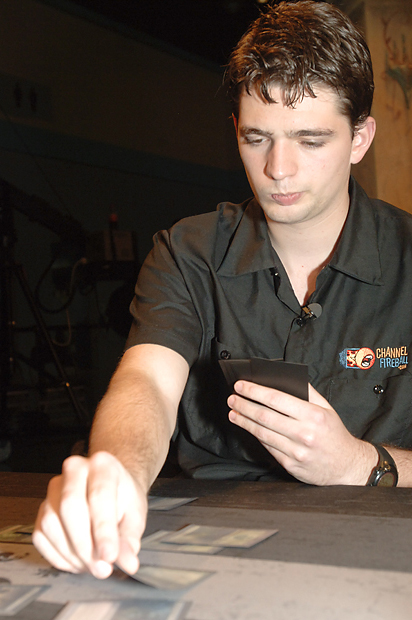 Champion's Drake opened things for Guillaume, and Paulo answered with Bloodthrone Vampire though he soon found himself stuck on two lands. Matignon didn't have that problem, casting Bala Ged Scorpion to take out the Vampire then Zof Shade to provide a beefy attacker. Damo da Rosa struggled to find some help, casting Null Champion and a second Bloodthrone Vampire but his mana issues meant he was very far behind.

Pawn of Ulamog helped with Paulo's troubles, allowing him to start chumping for Spawn which could serve as proto-lands if he was truly desperate. A Null Champion for Guillaume Matignon ticked up to level 3, super-charging his Champion's Drake which began putting a heavy hurt on Paulo's life, soon dropping him to 2. That meant Damo da Rosa had just one turn left to find an answer to either the Champion or the Drake, but when he couldn't, the players were on to the third game with the match tied.

Inquisition of Kozilek was the first spell of the third game, and it hit the stack for Paulo Vitor. He opted to force his opponent to bin Narcolepsy, but Guillaume had Champion's Drake to start attacking. He also cast a Venerated Teacher on the third turn, but with no levelers the Teacher was simply a 2/2. On the Brazilian side of the table, the third turn passed with no spells being cast.

Guillaume started digging for more action by casting See Beyond but when he tried attacking with his Drake and Teacher, Vendetta took care of the flyer. Paulo spent his fourth turn casting a second Bloodthrone Vampire which was promptly killed by a Bala Ged Scorpion from Matignon, then cast and leveled a Null Champion a turn later.

The game became a race, with Paulo leveling up his Null Champion and attacking with that and Bloodthrone Vampire while Guillaume worked on getting in with his Scorpion and Venerated Teacher. Neither cast additional creatures, and after a good run Guillaume was forced to begin chumping the Champion with the game tied at 6-all. First to bat was his Scorpion, which took one for the team, then he cast a Guul Draz Assassin and readied that for blocking. Instead, Paulo cast Last Kiss to kill the creature with enough left over in attacking creatures to finish Matignon off and regain his lead in the match.

Things did not start off well for Paulo Vitor Damo da Rosa in the fourth game of the match as his opponent cast a first-turn Guul Draz Assassin, then leveled it up with Venerated Teacher. Once the leveler was a 4/4 Paulo would have very few ways to remove it. Just in the nick of time, however, he had Last Kiss to take the Assassin out, and the crowd cheered.

A turn later, Guillaume Matignon cast Cadaver Imp to regrow his Assassin, then re-cast the leveler. The crowd roared again at the powerful back and forth, and Paulo tried to build an offense with Wildheart Invoker and Dread Drone. The Guul Draz Assassin, however, began working his creatures over as it moved to level 4. 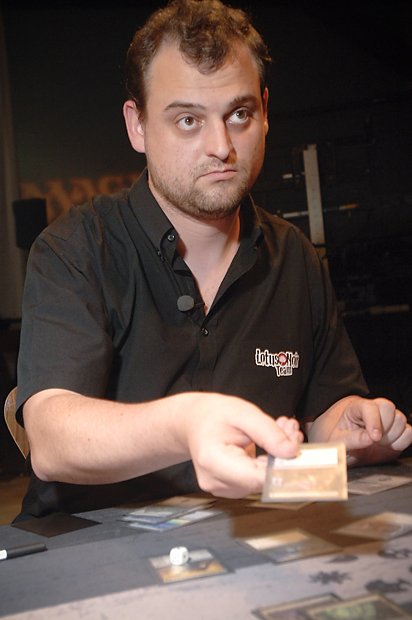 The back-and-forth continued as Paulo Vitor drew a Nirkana Revenant and was able to cast it with a Swamp up to pump. He was being pecked by Cadaver Imp, but his Revenant would provide a threat the Assassin would have a tough time killing and allow him to apply a little beatdown of his own. An attack for 6 thanks to some pumps on the Revenant put the score 14-10 in favor of Brazil.

Things were looking up for Paulo, but almost as soon as the thought was had Guillaume stole a trick from his opponent's playbook: an aggressive win from seemingly nowhere. With Paulo mostly tapped out save for a single Swamp, Matignon used his Assassin to blow up a Spawn token at the end of Paulo's turn. That left him with no blockers, so a Training Grounds from Guillaume meant he could pump his Zof Shade for a significant savings in mana and attack for more than lethal. When he did exactly that, Paulo picked up his cards.

The fifth game of the match started in similar fashion to the duels before it, with both players taking a mulligan. Paulo Vitor Damo da Rosa had the first creature of the game in Bloodthrone Vampire followed by a second copy a turn later while Guillaume Matignon had nothing over the first four turns save for a Training Grounds. At five mana, the French player finally cast a creature in Frostwind Invoker. 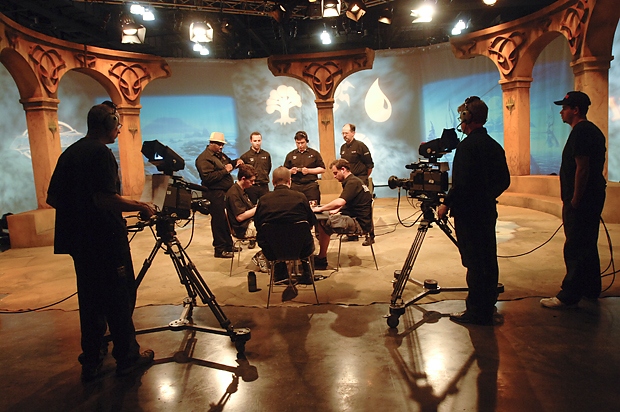 It all comes down to this.

Jaddi Lifestrider hit for Damo da Rosa, and he opted to tap his entire team to gain 6 life. He had to eat an attack for 3 from the Invoker a turn later after which Guillaume cast a Venerated Teacher to increase his board presence. Nirkana Revenant made another appearance for Paulo which allowed him to begin applying a serious beatdown on Guillaume. The mana boost from the 4/4 also allowed him to cast a Skeletal Wurm, and the Brazilian was on the verge of getting his first Pro Tour crown.

Guillaume battled back by blocking with Venerated Teacher, Gravedigging it with Cadaver Imp and re-casting it, but Paulo continued pressing in. A turn later when Guillaume found himself without enough blockers to stay alive, he graciously extended his hand in defeat. 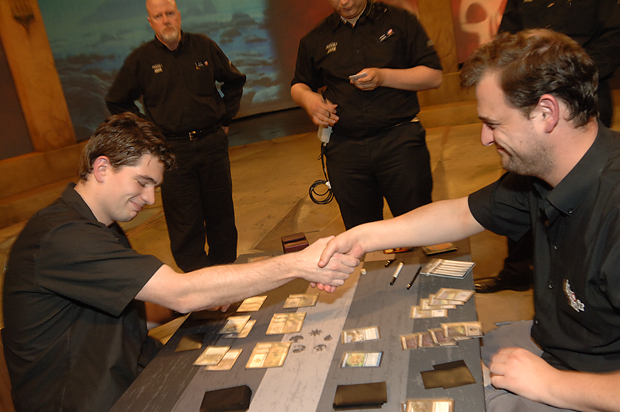 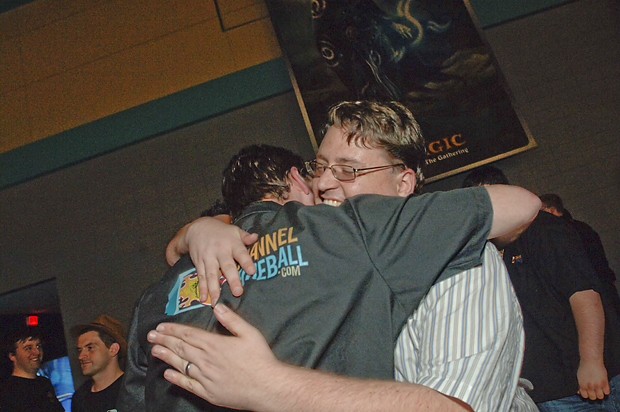 Paulo gets a congratulatory hug from ChannelFireballteammate Luis Scott-Vargas, whom he joins as a Pro Tour Champion. 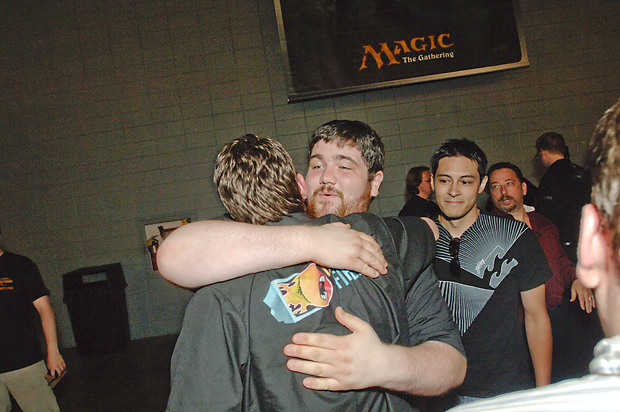 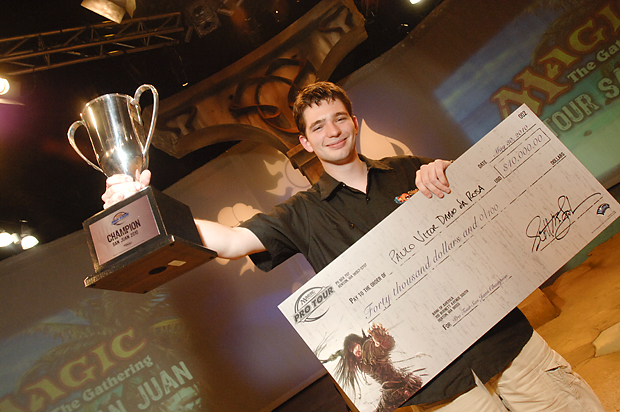