Vitor, Brazil's rising star and frequent online columnist, faced Top 8 veteran Tomaharu Saito in one third of the Pro Tour-Charleston finals. Vitor was playing a Dark Confidant-based Orzhov deck with a curve of powerful creatures going all the way up to Skeletal Vampire. Saito was armed with a black-red-white deck that also features Bob, but has all the formats best burn cards. 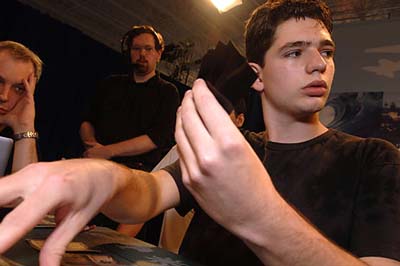 Paulo Vitor cast an eye to a friendly table during the finals.

Turn-two Dark Confidants from both players in Game 1 set the pace for the match right away. The game swung dramatically in Vitor's favor when his Orzhov Pontiff took down Saito's Bob and Lyzolda, the Blood Witch. Saito started taking hits from Vitor's Confidant and Teysa, and was getting frustrated at his draw steps.

The game ended a few turns later, and Saito threw his had of six lands down on the table in disgust.

Saito was already down to 13 life by the third turn of Game 2, thanks to playing two dual lands untapped and getting dealt a Lyzolda by his Dark Confidant. An attack from said Confidant and a land play from Vitor had him at 16, and that's when the burn started.

You know something's wrong when your opponent Chars you when you have 16 life.

In order, the plays for Saito were Char, Lightning Helix, Lightning Helix, Seal of Fire, Demonfire. Game over. Vitor had played out a Belfry Spirit and even given the team +1/+1 for a turn with Orzhov Pontiff, but it was all for naught as the burn was all that mattered.

With the A and B seat matches already determined, everyone crowded around for Game 3. These two had been held up by the coverage crew until the other matches finished, and it was now evident that the entire Pro Tour was going to come down to this third game.

Vitor put out Plagued Rusalka on his first turn. Saito's play on turn two was Fall, and before selecting the cards to be discarded he performed the famous "Saito Slap," smacking himself on both cheeks with the palms of his hands to keep himself mentally alert. Vitor discarded a Mortify and a Condemn.

Vitor's turn-three Teysa was Helixed, and then Saito sat up straight and started pushing the pace of the game significantly. "Go!" he implored, perhaps getting excited, perhaps trying to prey on Vitor's nerves.

Vitor had no play save another attack from the Rusalka. Then it happened. "Char," said Saito, taking Vitor from 20 to 16. Char the dome at 20 life. Oh dear.

On Vitor's next end step, Saito Helixed him, making the life totals 17-13 in Saito's favor. Giant Solifuge came down emphatically on Saito's turn, taking Vitor to 9. Vitor answered with a Pontiff to kill the 4/1.

Saito slapped himself again before dropping another Solifuge and sending it into the Red Zone, assuming it would be blocked by the Pontiff and trample for 3. But Vitor wanted to preserve his life points, and sacrificed the Pontiff to the Rusalka (haunting the Rusalka in the process) to give the Rusalka -1/-1. Because the haunt triggered happened before the Rusalka's effect resolved, the Pontiff got to haunt the Rusalka before it died, and then give the Solifuge -1/-1. 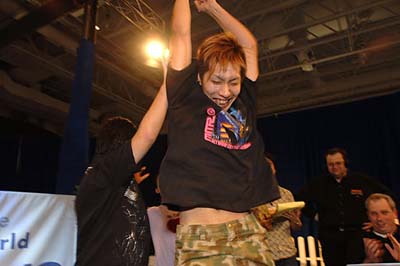 "Ahhh," realized Saito. He had done no damage. Vitor then played a Faith's Fetters on a Signet just for the four life, and suddenly was back up to 13.

No matter. Saito played a Seal of Fire and Lyzolda, and sacrificed the legend for 2 damage and a card when Vitor Darkblasted it. Vitor was drawing no threats, and was now at 11 and staring at a Seal.

Lightning Helix made the score 19-8 in Saito's favor.

Then Char made it 17-4. Vitor still had no answers.

Demonfire put a capper on the event, sending the Brazilian team packing and making Kajiharu80 Pro Tour Champions. The weather is awfully hot outside here in Charleston, and Tomoharu Saito made it just as hot inside the venue. 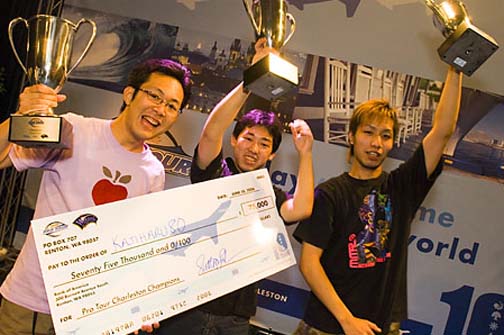