Four long days of competition in Rome, Italy, were all down to one final match. Could David Reitbauer of Austria defeat Portugal’s André Coimbra for the title? It was an unlikely tale considering work had forced Coimbra to miss much of the 2009 Magic year. He had nearly skipped Worlds, booking his ticket on Wednesday the day before competition began! It meant no difference to Reitbauer, who had been mowing the competition down all weekend long through three different formats. Already having seen the Sunday stage at previous World Championships as a member of the Austrian national team, he knew a thing or two about playing under the bright lights.

Reitbauer kicked the final match off with back-to-back-to-back Savage Lands, neither player casting a spell until the fourth turn when the Austrian plopped a Garruk Wildspeaker onto the battlefield. The planeswalker summoned a 3/3 Beast to fight, but Coimbra dispatched it with an end-of-turn Lightning Bolt. On his own turn the Portuguese pro cast Bloodbraid Elf, picking up a free Woolly Thoctar in the process, and with the path cleared thanks to his Bolt he bashed into Garruk and sent him packing.

David Reitbauer’s Jund deck went tit for tat with André’s Elf, as the Austrian cast one of his own netting a free Putrid Leech; two could play at the free spell 3/2 game! André used five mana for a Baneslayer Angel, but the 5/5 was quickly toasted by Terminate from Reitbauer. In fact, David had managed to cast the removal spell by first dropping a second Garruk, then untapping two of his Savage Lands. David Reitbauer Maelstrom Pulses away a pair of Wild Nacatls Rather than let the game stalemate, André Coimbra pressed into the second Garruk, attacking it with both his Woolly Thoctar and Bloodbraid Elf. David blocked the Thoctar with his Putrid Leech and traded Bloodbraid for Bloodbraid, but when he tried to pump his Leech, André used Lightning Bolt to kill the 2/2 in response. Postcombat, Coimbra dropped Ranger of Eos to fetch up Wild Nacatl and Scute Mob, which he cast. The situation was a little bleak for David Reitbauer, and he admitted as much, shaking his head disapprovingly after drawing.

He cast a second Bloodbraid Elf, flipping up a Blightning he sent at André’s head, then used Garruk Wildspeaker to untap two lands and cast Burst Lightning on the Scute Mob. Coimbra simply attacked, sending the team straight at David, and Reitbauer blocked Ranger of Eos with his Bloodbraid Elf, taking 5 and falling to 12. André then cast a second Ranger of Eos, fetching up two more Wild Nacatls, and cast two of them, pumping them to 4/4 with an Oran-Rief, the Vastwood.

Maelstrom Pulse served as a worthy solution to the Nacatls for the Jund player, but Reitbauer couldn’t help but exhale disapprovingly as André immediately drew Bloodbraid Elf. The cascade revealed a useless Path to Exile, but his ensuing attack dropped David to 5. The Austrian then had Master of the Wild Hunt, but André had yet another rip in the form of a third Ranger of Eos to find Wild Nacatl and Noble Hierarch, making them 4/4 and 1/2 respectively with his Oran-Rief.

A second Maelstrom Pulse took care of the multiple Rangers, but André ripped yet again with Baneslayer Angel. “You’re kidding me!” exclaimed a shocked David Reitbauer. He went to the top of his deck on just 1 life to see if he could find a solution, but with none there, the players were on to the second game.

Andréw Coimbra had had some fortunate draws in the first game, but he looked to have used up some of his fortune as he mulliganed not once but twice for the second game. Of course, he got a little help. as he was joined on the first mulligan by his opponent David, and on the draw as well. The two got underway, and Reitbauer tried to get an early offense going with Sprouting Thrinax. Coimbra was ready with Celestial Purge, exiling the 3/3 and saving André the trouble of cleaning up any Saprolings. 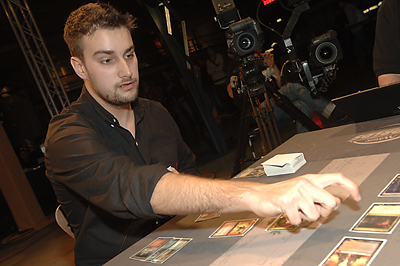 André Coimbra points the way. It was then André’s turn to get a creature going as he cast Bloodbraid Elf, cascading into Noble Hierarch. Reitbauer untapped and used a cascade spell of his own to wipe the board clean; Bituminous Blast flipped Lightning Bolt, and the two spells were enough to take out both of Coimbra’s creatures. André simply reloaded with Baneslayer Angel, off to a fine start for a double mulligan.

Terminate dealt with the Angel, and David also had a Garruk Wildspeaker in the same turn. The planeswalker gave him a 3/3 Beast, and he passed back to his opponent with significant tempo. André tried to steal some of it by casting a second Bloodbraid Elf revealing Great Sable Stag. He then used Lightning Bolt to wipe out his opponent’s Beast, and bashed the Elf into Garruk, knocking out the planeswalker. A fine start for a five-card draw indeed!

Broodmate Dragon made its first appearance in the match by entering the battlefield on behalf of David Reitbauer, but the play wasn’t wholly impressive; Coimbra’s team of Bloodbraid Elf and Great Sable Stag all had four power thanks to an Oran-Rief, the Vastwood meaning David’s single Dragon would essentially trade for Coimbra’s single Bloodbraid Elf. André obliged sending both his creatures sideways, and David pushed his Dragon token in front of the Stag, taking 4 from the Elf and holding on to the actual Broodmate Dragon. Post-combat André cast Goblin Ruinblaster to take out his opponent’s copy of Oran-Rief, the Vastwood.

David was in worse shape than he had been before, holding his Dragon back rather than attacking, and seemed disgusted when André drew a Celestial Purge off the top of his deck to take out the Broodmate Dragon proper. The following turn Coimbra managed a Great Sable Stag, which turned into a 4/4. With protection from black, it was enough to finish the deed slowly eating away at David’s life total while he failed to draw a form of removal that could kill the creature through its protective conditioning. 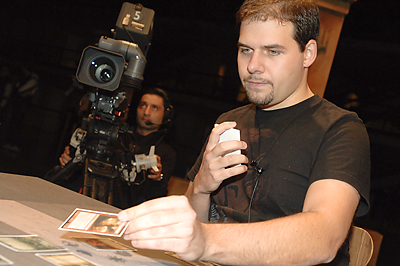 Reitbauer tries to dig himself out of a two-game hole. With his back against the wall, David Reitbauer quietly surveyed the cards in his hand for the third game of the match. He was so close to the end, yet it was all slipping away. After a few moments of consideration he decided to keep, then gazed on silently as André Coimbra mulliganed from seven to six.

Putrid Leech began the slow march back to redemption for David Reitbauer’s Jund deck, hitting the battlefield on turn three due to “enters the battlefield tapped” lands from David’s mana base. Coimbra managed to curve perfectly into Woolly Thoctar, but the 5/4 ate a Maelstrom Pulse, and the player from Portugal began taking hits from Putrid Leech.

Goblin Ruinblaster was the next creature on the battlefield, and it was a massive threat, if not in size then in impact. David Reitbauer had missed a land drop, and when the 2/1 entered the battlefield it destroyed his Savage Lands, leaving him with just two mana! He was in danger of being swept out of the Finals, his march ended prematurely.

Pressing his mana advantage, Coimbra cast Bloodbraid Elf flipping up Great Sable Stag. Reitbauer continued missing land drops, stuck on Dragonskull Summit and Swamp, and was forced to use two Lightning Bolts to kill the 3/2 Bloodbraid and 3/3 Stag. André had Celestial Purge to exile his opponent’s Putrid Leech, finally getting rid of the pesky 2/2, then cast a second Woolly Thoctar. David gave a macabre nod, seeming to accept he was not likely to be in the match for much longer.

The hits kept coming for André Coimbra, who found another Great Sable Stag. When he turned his entire team sideways a turn later, David nodded his head. His march to redemption would not happen this year. 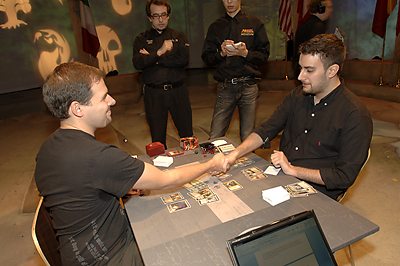 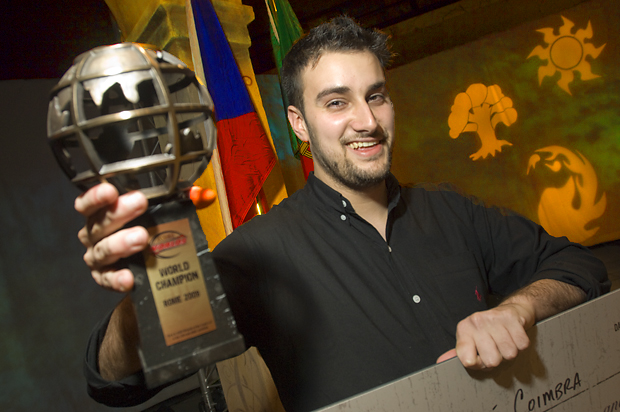