Pro Tour–Amsterdam was down to one final match, and it would be an All-American duel. From California, playing White Weenie, was Paul Rietzl in his second Pro Tour Top 8. Across the table from him was North Dakotan star Brad Nelson, who was in an astonishing sixth Top 8 of a major event in a row! Both are truly at the top of the Pro Tour game, and both were hoping to finally break through for a Pro Tour championship on Sunday.

Though Brad Nelson had earned the right to go first as a result of finishing higher in the Swiss standings than his opponent Paul, the bearded phenom was punished with a cruel double mulligan to start the first game. He opened on Treefolk Harbinger, one of the trademark cards of his deck on the weekend, then cast Tarmogoyf a turn later. 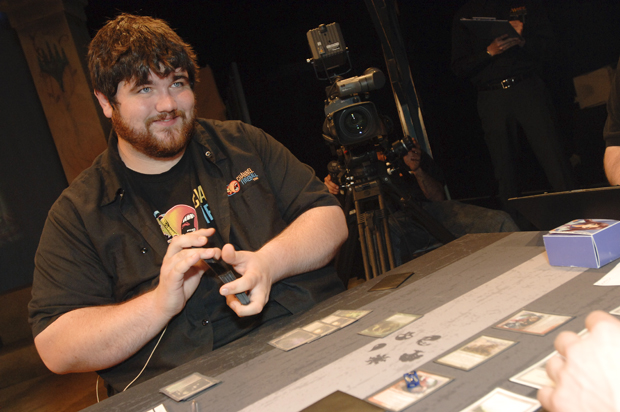 Brad Nelson brings the trees to the final match here in Amsterdam.

Paul Rietzl's White Weenie deck, engineered by none other than Gabriel Nassif and also played into the Top 8 by the legendary Kai Budde, wasted no time coming out of the gates as Paul cast a Figure of Destiny followed by Student of Warfare. Nelson cast a Duress, seeing a hand of double Mana Tithe, Figure of Destiny, Honor of the Pure, and a land; the enchantment went to the graveyard.

Figure of Destiny became a 2/2, and when Paul played his third land he was able threaten it becoming a 4/4. "Surprisingly complicated," the Californian White Weenie player said, trying to figure out the correct attack for his turn. He sent his Figure sideways and Brad said, "I'll make the decision easy for you," moving his Treefolk Harbinger to block. That led to a pump from Paul to level up the Figure to 4 power, killing the 0/3.

Stuck on two lands, Nelson's Doran deck struggled to keep up. He attacked with his Tarmogoyf, and prior to combat used Nameless Inversion to remove his opponent's Student of Warfare as a blocker. The tribal instant was a big pump for the graveyard, boosting the Tarmogoyf twice, and Brad managed to drop Paul to 9. Rietzl attacked back to make it 13-9 his opponent's favor, then cast Knight of the White Orchid and a second Figure of Destiny.

The Tarmogoyf cracked back into the red zone and Rietzl fell to 3, uninterested in chumping. He untapped and cast a pre-combat Knight of the White Orchid, fetching up a free Plains, then attacked Brad back for 6. Nelson was dead in another combat step, so he needed some help from his deck. Of course, the fact his Tarmogoyf was lethal for Paul meant that when Brad turned the green rare sideways Rietzl was forced to block, trading his second Knight of the White Orchid to Fog for a turn. After combat Nelson cast a Putrid Leech, paying for a single Mana Tithe, then passed despite being dead on board to his opponent's board position.

Rietzl drew and did some combat math, trying to figure out what his opponent's outs might be. "God, it has to be EXACTLY that card," he mumbled, trying to figure out the best course of action. He sent his team sideways, but rather than pump his second Figure of Destiny from 2/2 to 4/4 he opted to simply deal 4 damage total. That took Brad to 1, and Paul had to cast two creatures postcombat to make sure he could block the impending lethal Tarmogoyf attack backed by a possible Maelstrom Pulse.

Nelson peeled his top card back from his deck, revealed Reflecting Pool, and conceded, out of options for continuing.

"Man, it's not tough to beat an opponent with only five cards. I hope you never keep seven or you'll obliterate me!" Rietzl teased his opponent as they shuffled through their sideboards in preparation for the second game.

Brad Nelson just smiled and focused on the upcoming duel.

Starting with his most aggressive one-drop, Paul Rietzl cast Steppe Lynx on his first turn. On the play for the second game in a row, Brad Nelson had time to cast Tarmogoyf before absorbing a 4-point attack from the Lynx. His opponent spent the rest of his second turn casting Figure of Destiny after the attack, passing with a mana up with which he could pump his 1/1. 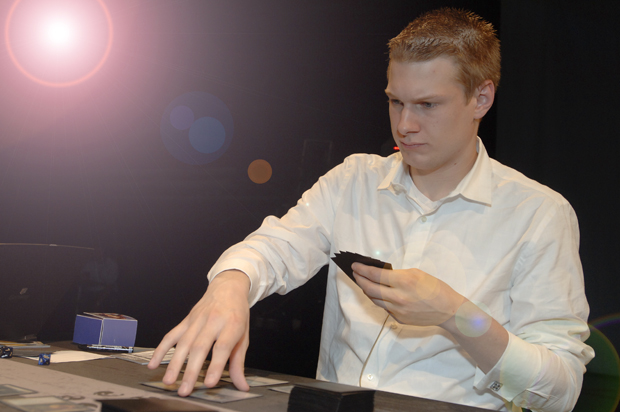 The legendary Kai Budde fell in the quarters in the selfsame match-up, but Paul Rietzl has his eye on a different outcome.

Maelstrom Pulse took out the Figure, while a Marsh Flats allowed Paul to get in with a second fully powered attack from his Steppe Lynx. He had a Spectral Procession postcombat to give him an army of 1/1 flyers, and Nelson fired back by continuing to attack with his Tarmogoyf. Putrid Leech and Treefolk Harbinger, tutoring up Murmuring Bosk, allowed Nelson to develop a stronger position on the battlefield, but he still needed some help against Paul's army; if he didn't have another Maelstrom Pulse and soon, he'd lose to the Spirits created by Spectral Procession.

A Student of Warfare was cast and leveled twice by Paul before he attacked his opponent to 7. Nelson cast a Doran, the Siege Tower, dinging himself to 5 with his own mana base. He turned his Tarmogoyf sideways, but when his opponent revealed a Path to Exile for the 0/5, Brad conceded.

"Good luck, Brad!" Rietzl cheerfully offered as he drew his opening hand for the third game.

"Thanks," Nelson replied before murmuring under his breath, "I think I'll need it. . ."

As if on cue, Brad was forced to take a mulligan for the third time in the match. His back was pressed as hard against the wall as it could be, and he needed to win three straight in order to emerge victorious as a champion. His six was good enough, though the Midwesterner took a few moments to consider it. Rietzl led off with Steppe Lynx, which drew a "tsk" from his opponent.

"You gotta have that Cat every time!" 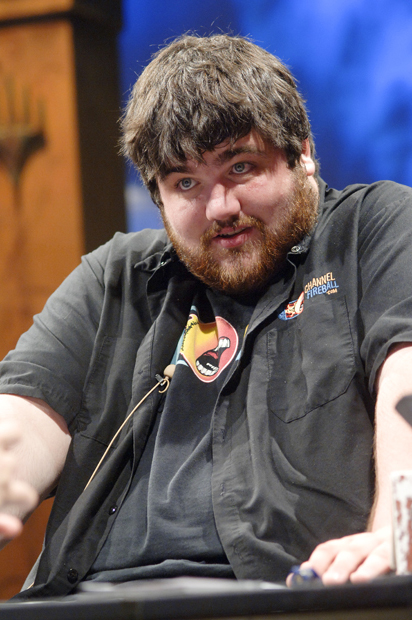 Putrid Leech answered back from Nelson, staring the diminutive 0/1 down from across the battlefield. Of course, a 0/1 is a lot less imposing than a 4/5, which is what the Lynx turned into on Rietzl's turn as he used a Marsh Flats to pump it. He also had Honor of the Pure, a called shot Brad announced to the table, successfully predicting the play from his opponent. The Doran player fired back with a Putrid Leech attack and cast a Loam Lion, passing the turn.

With his opponent stuck on two lands, Paul tried to capitalize with an attack. He sent his Steppe Lynx sideways but it was chumped by the Lion. A postcombat Spiritual Procession generated three Spirit tokens, each a 2/2 thanks to Honor of the Pure. Brad drew for his turn, found no third land, and passed sitting on just a Putrid Leech.

An Arid Mesa hopped to the battlefield for Paul, his third fetch land of the game. He cast Honor of the Pure number two, and Brad promptly extended his hand. 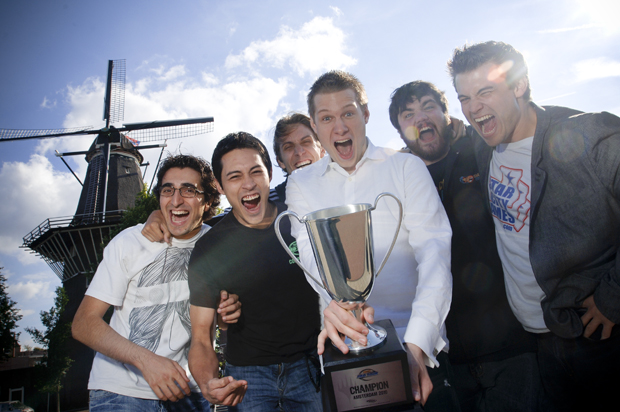