Finals: Cloak of a Champion

so, 18 rounds of play and 408 players later, it comes down to these two. Rising star Mark Herberholz of the United States, in his third Pro Tour Top 8 of his career, and comes into the finals also representing the beach house crew. His opponent is Craig Jones of the United Kingdom. Known more perhaps for his extensive event coverage of the European Grand Prix scene, Craig knows what he's doing on the other side of the table too (despite a couple high-profile meltdowns after perfect starts). 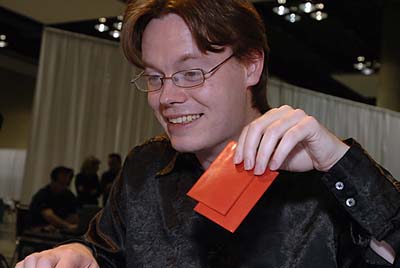 As we sit down for the finals, Craig was still flush from the stunning win he pulled off at the end of the semis against Olivier Ruel just minutes earlier. On the ropes and dead next turn, he played his fresh Char on Olivier, went to 1, and flipped his next draw face up onto the table, needing 3 points of burn immediately to make it to the finals. The card was Lightning Helix, which sent a roar through the room as the crowd (and Craig Jones) went completely berserk.

These players actually ran into each other in the Swiss rounds at the end of the tournament. Craig was already in, but Mark needed a win and asked if Craig would concede to put him into the Top 8. Craig takes the story from there: "I was possessed by the spirit of Kai. I didn't want other aggro decks in the finals, so told him I'm sorry, but that I wanted to play it out."

They played their first game and ended up with a draw on a Char, and suddenly Craig changed his mind. "I don't know why, but I just decided I didn't want it to go that way. I was in Mark's position once, at Philly, and my opponent didn't concede and I ended up not making it. I didn't want to do that to Mark. I'm not that kind of person."

Hearing that, Mark laughed. "I'm pretty happy he's not that kind of person!"

Craig laughed too, gesturing to the finals stage they now found themselves at. "It's karma."

Speaking of karma, that player that knocked Craig from the Top 8 at Philly after refusing to let him in? Turns out that was Olivier Ruel, who Craig just knocked out in the semis. Karma indeed!

On the draw, Mark threw back his opening hand of Frenzied Goblin, Moldervine Cloak, Mountain, Mountain, Dryad Sophisticate, Char, Scab-Clan Mauler, but found his six-card hand satisfactory. His Frenzied Goblin was the first creature into play, matched by Watchwolf from Craig. Each player missed a creature on their next turn. Mark went for Char on Craig's upkeep, but Bathe in Light, a techy little card that's been outstanding for him all weekend, shut that down. The wolf swung in, a second came to play, and it was Craig 15, Mark 14. (Since life totals matter so much more in an aggro match like this I'll just list the totals in that order each time.)

Mark thought his own turn through for a bit. Craig gave him a friendly taunt: "time for some kind of skittering insect?" Solifuge did come out for the attack, but the goblin had to stay back. Craig took it, putting the score at 11-14, then swung in with both his wolves. 11-8. Playing a tapped land with 4 mana up, he simply said go. Burning-Tree Shaman and Dryad Sophisticate threatened to clog up the ground, but the Englishman simply pointed a Helix at Mark, untapped, and Bathed his army in Light, giving them pro-green and a clear path to Mark's life total, sending it to Game 2 just like that.

This time it was Craig Jones sending his opener back, stuck with a bad mix of two colors of mana with the wrong color spells and some Kird Apes that would have been less than spectacular. Craig spent a long on his six-carder, ultimately deciding to pitch that one back too. "This might be a bit of a hard fight, with five cards." But that one had no land at all, and Craig had the unenviable position of pining for when he had five cards (ah, the days of prosperity!), as he drew up his meager new opener of just four cards.

John Becker, watching on from the side, couldn't help himself: "I can name that deck in three cards!"

This time he had a keeper, and not all that bad if you have to start with three cards.

Rusalka from Mark met Temple Garden and Isamaru. Dryad Sophisticate was next for Mark, but despite the one land, Craig had another decent beater, playing out a Lion. Next was Burning-Tree from the American, and the best Craig could do was yet another Lion off his poor single land mana base.

"No problem baby!" he cried out. "I can play with three cards!" 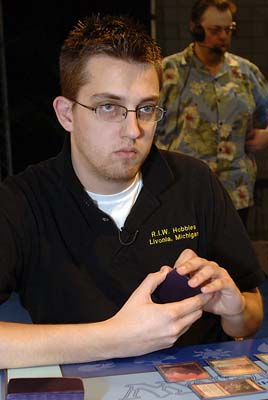 Facing this guy was going to be hard enough with seven cards!

Things were looking bad for Craig (you know, aside from the quadruple mulligan) but got much worse when the next beast out was Rumbling Slum, which caused Craig to make a choking sound, putting the life totals at 10-16. Out of choices, Craig sent in his team, the Rusalka traded with a lion and the Slum just skipped the battle. Sophisticate fell to a Helix but Mark swung in and showed Craig the Char that would put it away and that was that.

As soon as it was confirmed the game had gone in his favor, Mark whipped out some prop humor that you'll just have to download the video to appreciate.

Keeps on both sides this time, here's how it went on both sides, turn-by-turn, with Craig Jones on the left side:

Some long thoughts from Craig, then Jitte, equip Watchwolf, swing with everyone, Watchwolf dies to Slum. (16-2)

Mark laughed as the counters left the Jitte, finishing off his Slum. "You had to think that long to play a Jitte?" Burning Tree+Rusalka showed up to reinforce Mark's side, but Kird Ape and Watchwolf joined Craig's and it was too much. Overwhelmed and out of outs, Mark conceded and sent it to Game 4. With a smile, he asked Craig an important question: "So, did you slowplay me to get me back for the prop?" Craig (and the rest of us) just laughed.

And then it was Game 5, time for a little "best-of-one" action. With four games under their belt, so far the player going first had been the player chalking up the win, four times out of four. Coming into the finale it would be Craig on the play, and he was intensely aware of that fact during the shuffling.

"Come on, deck, just give me a good draw like that third game."

Mark had a comment for Craig's deck too: "Come on buddy, help me out."

At this point both players started talking to their decks at the same time in a way that got a little creepy, though Mark's suggestion of another triple mulligan was amusing.

Craig had to take a mulligan, and at least looked uncomfortable with his six, but decided to stick with it. Mark thought a bit as well, but went with his opening seven. Here's how the turns played out for the finisher:

Craig pulled up his next card, was still stuck on two land, and tried to come up with a plan as he continued to fall behind on tempo. He ended up having to just say go, playing nothing this turn. Unfortunately for him, Mark had a lot more than nothing for his side, playing a Giant Solifuge. Craig got his third land, playing a Burning-Tree, but then Craig dropped another Moldervine Cloak on his Kird Ape, sending it over.

"Isamaru takes one for the team!" Craig immediately declared, sending his dog to the 'yard. Dryad Sophisticate used up the rest of Mark's mana, putting it at 16-15. The life totals were still close, for now, but the board was tilting rapidly in Mark's favor.

It looked like Craig might have some hope next turn, when he found land number four and played an impressive-looking Hunted Wumpus, but Mark had a Rumbling Slum in hand to drop for free, putting Craig even further behind on tempo and drawing an enormous reaction from the crowd. Things got even better for Mark on his own turn, as Cloak No. 3 came down, this time on the Slum.

Everything but the Solifuge charged over, an avalanche of 18 damage. Craig figured out his best chance, chumped with a Lion on the Kird, and took the rest. Peeling off the last card gingerly, the scene from the end of his semifinals match was on everyone's mind as the crowd held its breath to see what would come.

When Craig didn't come leaping out of his chair with a triumphant yell, there was a still a hanging sense of expectation. But when Craig offered his hand to congratulate Mark Herberholz, you knew the topdeck had failed him. 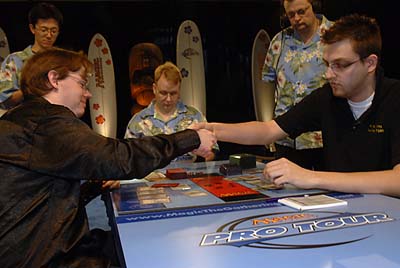 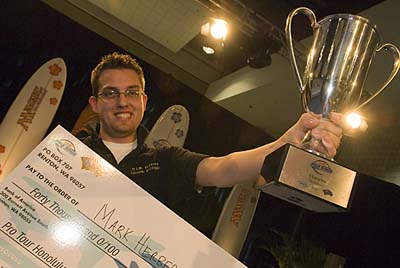 Coming into this event, it was draft bomb Debtors' Knell that got most of the talk, but after the final match it was another draft bomb - Moldervine Cloak - that took home the trophy. Congratulations Mark and all of the members from the Top 8! 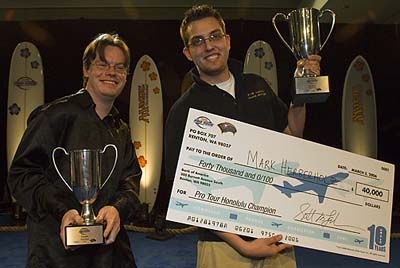