Finals: Comeback of the Ages

eid Duke's whole year has been leading up to this one match. After a heartbreaking 2-10 performance at last year's Players Championship, he was devastated. But he didn't let that feeling linger long. He turned it into a motivation: He would earn the Pro Points needed to return to the 2013 Magic World Championship and overwrite his 2012 performance. It came down to his last match of the season, but he did it. That was the easy part. Next came head-to-head combat against fifteen of the best players in the world. No problem. He started off 5-0 and paced the field, finishing first overall. Last round he dispatched reigning Player of the Year Josh Utter-Leyton. One player would be his last test.

That would be Shahar Shenhar. At 19-years old, his pro career is just hitting its stride, but already he has three Grand Prix titles to his name. Everyone who has worked with him agrees, it's only a matter of time before he becomes a fixture in Pro Tour Top 8s. In the , he dogged Duke's heels and cruised to the Top 4. He didn't get time to rest, though. As captain of Team Israel he had to play in the World Magic Cup. They struggled through Day One, barely making pool play with a 4-3 record. They escaped Stage 1, but the wheels came off in the Top 16. Their run ended with a disappointing 0-3 finish. Shenhar shrugged it off and turned his attention back to his individual Top 4, dispatching Hall of Famer Ben Stark in the semifinals. 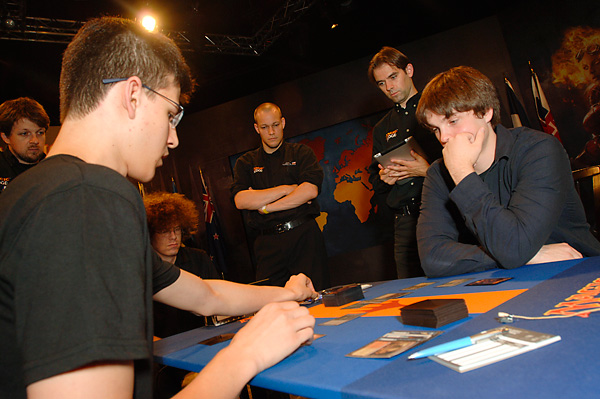 Two young and gifted Magic players, each having stellar weekends, battle it out in the final match of the weekend. The winner would be given the title of 2013 Magic World Champion.

Duke had chosen to play the Hexproof deck in modern, a lightning-fast deck that cheated big damage off enchantments. Shenhar had gone with Blue-White-Red Control, packed with some of the format's most powerful spells. They actually faced each other with these decks in Round 11, but in a best of three. Duke won 2-0. Testing bore this out. It wasn't so much that Duke was favored. It was only his legendary niceness that was keeping him from engraving his name on the trophy right now.

Duke started the first game with an inauspicious mulligan to six. He led out with a turn-one Gladecover Scout.

It wasn't as bad as could be. Duke's next turn was just a single Hyena Umbra and a second Scout. Shenhar stopped some of Duke's enchantments, but Rancor Resolved, and Shenhar was quickly down to 9. He couldn't fight the Scout. He would have to race.

Duke had taken damage from his lands, and a Snapcaster Mage attack and Ajani Vengeant's Lightning Helix brought Duke to just 10. Shenhar was down to 7. Duke's attack brought him to 1, giving him hope, but he was unable to stop the lethal attack on the following turn.

Duke's opening salvo was a Slippery Bogle enchanted with just Keen Sense and Rancor before attacking. Shenhar flashed in Snapcaster Mage and blocked, getting the creature off the table. This was to be something of a theme for the game, Shenhar answering threats, but Duke keeping up card parity. 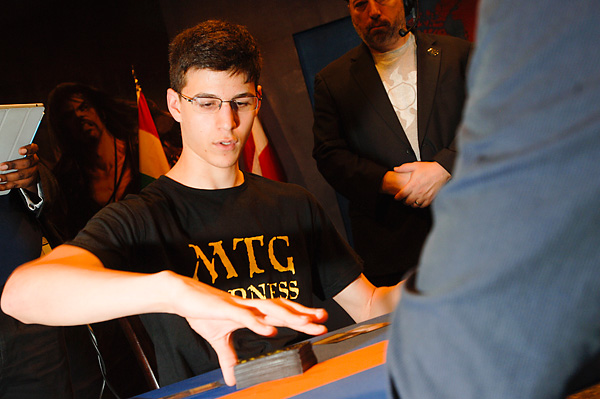 Shenhar starts his climb back into the match.

Duke started to build up another Bogle. He got a card off Kor Spiritdancer before Shenhar Electrolyzed it, and decided to put all his eggs in one Bogle. Engineered Explosives for one took care of that problem. Shenhar managed to answer the next two Spiritdancers Duke threw at him, but Duke was still burning through his deck.

Down came the fourth Kor Spiritdancer, and this one unopposed. It got outfitted with Rancor, Hyena Umbra and Keen Sense. Double Lightning Helix kept Shenhar alive at 3, with Duke at just 5. But close wasn't enough, and Duke was one game away from victory.

Duke had a "slow" start, only attacking for 4 on turn three with a Slippery Bogle with both Rancor and Spider Umbra. Shenhar played a fourth land and passed. Duke hazarded an Ethereal Armor, and when it resolved, he added Daybreak Coronet.

That was all just a Shenhar Setup, however. Cryptic Command stopped Duke's attack and sent the Umbra back to his hand. That meant he couldn't save his creature from the Supreme Verdict that came next. From there, Shenhar stopped Duke's next two creatures and summoned Vendillion Clique to begin the beats. The Clique also showed him that Duke was stuck with just enchantments in hand. Duke failed to find a creature, and Lightning Bolt and Snapcaster Mage teamed up to give the game to Shenhar.

Still, the odds heavily favored Duke. He only needed to win one of the next two games and got to be on the play for both of them.

Again he started out right with Slippery Bogle and a wealth of enchantments. Shenhar played Vendillion Clique inside Duke's fourth-turn draw step to see what was up and get an attacker into play, but the cost was heavy: Duke's attack brought him to just 6. Shenhar wouldn't let him through again. 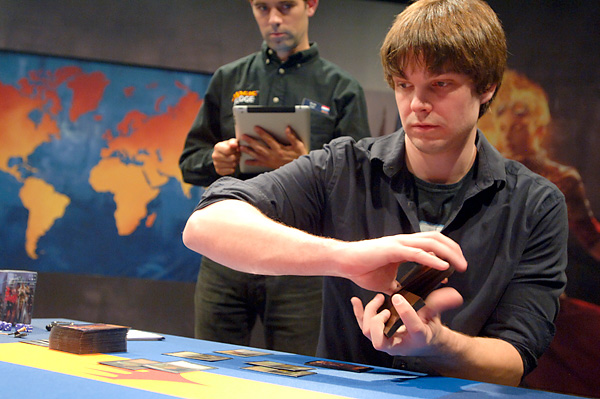 Duke's deck can keep itself flowing with cards when it needs to.

He hit back in the air and passed with four land open, playing Cryptic Command to keep Duke from attacking. How long could he keep that up? Next turn he blocked with his Clique and flashed in Restoration Angel to save it. Now he was flying over for 6 and Duke was down to 15. Snapcaster Mage rebought Cryptic Command to deny Duke yet another attack step. Shenhar hit again, unloaded his arsenal of Lightning Bolt, Snapcaster Mage and Lightning Helix to steal a second game!

Duke quickly sent back his first hand, and then his second. Pulling up a hand of five, he spent an agonized moment assessing.

Shenhar kept his hand close to his face and tried to remain still, but it was clear that excitement was creeping over him. His voice was steady, but his hands were not. He knew this wasn't automatic. Duke's deck could easily win on four. Duke dealt out his four cards, and picked them up.

He had no opening one-drop. He searched up a Dryad Arbor and gave it Keen Sense, then attacked for a card. He would only get to do it once. Lightning Bolt took it off the field. Duke replaced it with Gladecover Scout with Rancor.

Shenhar fetched out a land, then untapped and cast Engineered Explosives. His fingers trembled very slightly. The door was closing on Duke, and Shenhar knew it. He could even afford to take three from the Scout. He had all the answers. Mana Leak took care of Kor Spiritdancer and the Explosives took care of the Scout.

Duke was left with nothing but lands in play and just Rancor in hand. It was time.

Down came Thundermaw Hellkite and cracked in for five. Duke drew his card and let out a long slow breath, shaking his head. He took a moment to think, then played out Gladecover Scout and the Rancor. He passed the turn to Shenhar.

"I have a Snapcaster Mage," said Shenhar, and turned it over to show Duke.

Duke nodded. "Kill me," he said with a smile. 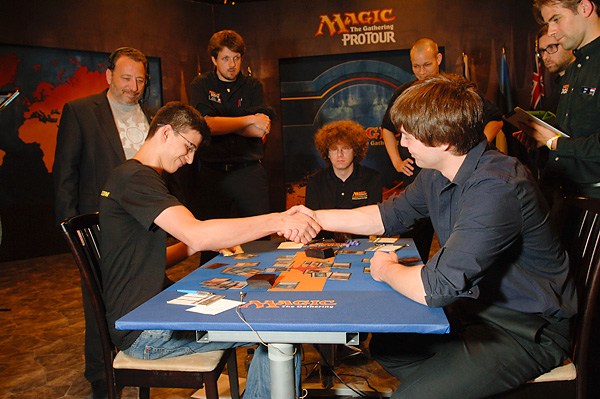 Shenhar obliged him, and Duke offered the handshake.

The crowd erupted in cheers. In a moment Shenhar was mobbed by a Who's Who of American Magic - Ben Stark, Eric Froehlich, Tom Martell, Josh Utter-Leyton and Team USA, all smiling from ear to ear and congratulating him on an incredible victory. 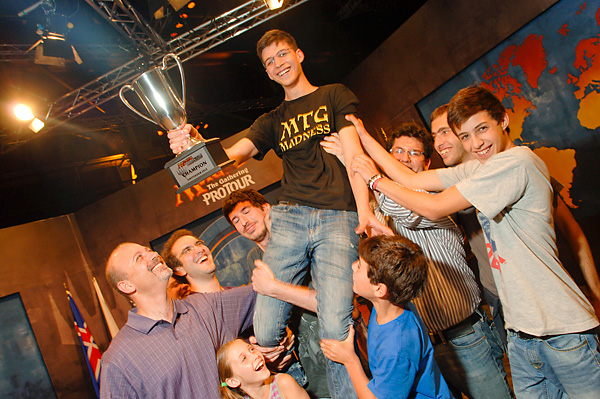