Finals: Dark Side of the Moon vs. Huey, Ben, and Casey 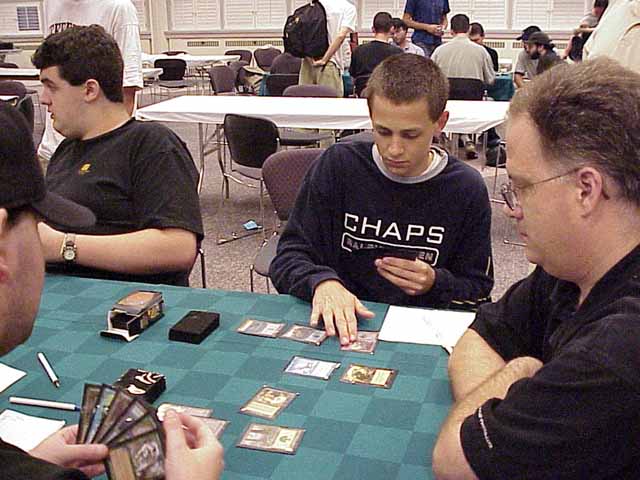 The final match of Grand Prix Pittsburgh pitted the Pro Tour's young guns against three veterans of the Boston Magic scene who have qualified for the Tour several times, but never managed to stick. You'd be hard pressed to come up with any player who is less than 20 years old but better than Billy Jensen, Ben Rubin, or Casey McCarrel. McCarrel just came off a 6-month suspension and hasn't entirely shaken off all the rust, but after he 'Grinded his way into Nationals and made it to this championship match, it seemed obvious that he's the real deal. Rubin has two Top 8's on Tour this season and 4 lifetime Top 4 finishes at Pro Tours (tying Darwin Kastle's all-time record). "Baby Huey" (William Jensen) just got on Tour last season, and this season he has both a Top 8 and a Grand Prix win (San Diego). 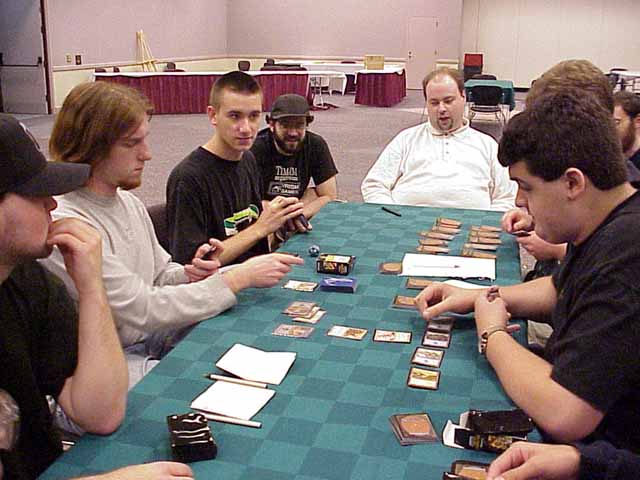 Their opponents aren't exactly strangers to the Pro Tour. Brian Lynch is well known in the Boston area as a good player and a good guy. Ray Tautic was in position to advance to the Top 8 at US Nationals until he was derailed by a random deck check. Lynch and Billy Jensen used to playtest together extensively - they both learned the game at T.J.'s Collectibles. With all of Dark Side of the Moon known to frequent T.J.'s, T.J.'s is rapidly earning a reputation as much more than just the "other" Boston area store. 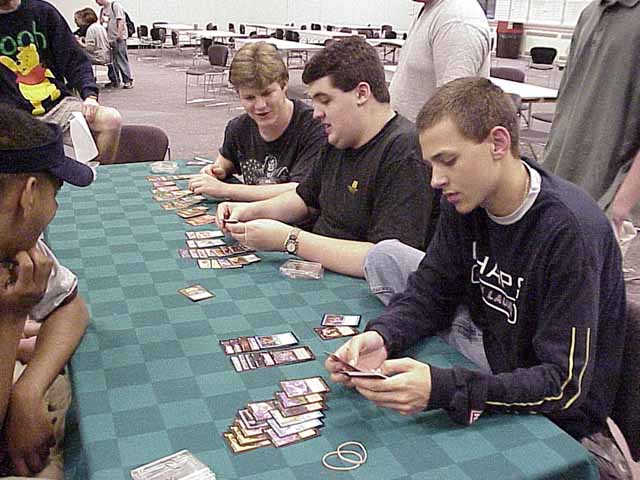 HBC won the toss and elected to kick off. (Interestingly, there does not appear to be a consensus on whether it's better to kick off or receive. Different teams have different preferences.) Huey took a Lieutenant and passed a Drake to Casey. I was a little bit surprised when Casey first picked a Cateran Brute over a Deepwood Legate after his opponent had already taken Spidersilk Armor, but Casey has been recruiting Mercenaries into play all day and having a lot of success with that strategy. Rubin wheeled Counterspell and Kris Mage on the first pack, took Outrigger 5th out of the second pack, and when he picked up an Invigorate and a Hunted Wumpus out of pack #3 it wasn't at all clear what his colors were. It quickly became clear that Ray Tautic was running a red deck against Ben so green made sense. When Lunge fell to him he never looked back, drafting red/green the rest of the way. 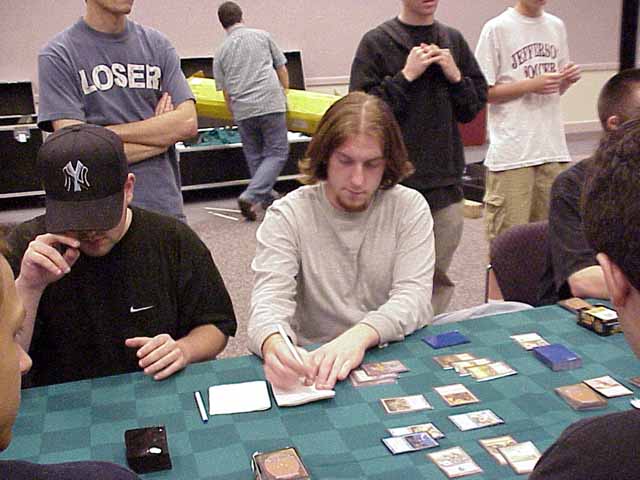 Dark Side passed both a Waterfront Bouncer and a Rishadan Airship across to HBC, Huey figured that he should take the Waterfront Bouncer to complement his white cards and head for a blue/white control deck while Casey should take the Airship and try to draft black/blue beatdown. Huey was clearly in control and running the show. He situated his teammates into archetypes as the cards allowed and once they settled into those archetypes they didn't move much. 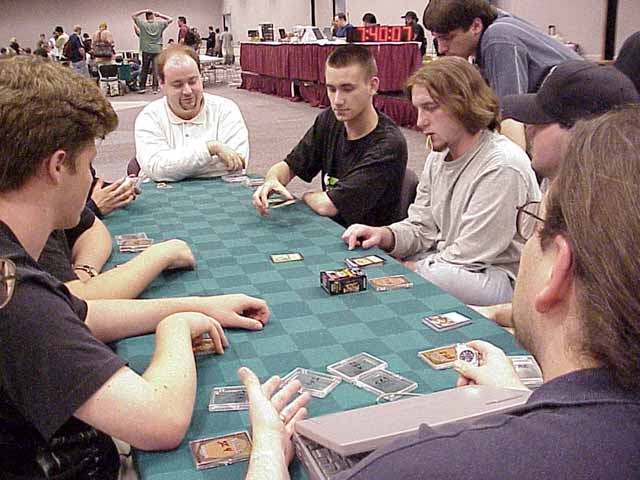 HBC didn't draft flawlessly, though. They argued over whether Huey should take Ramosian Captain or Thermal Glider. Ben tried to point out that Huey's opponent wasn't red and DS's white mage wasn't playing against their red mage, but Huey took the Glider anyway. That's kind of a judgment call, but when Casey accidentally counterdrafted Huey, all three of them saw immediately that it was a mistake. (The situation was a pack with two good white cards left that Ray Tautic (drafting blue/red) was going to get two picks out of before passing it back to HBC. There was one decent red card and Huey saw how this would play out and instructed Casey to take a bad black card. Casey decided to counterdraft instead and took a white card. That meant Tautic could counterdraft the other white cards and there was nothing left for Huey. This type of "look ahead" logic is one of the real keys to Team Rochester draft. Huey saw it, but wasn't able to communicate his intuition effectively.) 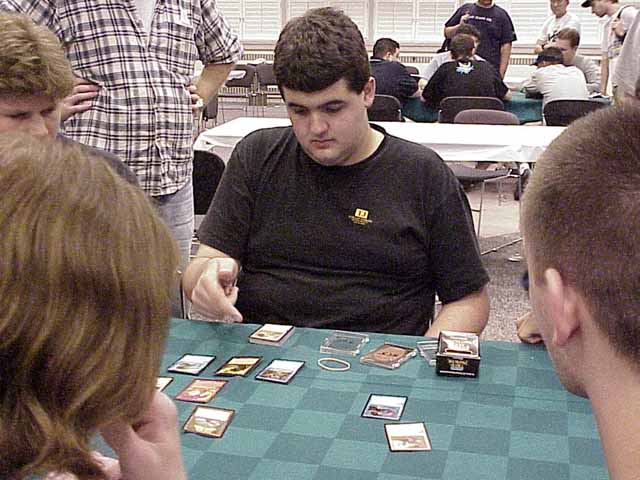 Still, HBC had a fine draft. Dark Side looked like they just stuck to pre-decided colors and didn't really try to react to what HBC was doing. I thought HBC drafted slightly better and also opened somewhat better cards. Casey busted open a Predator, Flagship while Ben had a Flowstone Overseer. Huey wasn't looking forward to playing against Massacre but when he picked up Rebel Informer for the black/white mirror matchup things looked a lot better. 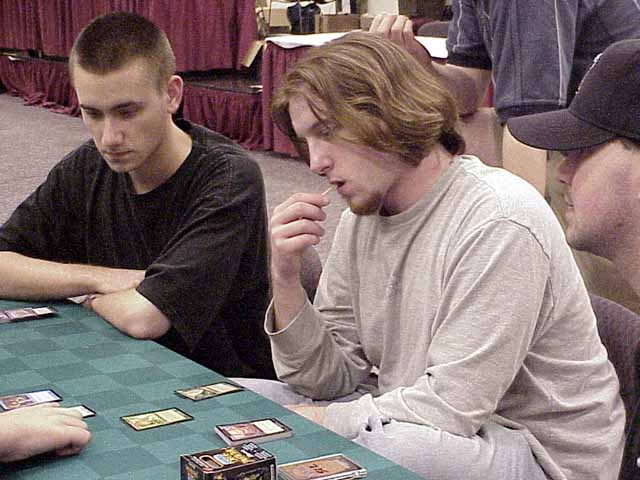 The games themselves were fast and bloody. Huey and his old buddy Brian Lynch flew through their first game while the other two matches were still shuffling. When Lynch used Ramosian Captain to recruit his Ballista Squad into play, I wondered if Ben had been right during the draft. Huey's only answer in hand was Alexi's Cloak and that allowed Coastal Hornclaw to keep dealing damage. However, when Huey drew Muzzle off the top, Lynch was in trouble. Huey had played aggressively the whole game and it didn't take long for Blockade Runner and that Hornclaw to finish Lynch off. 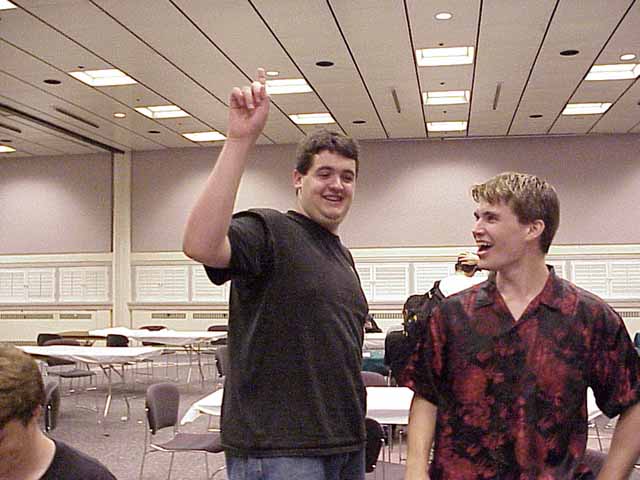 Rubin came out with Mogg Toady, Fault Riders, and Blastoderm before Ray Tautic could get Oraxid onto the table. Tautic seemed like he might be able to stabilize after chump blocking Blastoderm twice, but then Rubin tapped 8 mana for Avatar of Fury. Tautic could only hold it off with Stormwatch Eagle for a few turns ad then they too were on to game 2.

Jensen used Parallax Tide to both mana-screw and color-screw Lynch for 4 turns. Once Lynch finally got his one Swamp back, he was able t cast Massacre for free. Huey was ready: "Rhystic Shield!" The crowd gasped as Lynch's lone creature died, all of Huey's creature's survived, and Huey got to show off his anti-Massacre tech. Lynch wasn't done yet. He then tapped his 4 mana for Ballista Squad. When Huey untapped and dropped Rebel Informer, Lynch just scooped his cards up and started watching his teammates. He'd been thoroughly destroyed. Huey raised his finger and ran around the room celebrating. 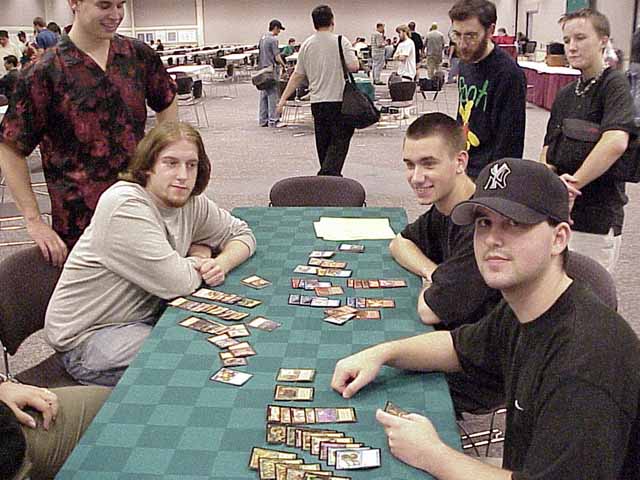 When Halpren missed his turn 3 land drop against McCarrel, everyone knew the end was in sight. McCarrel played Rishadan Airship and Fen Stalker before Halpren came up with a Vine Trellis. Then Casey Severed its Soul and continued his attack. When Casey cleaned up few turns later, the fastest Grand Prix finals in history was over.

Huey, Ben, and Casey clinched the Grand Prix Pittsburgh title 17 minutes after they started shuffling! Brian Lynch said it best after the match: "I didn't like our chances, but I thought we had one." 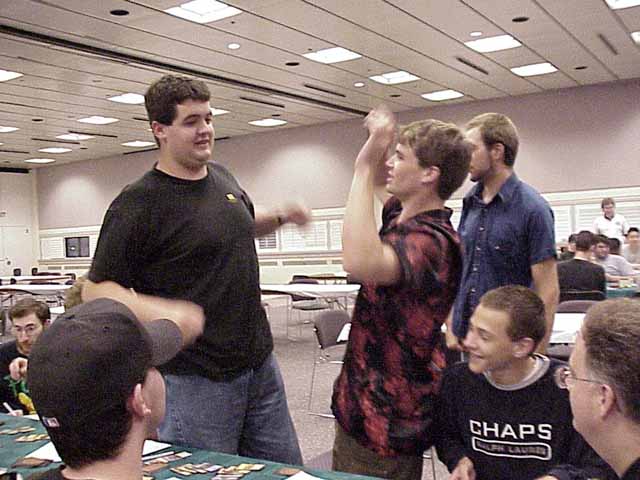