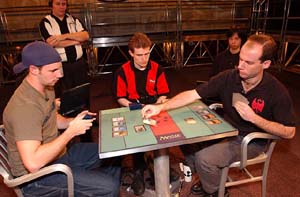 Essentially, the San Diego Masters was defined by one card: Psychatog. Unlikely as it may seem, it is the key component of the Masters' most popular deck. Fully sixteen players ran blue-black control decks of some description, and all of those were with the 'Tog. The fact that Fuller and Humpherys now stare across the final table at each other says a great deal. The strong metagame call of Steve OMS and Tsuyoshi Fujita to run green-red beats had many thinking that they'd be sitting at the big table, but the strength of blue-black was not to be denied.

Also interesting are the differences between the decks. Fuller's is full of cantrips and bounce, with just Psychatogs for the win. Humpherys's deck plays more like Tsuyoshi Fujita's IBC deck from the finals of PT Tokyo. The results of these games will probably go a long way to determining the face of standard.

Humpherys started with a slow draw hindered by two Sulfur Vents. His lack of blue mana let Fuller resolve an early Psychatog. Humpherys answered back with Nightscape Familiar. They traded hits, but when Fuller stalled at four land, Humpherys took the opportunity to Recoil his 'Tog during his endstep. Fuller let it go, pitching the Psychatog.

Humpherys was holding Upheaval, Psychatog and Lobotomy, but no countermagic. Fuller pulled Force Spike and then Predict, his land situation keeping him from taking advantage of Humpherys unprotected hand. And if you think that was saucy, you ain't seen nothing.

Fuller resolved Fact or Fiction, getting Repulse and Aether Burst over Predict, Counterspell and Psychatog. Then he ripped a land. Repulse on the Familiar at the end of Humpherys's turn resolved, as did a Predict on himself, naming Island successfully. It gave him another one. Then he drew Underground River. Things were really moving his way.

For three straight turns he Memory Lapsed Dave Humpherys's Psychatog. Another Fact or Fiction resolved, this time earning Fuller a pair of Coliseums. He untapped and played one, thinking hard while Humpherys examined and re-examined his graveyard. Fuller chose to go for Psychatog. Humpherys Counterspelled. Fuller played Gainsay. Humpherys let it resolve, then Repulsed. Fuller had no objection.

Humpherys had had enough. He tried Upheaval with a blue and a black floating. Fuller Counterspelled. Humpherys played Familiar and his third sac-land and gave it over to Fuller. He let him have his Psychatog. Lobotomy drew out Undermine, and Humpherys went for the gusto, blowing three lands and tapping out for Upheaval with five mana leftover. He played Upheaval. Fuller Countered. He played ANOTHER Upheaval. Fuller Memory Lapsed. 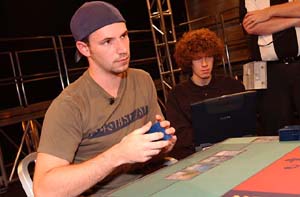 Now all Fuller needed to do to take the first game was find a bounce spell. He used a Coliseum, keeping Peek and Coliseum in hand. He Coliseumed again. Again he had just Peek and Coliseum, dropping Counterspell into the graveyard. He Peeked, seeing Familiar and Psychatog, but drawing land. He played his last Coliseum and used it.

When Fuller didn't bounce before attacking, Humpherys face lit up in relief. He chumped with his Familiar. Fuller passed it back to him. He Upheavaled successfully, dropping land and Familiar. Fuller played a sad Salt Marsh. Humpherys thought hard before playing Finkel instead of Psychatog.

Fuller was too busy being blown away by his ill-fortune "I practically picked up my deck, there. Do you know what the odds of me missing were?" "Pretty low." Fuller untapped and pulled Aether Burst to send them both home. Humpherys then made Nightscape Familiar and a Salt Marsh, banking on Fuller's dwindling library.

Fuller made Psychatog. Repulse sent it home. Humpherys made another Familiar. The Psychatog came back. Humpherys played Fact or Fiction, getting Repulse and two lands. He put the 'Tog back again. It came back again, and this time, Humpherys couldn't dispatch it. Fuller played a Burst to send Humpherys's creatures home, attacking for the win.

Game 2 was just as grueling. A turn-two Nightscape Familiar from Humpherys was Counterspelled. Then Fuller got his Predict on, naming Island. Peek went into the graveyard. Duress saw two Fact or Fiction, Counterspell, Aether Burst, Gainsay, taking Lobotomy away.

Fuller got back at him with Peek, seeing Upheaval, two Repulse, Fact or Fiction, Counterspell and Lobotomy. He missed with Predict again. He chose to let Humpherys have a Fact or Fiction, giving him Repulse, Lobotomy and land over Gainsay and land. 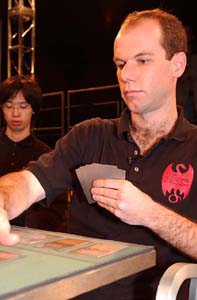 Humpherys played Familiar. Fuller Coliseumed into the goods: Fact or Fiction and Counterspell. He pitched two Bursts and his Divert, with a third Burst in hand. He continued to monopolize Humpherys's endstep with Fact or Fiction into Lobotomy and land over Gainsay, Coliseum and Repulse.

He untapped and Lobotomized Humpherys. Humpherys repulsed his Familiar in desperation. He had to let it resolve. Fuller stripped him of two more Repulses, leaving two land, Upheaval and Familiar. Humpherys untapped and dropped two Familiars.

Psychatog resolved just fine for Fuller, and when he Lapsed a Duress from Humpherys, he new he had the game in his grasp. He Bursted away Humpherys's blockers and sent in the Psychatog, smiling as he asked "Attack for ten thousand dollars?" Humpherys put his cards on the table and extended the hand.