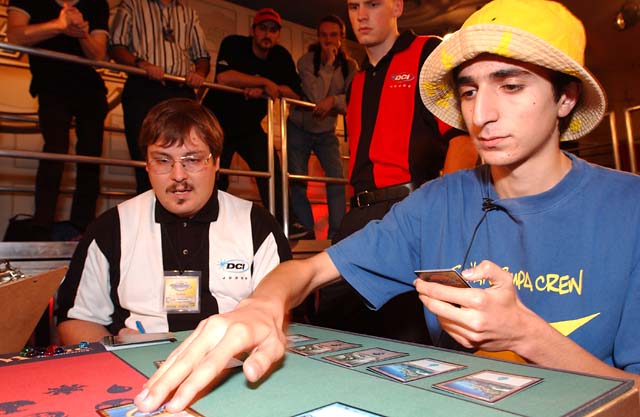 This match embodies the classic sports story of the old versus the new. These are definitely the times when we realize that Magic has actually been around for more than a little while. Representing Germany, Dirk Baberowski won PT-Chicago a few years ago in Tempest Block Draft and placed in the top 8 of Chicago 2000 the next year. Dirk's opponent, Gabriel Nassif, is a relative newcomer to the Pro-Tour, having his first Pro-Tour experience at Chicago 2001 where he finished 45th and recently with his finals appearance against Kai Budde at Grand Prix London. So in this David vs. Goliath, underdog vs. experienced, and newcomer vs. old school match, who has the advantage? Well, it's probably a good thing that Kai Budde has so much experience in Invasion Block limited, spotlighted by his win at PT Barcelona, because Dirk admitted during the match that he did absolutely no testing for this Pro-Tour except for reading the Apocalypse cards so that he could match the pictures with the cards. Both seem to be strong players, but Gabriel has been playing hard this last year while Dirk hasn't played a PT since the last New York.

Dirk won the die roll and decided to draw first. Gabriel opened up with a decent hand with 2 islands as his mana sources. On the other side of the table, Dirk had a fairly strong hand except for the fact that it lacked red mana sources. Dirk drew first blood in the match with an unkicked Faerie Squadron, but his beats were quickly silenced by a Vodalian Zombie. On the fourth turn, Dirk still had no red sources with 5 cards that required red mana in his hand in addition to a Phyrexian Reaper that could only sit back while looking at 4 land on the table. Dirk finally decided to charge his Faerie Squadron into the wall of Gabriel's zombie and newly summoned Volcanic Imp to draw a card off casting Recover on the squad. Dirk still didn't see a red source off the card drawn or the card he drew in his next draw step, and things were quickly turning critical. Gabriel was not only serving with 4 power but also drawing cards off a fresh Sleeper's Robe enchanting the imp. By the time Dirk found another land to kick up the Faerie Squadron, Gabriel simply had to flip over one of his two Rushing Rivers to finish flooding Dirk out of game 1. 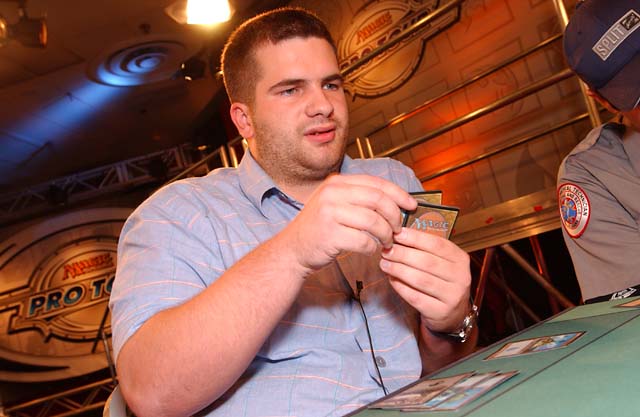 Dirk once again chose to draw first and was rewarded when Gabriel started off with a double mulligan. What Dirk didn't know was that this mulligan was into 4 Islands and a Cursed Flesh, not exactly optimal. Dirk's opening hand, however, wasn't exactly optimal either, and he easily decided to throw the 3 Islands, 2 Swamps, and 2 Mountains back into his deck for another chance. He found his second hand acceptable and the match began.

Showing the true skill that every little kiddie that paris mulligans to 5 hopes for, Gabriel ripped a Tower Drake off the top on turn 3 to start to apply the pressure. Dirk responded with a Razorfin Hunter that was made unblockable except by black or artifact creatures by Gabriel's Cursed Flesh, made possible by a Swamp he drew the turn before. Dirk still had more lethal weapons and brought down a Slingshot Goblin that didn't stop wrecking Gabriel's creatures until it had a reason to attack itself. Gabriel's struggle to survive wasn't helped by a kicked Bog Down, clearing his hand. In irony however, Gabriel ripped an Urborg Uprising right off the top to bring back the two blue flyers, Tower Drake and Cavern Harpy, who had been hiding from the Slingshot Goblin. In any other situation that would have been an excellent recovery for the freshman Frenchman, but this time it just meant that Dirk had another turn to bloody up his opponent. 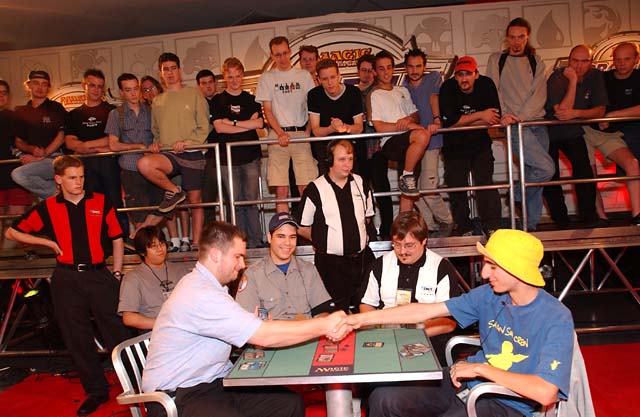 In the final game of the match, Gabriel decided to play first and kept a very questionable opening hand: 4 land, 2 Rushing River, and an Escape Routes.

Gabriel began the pressure with a turn 3 Tower Drake, but Dirk had lethal weapon 2 back from his appearance in the previous game. Just like the bad sequel, Gabriel frowned at the newly-summoned Slingshot Goblin and had nothing for it on the following turn except for a Rushing River to stall. The next turn saw the Frenchman peel a Sleeping Potion and put an end to any thoughts of home-wrecking that Dirk's Slingshot Goblin had in mind. Dirk brought in a Metathran Aerostat and took another hit from Gabriel's team while he prepared for some trick maneuvers. Using the Aerostat's ability, Dirk essentially cast a Lava Zombie though he still had no Swamps and used the gating ability to return the Slingshot Goblin. Gabriel intervened to respond and kicked a Rushing River targeting the Slingshot Goblin and the Sleeping Potion on it. Unfortunately, the Frenchman had misinterpreted the timing rules and the potion disappeared before it was returned because the Slingshot Goblin had been targeted. Regardless, the tempo of the match had changed deeply into Dirk's favor. With the ability to repeatedly shock blue creatures at his disposal, Dirk's team kept growing while much of Gabriel's could only sigh from the sidelines.