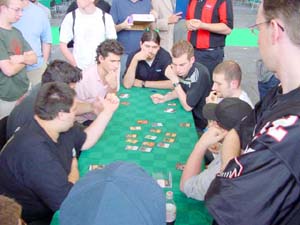 Both of these teams had two Americans and a European. RBW have south Americans Jose Barbero and Carlos Romao and Frenchman Wilfried Ranque. Ace Ten off have US players Jon Finkel, and Eric Froehlich and Dutchman Kamiel Cornelissen. Both teams only lost one match all weekend so far. RBW were beaten by Boys of Summer, and Ace Ten off were slightly outkicked by French amateurs R21 managers.

Eric's Black-white deck is helped significantly by everyone's favorite Gorgon, Visara the Dreadful. He doesn't really have any strong tribal theme in his deck, just overall high quality cards. Jose knew he was in trouble from the second pack, and so tried to draft a deck that had a reasonable chance of beating Visara.

With this in mind he tried to make his deck as quick as possible. He has two Noxious Ghouls and two Vengeful Deads to support a decent Zombie Tribe. Strangely Eric took Zealous Inquisitor over Consumptive Goo allowing Barbero to grab the Goo. This seems like it ought to be quite a powerful card in the matchup, as Eric has no removal apart from Visara. 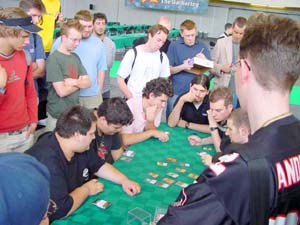 RBW chose not to have any blue drafters until late in Scourge when Carlos picked up a few blue cards. This certainly helped Kamiel's deck out as he was the only one on the table drafting blue. He also out-opened Wilfried quite severely. Rares in his deck include Windborn Muse and Chromeshell Crab. Ranque ended up red-green, with a reasonable creature selection.

His bombs include Timberwatch Elf and Canopy Crawler. He also has a Form of the Dragon, but it's not very good against Kamiel's hordes of flyers. Ranque's morphs worthy of note are Skirk Marauder, and Even better, a Skirk Volcanist which might give him a chance if Kamiel has drawn multiple Dreamers or Seaswifts 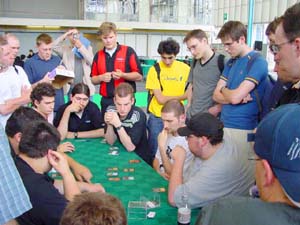 Jon Finkel's red-green deck looks very good. He started the draft with a Venomspout Brackus as his first pick, and continued to draft beast throughout. Since he knew he was playing Carlos' virtually mono-white deck, he didn't draft as much fat as red-green usually plays. In Scourge he picked up two Goblin Brigands over better cards overall, showing that he intended to go for speed. Like Wilfried, he also has a Timberwatch Elf. Other cards of note are Skirk Marauder, Extra Arms, and Hundroog!

Unfortunately the Hundroog didn't get picked and once again must languish in a sideboard. Carlos is white with a blue splash. He doesn't have enough flyers to give him an edge that blue-white often has. His Scourge cards helped him out a lot though – Rush of Knowledge, Frozen Solid, and Zombie Cutthroat to mention a few. He also has a Daru Stinger.