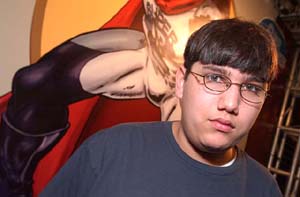 This matchup would prove to be fast paced, and based around aggressive card advantage and multiple game swing cards. Solis is running a very aggressive, low curved green/red deck with Grim Lavamancer, Wild Mongrel, Violent Eruption, Firebolt and Call of the Herd. Anderson has his own Mongrels, Flametongues and Rootwallas, but blue for Fact or Fiction, Counterspell and Repulse. If Anderson could stabilize early and make the game last longer, he would most certainly win the long game. It was getting there, and the trades between Flametongues, elephant tokens, and Repulses that would make this match interesting.

Anderson mulliganed his opening hand. Solis came right out the gate with Grim Lavamancer, and followed up with Wild Mongrel. Anderson answered back with a Mongrel of his own. Solis' deck continued to go full speed ahead as Rootwalla was played with madness on end step. The Mongrel and Rootwalla attacked, and Anderson did not block to take three damage. Solis continued his blitz with Yavimaya Barbarian. Anderson simply played a third land and ended his turn. The Mongrel and Rootwalla attacked again, and this time, the Mongrel blocked the Rootwalla. Two fairly useless Standstills were discarded, and Anderson's Mongrel survived.

A Flametongue Kavu shot down the Lavamancer, but not before it could shoot back to kill the Kavu. A madness Violent Eruption cleared the way for a second attack, but Anderson used Flametongue Kavu to bring the board back to even, although he was now at a fragile four life points. Solis then cast Call of the Herd, but Anderson kept right up with Repulse. Call of the Herd was flashed back, and Anderson cast a main phase Fact or Fiction. It gave him a Rootwalla and Repulse, but Anderson had to take a point of damage in order to cast the Rootwalla. Urza's Rage dealt the final three points.

Anderson started off with Wild Mongrel, which was targeted with Volcanic Hammer. It headed to the graveyard and Anderson was stuck at two land, but played Standstill on the empty board. Solis broke it with Call of the Herd. The token was Repulsed, and the Call was flashed back. This time, Anderson had Flametongue Kavu. A kickered Kavu Titan came out for Solis, but Anderson had Persuasion to swing the game completely in his favor. Solis played another Call and Hammered the Flametongue, but he was already far behind in card advantage and Anderson had the game entirely under his control. Repulse bounced the elephant, and Solis tried to Flametongue the Titan, but it was Counterspelled. Two copies of Nimble Mongoose made Anderson's side even more threatening, and Solis scooped. 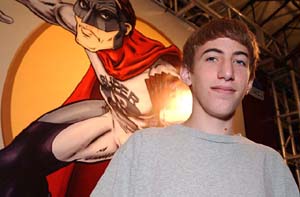 Solis curved out with Lavamancer and Mongrel, and Anderson summoned a Mongrel of his own. Solis' Mongrel got through for damage, and he brought out a second. A madness Violent Eruption would have been devastating, if not for Anderson's Counterspell. Still, he had a lot of work to do if he wanted to stabilize. Flametongue Kavu shot Anderson's Wild Mongrel, but a madness Rootwalla along with two lands kept it alive, and held off Solis' attack. Fire/Ice took down the Flametongue, and Anderson played one of his own to kill off the Lavamancer. Solis now had two Mongrels to Anderson's Flametongue, Mongrel and Rootwalla. Both Mongrels attacked, and one traded with an FTK. Solis' Earthquake would have cleared the board, but Anderson discarded Persuasion, the only card in his hand, to keep his Mongrel alive. The game now became a topdeck contest, as Solis noted "This is the fun part."

Two Mongrels butted heads, but Anderson's lived to tell the tale thanks to Repulse. Solis cast Call of the Herd, and the token died to a Mongrel. Solis kicked up Kavu Titan, which was enough to take Game 3.

Anderson started off with Basking Rootwalla, which died right away to Firebolt. Mongrel followed, and died to Volcanic Hammer. Solis summoned a Lavamancer, and did not have a green source of mana. Meanwhile, Anderson was stuck at three lands. He summoned a Mongrel, but Solis found a Karplusan Forest. Flametongue Kavu shot down the Mongrel, a Call of the Herd token was Repulsed, and the second token died to Anderson's Flametongue. The FTK died to another Firebolt, while Solis' Lavamancer continued to attack. An unkicked Kavu Titan joined, and Anderson played Nimble Mongoose with six cards in his graveyard. Solis flashed back Firebolt to Anderson's dome, and it was countered with the help of a painland. Solis was happy to trade even cards for one damage considering that his spell would have only dealt one more damage than the result, but the Counterspell did give Anderson threshold, and held back Solis' team.

Grim Lavamancer was Perusaded to join Anderson's side, but Solis kept sending heat as he used Volcanic Hammer to bring Anderson down to seven. Earthquake cleared the board of all creatures but the Mongoose, bringing Anderson down to three. This was risky, because Solis gambled away his board position for a guaranteed burn kill next turn. This proved to not work out in his favor, as Anderson cast Upheaval and reversed the game completely, bringing out Mongoose and a Rootwalla. The game seemed about to turn around, but Solis topdecked Urza's Rage just in time to finish the game and take the championship.