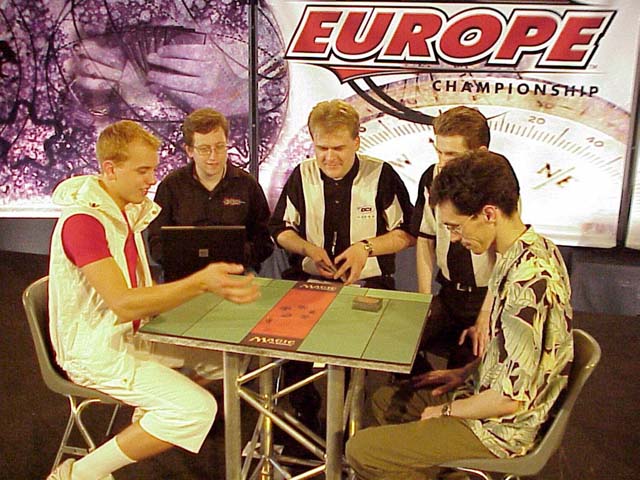 "I have no clue how to play against this deck," chuckled Nitter. The mood in the final match was friendly and very casual. Both players just seemed happy to be there.

Montreuil opened with a Kris Mage and used it to destroy a Defiant Falcon Nitter summoned. However, he missed his third land drop and got stuck at two mana for several turns. Nitter Brainstormed into a Lin Sivvi and summoned the marquee creature. Urza's Rage was impotent against the Rebel Legend, as Nitter pitched a Falcon to pay the alternative casting cost of Reverent Mantra, naming red.

As it always happens in this match up, if a Rebel survives to search once, it is a near-certain sign that the Djinn is out of the bottle. Montreuil used up a lot of direct damage to try and destroy the creatures Nitter was recruiting. A pair of Lin Sivvi and a Lieutenant later, the table was actually cleared - but Nitter was far from unhappy. He had the winning hand, and knew it. Nitter cast a Parallax Wave, able to use it to protect his creatures from fiery death as well as to remove an opponent's. Once Kris Mage was phased out, Nitter cast both Ramosian Sergeant and his third Lin Sivvi!

A slight misplay caused Nitter to draw a Ramosian Sky Captain he put away with a Brainstorm. Card economy was hardly an issue at this point, and Nitter summoned the Captain from his hand rather than recruiting it with Lin Sivvi. Aware that he could not possibly deal with all of his opponent's creatures, Montreuil made a last-ditch attempt to burn out his opponent. The problem with that strategy was that, by the time Montreuil was out of cards in hand, his opponent was still at twelve life points.

The Norwegian player cast another Parallax Wave, taking out Montreuil's remaining two creatures, and eliminating his one miniscule chance to win: by top-decking two Ghitu Fires in a row. Without his creatures, Montreuil only had one more draw step, and no card in his deck helped at this point.

Both players started the game with excellent hands. Montreuil was able to play a turn two Goblin Raider and deal early damage, then summon a Firebrand Ranger. Thermal Glider came out a turn later, shutting down all hopes of creature beat-down Montreuil may have harbored. Montreuil took the opportunity to sneak in two points of damage, even if it meant running his other creature into the wall of Glider. He also played an Ensnaring Bridge, preparing to play out his hand over the next turn or two.

Nitter top-decked a Disenchant on the very next turn. He hung on to it while building up a Rebel force. Once the mighty Sky Captain entered play, Nitter finally used his Disenchant and attacked for five in the air. Montreuil tried the same strategy as last game - to burn his opponent out. Once again, it was hardly worth trying. At ten life, board control, and a hand with plenty of cards, Nitter was very safe. Two attack steps later, Nitter was leading the match 2-0.

Montreuil played a pretty good opening. He summoned a Kris Mage and used it to destroy Ramosian Sergeant, then had a Seal of Fire take out Lieutenant, at which point Nitter was out of creatures. However, Montreuil did not have a good way to take advantage of that - he was just attacking for one point of damage per turn with Kris Mage. He was drawing a ton of direct damage spells and would literally be able to try burning Nitter out in just a few more turns.
After taking five points of damage from Kris Mage, Nitter finally cast Parallax Wave, phasing the 1/1 creature out. At the end of Nitter's turn, Montreuil cast out a pair of Shocks. On his own turn he summoned Chimeric Idol, then tapped out to cast Volcanic Hammer - only to have it Disrupted. Had he cast Hammer first, Nitter would be unable to counter either spell. As is, a successful Disrupt allowed Nitter to draw into a Lin Sivvi on the following turn. With Parallax Wave in play, it was no good news.

Nitter used an Absorb to counter Ghitu Fire targeting him, and gain three life going up to fourteen. Safe from being burned out, Nitter began to summon creatures with Lin Sivvi. At this point, the match was definitely looking like it would be a sweep.

Thermal Glider and Ramosian Sky Captain began attacking in earnest. Montreuil's last chance was to pull off a very big Blood Oath. He cast it when Nitter was tapped out with four cards in hand. In response, Nitter used up his Reverent Mantra, pitching a Disenchant and ending up with a two-card hand of Disenchant and Defiant Vanguard. On the last turn, Nitter triple-searched for more rebels, and attacked with everything. After three rounds and almost eight hours of Standard play, the champion was crowned. Norway wins the European Championship for the third time out of four.