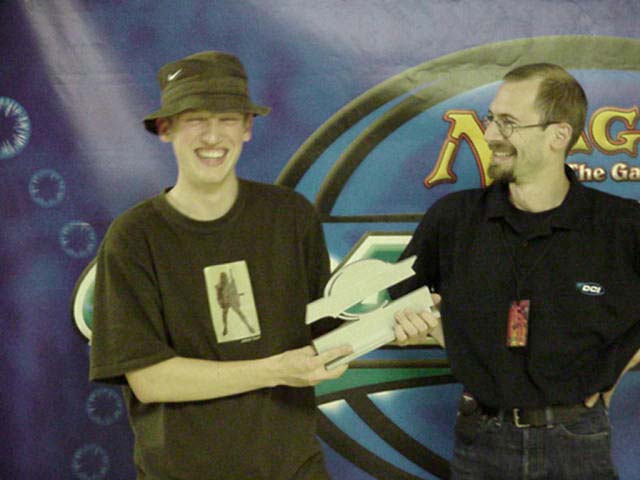 Eivind has to take a mulligan and Stephan's draw is as consistent as ever. He plays a first-turn Diligent Farmhand, a second turn Wild Mongrel, and a third turn Krosan Avenger. Eivind is already on sixteen by the time Stephan attacks for his fourth turn. He has only a Cephalid Scout as a blocker, so he throws it in front of the Krosan Avenger. Stephan has a Muscle Burst which allows the Avenger to do an awful lot of Trample damage, bringing Nitter to eight.

Eivind only has a Second Thoughts to stay in the game for another turn as he removes the Wild Mongrel, but he still goes down to four. Stephan replaces the Mongrel with a Springing Tiger, and Eivind scoops.

Some of the spectators wonder if anyone has ever had a better draw in Odyssey Limited, which perhaps has not happened, although it is possible to get a fourth turn kill with the Chatter of the Squirrel / Rites of Initiation deck.

Eivind starts this time and Stephan plays a Chatter of the Squirrel on the first turn; so he is well on the way to the fourth turn kill. He then plays the Flashback on his second tuirn and Nitter summons a Hallowed Healer.

Stephan still decides to attack with his squirrels even after the Hallowed Healer beocmes active. This is a mistake as his Muscle Burst runs right into a Shelter. The Shelter was cast on the Hallowed Healer rather than the Squirrel Token because Eivind already knew that Stephan had a second creature-enhancement card in his hand (he had played a Peek a little earlier). Meyer only has the two 1/1 tokens and now that Nitter has enough time to get a few lands into play, he is in control, summoning a Balshan Griffin.

The German has to play Acceptable Losses to kill the Griffin, but this causes him to discard Chainflinger, probably the best card in his hand. Eivind follows this up with two Pilgrims of Virtue and an Aven Smokeweaver. Meyer plays a Springing Tiger and attacks with it.

Nitter triple-blocks with his non-Healer creatures, and uses Second Thoughts after Meyer pumps with a Muscle Burst. This nets Eivind another two cards-worth of advantage. The Norwegian player now further shuts down the ground with a Beloved Chaplain, although he can't attack in the air because of Stephan's two Krosan Archer.

About ten turns later when Meyer finally manages to get Threshold, he plays Seton's Desire on his Krosan Archer, and attacks with everything. Eivind used the Luminous Guardian's special ability to allow it to block additional creatures, and everthing had to block the Krosan Archer, but the best thing about this for Stephan is that he kills the Hallowed Healer. 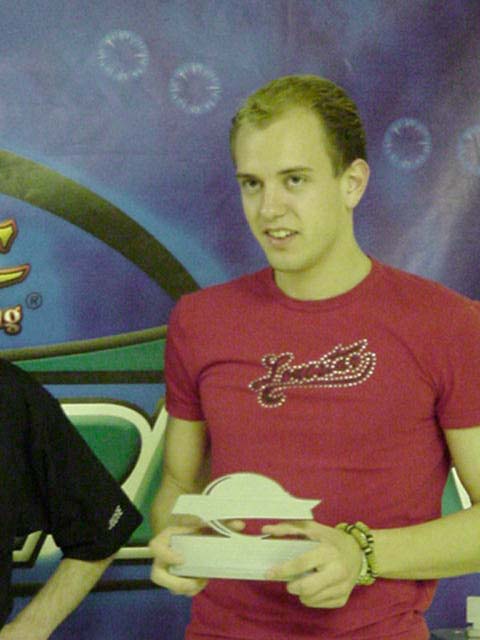 Luckily for Eivind he has an Aven Cloudchaser in his hand to kill the Seton's Desire. Eivind made a mistake as he forgot to pump up the Luminous Guardian and it was killed in combat when he had plenty of mana to save it.

Nitter played an Aven Windreader, but he still couldn't attack past the Krosan Archers. Stephan could attack though, once he had summoned a Krosan Avenger, but it was killed immediately by Second Thoughts.

It seemed like a potential risk that Nitter would be decked since he hadn't given any sign of being able to get past the Krosan Archers. Stephan had ideas of his own though since he had another Seton's Desire in his deck, but he could never use this to kill Eivind, since Nitter by now had drawn hisd Master Apothecary. He would probably use it on a Krosan Archer instead to allow the Archer to survive a Windreader attack.

Eivind had four flyers in play though, an Aven Windreader, two Kingfishers, and an Aven Cloudchaser, while Stephan had only two Krosan Archers. Eivind couldn't attack immediately with all the flyers since he would lose to an all-out counter-attack.

Five turns later Eivind drew his last card and had to admit defeat.

Stephan Meyer is the champion of Grand Prix Vienna !