atrick Chapin has been around Magic: the Gathering for a long time, longer than most people playing today. Finding his first success on the now defunct Juniors circuit, the Hall of Famer's first Pro Tour Top 8 came at Pro Tour New York in 1997. His second came two years later in Los Angeles.

Since then, he's picked up two more Top 8s and a handful of Top 16s on his way to becoming one of the best known and longest-lasting players and writers in the game. He's the rare kind of player who somehow has more Pro Tour Top 8s than Grand Prix Top 8s because he spends so much of his time dedicated to focusing on only the highest levels. With his legacy secured and his ticket punched to the Pro Tour for all time, Chapin has just one thing on his mind: winning his first Pro Tour.

He's come close before. A second place at Worlds in 2007 when he broke the format with Dragonstorm was the nearest he came to calling himself a Pro Tour Champion. Until now. Doing so would not only let him check that off his bucket list, but would also qualify him for the World Championship, something he says is his dream.

Standing in his way is a start that's shooting to the top about as quickly as possible. Nam Sung Wook has Top 8'd two Grand Prix this year, including a win in Melbourne. He's also the current leader in the Magic Online Player of the Year race. Add in his appearance in the finals this weekend, his membership on Team MTG Mind Card, and his status as the only South Korean player ever to make a Pro Tour Top 8, and it's clear we have a player whose stock is on the rise. 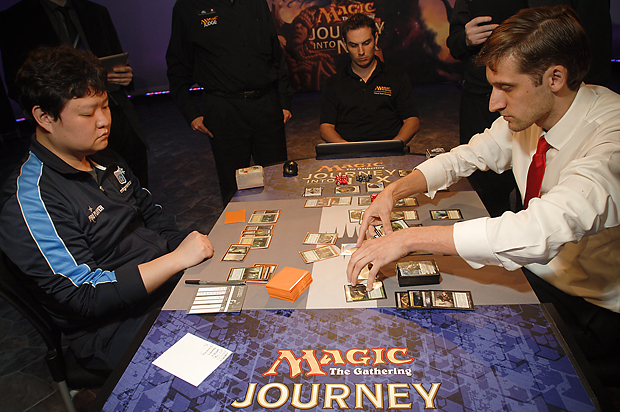 Hall of Famer Patrick Chapin and Nam Sung Wook may have been sporting the same colors for their Constructed decks, but the two went down different paths in how they built their deck. Would Chapin's midrange strategy earn him his World Championship slot, or would Nam look to the stars and lock up a win in South Korea's first Pro Tour top 8 with constellation effects?

Chapin's trusty Junk Midrange deck has served him well over the course of the weekend, losing only once over the course of 10 rounds. Most of the rest of his team, ChannelFireball: Pantheon, opted to go with BUG Control, but Chapin broke ranks on the third color in order to play Elspeth, Sun's Champion, Fleecemane Lion, and Brimaz, King of Oreskos alongside the normal black and green options.

The deck is positively packed with bombs, so much so that Chapin liked to call the deck "Junk Rares."

What he doesn't call it is Junk Constellation. That title is reserved for Nam's Eidolon of Blossoms brew. Along with the Eidolon itself, Nam packs a number of enchantment creatures – including Brain Maggot and Herald of Torment – as well as the ever-present Elspeth to wrap things up.

This isn't the first time these two have met, either. Nam was Chapin's lone constructed loss on the weekend in the late rounds. Chapin actually could have eliminated Nam from contention and wrapped up his own spot with a neat little bow, but Nam's superior draw engine carried him past Chapin when it was best out of three, and he certainly hopes it will again now that we're playing best out of five.

In a match that could be as grindy as this one, Chapin spied the first bit of advantage, firing off a Read the Bones after ramping with a Sylvan Caryatid. Nam ramped as well and set out to disrupt Chapin's plans with a Brain Maggot. Even in the early turns the players were grinding out small advantages every turn.

As we passed into the mid-game, things started speeding up. Fleecemane Lion made a brief appearance on the battlefield before dying a hero's death to Hero's Downfall. Brimaz, King of Oreskos showed up as well and started attacking. 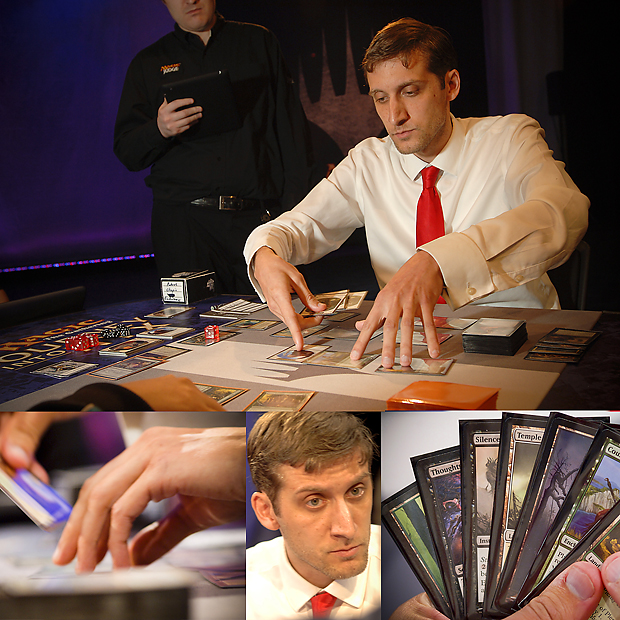 Nam then made a curious play, opting not to cast an Eidolon of Blossoms with available mana and a Thoughtseize coming the following turn from Chapin (known thanks to Courser of Kruphix). Since he had scryed that turn, it became apparent he was hiding something he didn't want to lose to Thoughtseize.

That something, it turned out, was Banishing Light, which sent Brimaz off somewhere, I know not where. For a moment, the board looked even.

But just a moment.

Silence the Believers silenced the Brain Maggot and returned Elspeth to Chapin's side. A few turns and a few dead draws for Nam was all it took to give Chapin his first win.

Chapin had a lot of tools available for the post-board matches he'd need to secure the victory. Deicide, Glare of Heresy and Feast of Dreams all seemed tailor-made to match up with Nam.

But Nam was ready for that plan. He had both Fleecemane Lion and Reaper of the Wilds as insurance against decks overloading on enchantment removal. The test for Chapin would be finding a way to balance the right removal against the correct threats.

Chapin's Thoughtseize revealed an interesting hand from Nam. Two Thoughtseize and a Silence the Believers rounded out Nam's hand of lands, and Chapin stole the Silence to keep the match as grindy as possible. Nam, for his part, fired back one of his discard spells and stole a Silence as well. 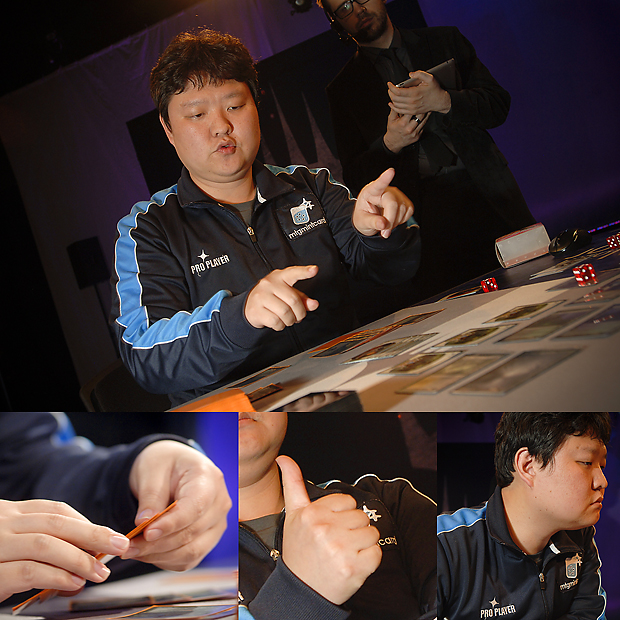 Nam's deck can bring things to a war of attrition, in which he is favored with his powerful constellation effects.

The players traded discard and Courser activations for several turns before Nam landed a Reaper of the Wilds. In this match-up, Reaper was incredibly difficult to kill without Elspeth, Sun's Champion, and Chapin's ally from the previous game had abandoned him.

In fact, Elspeth had gone completely to the other side, as Nam summoned the planeswalker to defend him from Chapin's Coursers and, a few turns later, monstrous Fleecemane Lion. When Elspeth spit out an emblem to boost the five remaining soldiers, Chapin wasn't dead dead, but he was dead enough to know it was time to move on.

Who would Elspeth side with next? And can anyone defeat her if they don't find her favor in time?

An early Thoughtseize from Nam revealed a pretty speculative keep from Chapin. Two lands. Two Elspeth. Glare of Heresy with no white mana. Hero's Downfall. Fleecemane Lion. The Lion found its way to the graveyard while Nam found a Brain Maggot to disrupt Chapin further.

It also revealed a Mana Confluence, making Nam's choice of Fleecemane Lion all the better.

While Chapin struggled to find something to do – anything at all – Nam brought in a Herald of Torment to start attacking. It got in one good hit before Silence the Believers was able to retrieve Hero's Downfall and remove the Herald of Torment. 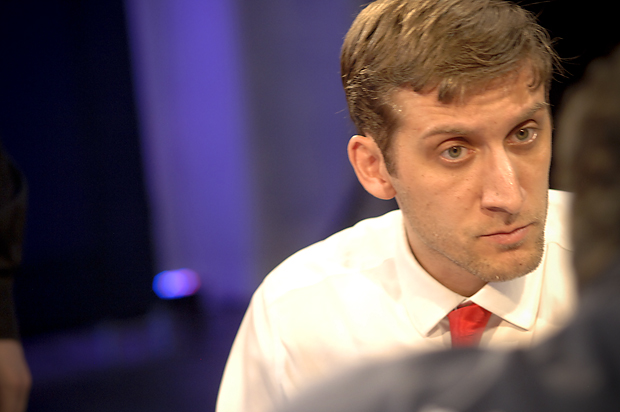 However, Chapin might have jumped the gun with the removal spell, as Nam slapped down Elspeth, Sun's Champion immediately after. So Chapin went with the only other response he could.

Oh, also a Glare of Heresy the following turn.

Unfortunately for Chapin, he was forced to minus his Elspeth in order to kill off Reaper of the Wilds. That allowed Nam's leftover tokens to, once again, force Elspeth from the battlefield.

Only to be replaced by another from the Hall of Famer. Only to lose it to Hero's Downfall. Only for Chapin to cast his third Elspeth of the match.

So, yes, Elspeth was key.

Still, Nam had yet another answer, using Banishing Light, the last card in his hand to remove the Planeswalker – at least for now.

Elspeth, so finicky in her loyalty this match, finally found a home she liked well enough to stick around for a while. With no answer and no way to break through, Elspeth...I mean Chapin...took down yet another game.

Chapin, whose hands so often shake while playing Magic, was as calm and collected as I've ever seen him. Just one win away from his first Pro Tour victory and all of the spoils that go with it, there had to be some nerves, some anxiety bubbling under the surface.

But on the outside Chapin looked calm and focused.

Nam, on the other hand, looked frustrated with his opening hand. The reason was simple – he had no green mana to go with his Sylvan Caryatid with the title on the line. Two scrys failed to find a third land, and you could see the agony on Nam's face. 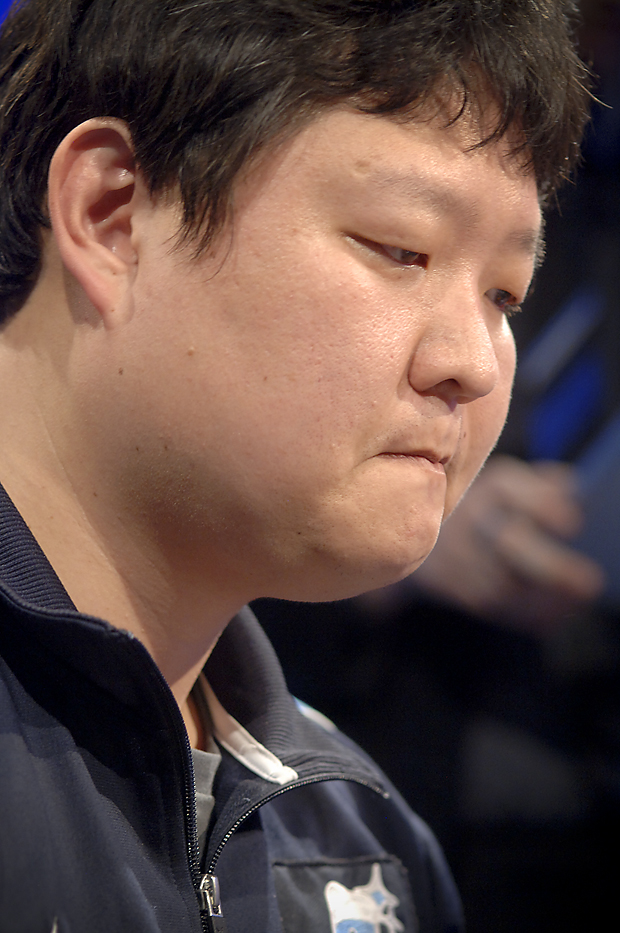 Struggling to keep up after a mana stumble, Nam feels his chances of Pro Tour fame slipping away.

Chapin, on the other hand, had plenty of green mana, certainly enough to land a second turn Fleecemane Lion and feed the attacks that followed.

With each passing turn, Nam slipped the top card of his library carefully onto the table, breathed in, and checked for mana. With every turn he missed, he grew more and more resigned to his fate.

A Thoughtseize from Chapin revealed plenty of action in Nam's hand, but without a third land, absolutely none of it was playable. Every non-land made him grimace. The first land he saw made him smile slyly, knowing his first play – Banishing Light – wouldn't last long.

And indeed it didn't, as Deicide returned the Lion just in time to watch it go monstrous. 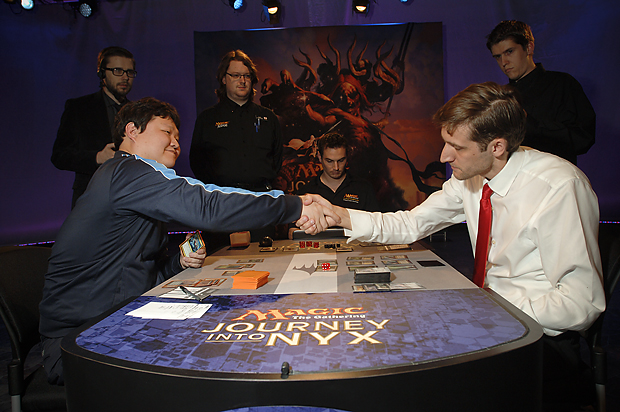 And with that, Patrick Chapin was the Champion of Pro Tour Journey into Nyx!

And what did it mean to the Hall of Famer after all these years, all of those hours of playtesting, and all of the narrow misses?

"It means that I have a chance to play in the World Championships." 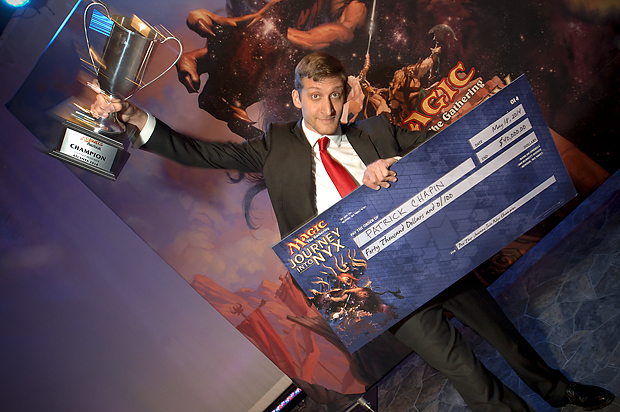