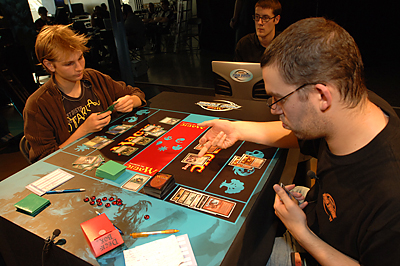 Andre Müller and Remi Fortier battle for the top slot in Valencia.I've been tossing the word epic around a great deal this weekend. It's a great word. Only four letters long, it manages to somehow sound like a word much larger than it actually is. With all of the precedents set this weekend, it just always seemed like an appropriate description. Sure, Enduring Ideal may have had a little to do with it, but that just makes it that much better. Seriously, think about all of the things that happened this weekend.

We had a deluge followed by a recession.

The tournament was somehow held in two days of play instead of three.

And we did all of this, for the most part, at the last minute.

Three wins from now, one lucky player would get gratification for all the sacrifices he'd had to make leading up to this match. All of his hard work and the events he had to go through this weekend would be repaid in full. In one corner was Remi Fortier, a 16-year-old student from France playing in his first PT Top 8. All he had to do was get through Andre Müller, a man over half again his age who is one of the most experienced pros in the Top 8. Outcome aside, this match was going to be epic.

Remi won the coin toss and decided to go first, but it was Andre who made the first contribution to the board. One Lotus Bloom is a great turn-one play. Two Lotus Blooms are the backbone of a really explosive draw. It wouldn't be too long before Andre would be able to play Ideal. Remi just set his eyes forward and started doing what his deck does—dropping Tarmogoyfs as early and often as possible. Andre built up his mana and prepared for the impending showdown.

Two turns later Andre's Lotuses ( I was kind of hoping it was Loti) started to bloom. Remi had a Stifle to stop one, but the other was still enough, combined with a Tinder Farm, to power out an Enduring Ideal. The first of many Ideals snatched a Solitary Confinement to stop the beats that Remi was laying. Two Tarmogoyfs could deal a lot of damage really fast, and, since Remi played Venser, Shaper Savant, Andre wasn't quite out of the woods yet. 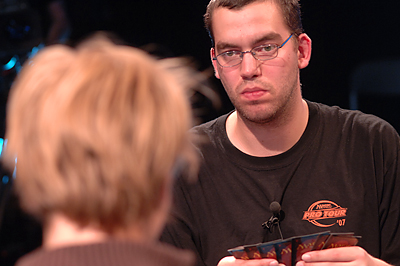 Andre Müller focuses on the win. Andre's initial seven wasn't anywhere near what he was fortunate enough to draw in the first game. In fact, it was bad enough that keeping was totally out of the question. His second six were just fine, containing a couple Invasion sac lands, a Seething Song, and his deck's namesake, Enduring Ideal.

Remi got out of the gates with a Dark Confidant, making this yet another Pro Tour Finals appearance for Bob Maher. A Counterbalance soon followed, and Remi build up his board even more with a soon to be out of control Tarmogoyf. Unfortunately for Andre, his initial couple of lands were still the only lands he had, and he stumbled a turn before finding a Timber Farm on the top of his deck.

The beatings were firm and fast. A swing from Remi's team knocked Andre down to 13, after which the Frenchman added a Sensei's Divining Top to his Counterbalance and Dark Confidant. Andre did find a Boseiju, Who Shelters All, though, which would likely allow him to get his Ideal into action next turn, and free of any worry about countermagic. That would leave him with no lands other than Boseiju in play if Remi had anything at all. When Andre went for the play, Remi did indeed have a Venser, Shaper Savant, about the best thing in the world for him. Now, with no lands and an unplayable Enduring Ideal back in his hand, Andre moved on to Game 3.

This match had evened up quite nicely and proven incredibly interesting to watch thus far. Andre began the third game with a stellar Lotus Bloom and Sensei's Divining Top opener. Remi's first conscription was a Trinket Mage getting a Top on turn two, courtesy of Chrome Mox. He had a Counterbalance in his hand, so he was ready to set up the soft lock on his following turn. When Andre passed his turn with only a land drop, Remi was more than willing to show Andre his combo.

Andre's unsuspending Lotus Bloom ran into a Seat of the Synod that Remi had stacked via his Top. Despite losing his Bloom, Andre still had an Ancient Spring, Sulfur Vent, and a Seething Song to power out an Enduring Ideal. Remi only sighed and let Andre begin his search. Form of the Dragon was the first he found, and the enchantments just threatened to pile up from there. Remi tried digging a little deeper with a Thirst for Knowledge or two, but when answers eluded him, he calmly and quietly picked up his cards. I'll let you decide whose combo was better that game.

Apparently playing in the Finals of a PT can be a little hard on the nerves.

"This area is missing an ashtray," Andre said as he presented his deck for a cut. Remi smiled a bit when Jaap Brauwer responded with, "There aren't really a lot of people smoking in here."

I know what you were really thinking, Andre, and there will be plenty of time for that if you can pull another win out. Remi is going to do everything in his power, though, to delay Andre's smoke break. 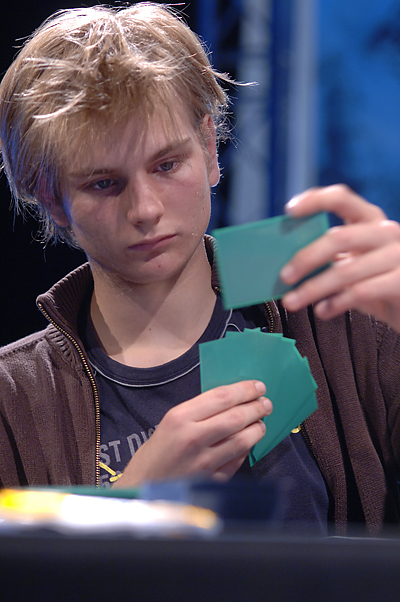 Remi Fortier keeps his cool. Remi got on the board first with a second-turn Tarmogoyf. He was a just a little guy for now, but puberty was on the horizon. A Counterbalance on the third turn was a pretty nice addition to his side, provided he could either get lucky or find a Top (which would be lucky indeed). When Andre played Burning Wish the following turn, the Counterbalance flipped up a Venser, which could be really good later, but wasn't what he needed right then. Andre's Burning Wish got Cranial Extraction, which he had wished for in an earlier game but never played. Maybe he'll dignify us by actually playing it this game.

So much for that. Andre just played a Seething Song and sacrificed an Ancient Spring to cast Enduring Ideal. Nice Cranial Extraction. The first enchantment, in what was sure to be an epic string of them, was a Solitary Confinement. A Counterspell from Remi stopped the second Enduring Ideal, and a Venser returned Andre's Solitary Confinement to allow him to attack. Stifle stopped the next Ideal, and with that, since Andre was not allowed to play spells for the rest of the game (epic!), he had to eat the lethal damage next turn.

As if the adrenaline level wasn't high enough, now, it's become win or go home. Both players are at their highest level of focus, and you can feel the intensity. Even the usually candid Andre Müller put his game face on. What time is it? Game time.

Despite the ramifications of this game, it was unbelievably fast. Remi used a Chrome Mox to power out a first-turn Dark Confidant and followed that with a second turn Trinket Mage for a Sensei's Divining Top. Andre just continued to build his mana with an Ancient Spring, a Tinder Farm, and the powerful Boseiju.

A few turns later, all either player had done was draw, play lands, and attack. Soon, Andre found himself in danger of being killed. Faced with no choice, Andre had to move in and go for it. He sacrificed two lands and dropped an Enduring Ideal onto the red area of the playmat. Remi calmly tapped four of his lands and slid his Venser, Shaper Savant (MVP!) right next to the Ideal. Andre just smiled and extended his hand. 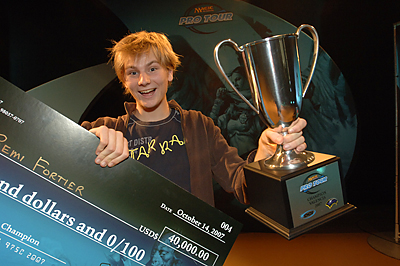