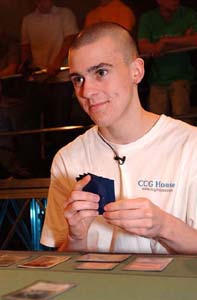 Eugene Harvey has done something impressive today, winning his first two Top 8 matches to join Jon Finkel and Mike Long as the only people to ever make the US Team more than once. But he isn't satisfied – the young Team CMU member wants to go home the champ.

To do so, he will need to defeat newcomer Eric Franz from Portland, Oregon. Franz is playing Psychatog, the same deck Eugene beat in the quarterfinals (Matt Rubin) and semifinals (Andrew Ranks).

Franz went first and was able to Force Spike Harvey's turn-2 Merfolk Looter before putting out the dreaded Psychatog himself on turn 3.

Harvey had another Looter and put it into play when Franz was tapped out. He then played a Wild Mongrel, which Franz allowed, keeping the 'Tog on defense. Harvey looted away a Deep Analysis and tried to flash it back, but Franz played a Memory Lapse that effectively countered the flashback card.

Both players took about four turns off from casting spells and just sat there amassing cards. Harvey was also Looting to keep his hand as businesslike as possible, and eventually decided to break the silence by casting another Looter. Franz Counterspelled.

Franz then added another Psychatog to his side of the board, and Harvey didn't fight him, saving his resources to fight over the Opposition he attempted on the following turn. Franz had to discard a Nightscape Familiar to his 'Tog just to enable a large enough Circular Logic, but Harvey had a Logic of his own, and cast it via Looter-enabled madness.

Franz seemed distraught at facing Opposition and he needed to find answers. So he cast Probe with the kicker, discarding another Probe and a Salt Marsh, and leaving himself with a hand of Recoil and Counterspell. Harvey ditched two lands, ending up with a two-card hand as well.

One of Harvey's two was a Squirrel Nest, but Franz was money against that. He Recoiled the land it was on during his next upkeep, and had the counter ready for Harvey's Circular Logic.

Harvey put out another Mongrel and started denying Franz black mana during his upkeep, which was a great play considering Franz had another 'Tog and eventually a Nightscape Familiar in his hand. Harvey was looting away, and found a pair of Flametongue Kavus (remember when that guy was the top dog in Standard?). The first was Logiced, but the second removed six cards from Franz's graveyard. Picture a red 4/2 Eater of the Dead.

Franz finally found an Underground River and put out a Familiar, but it wasn't enough. Harvey tapped all his creatures and swung in for lethal damage on the next turn with two Mongrels, a Flametongue, and a Looter.

Franz went first again in game 2, but Harvey had the first play with the amazing turn-1 Birds of Paradise. He played a Looter on turn 2 with one up as Force Spike protection, and it resolved. Franz put out a Psychatog, and then Eugene went for the throat with a turn-THREE Opposition. Franz sighed, but he was holding a pair of Ghastly Demises as well as a Recoil, so things weren't looking too bad.

Things got a little worse for Franz when Eugene resolved a Deep Analysis and a second Bird. On Franz's upkeep, Eugene tapped one of Franz's four lands, forcing him to Fact or Fiction during his draw step. Eugene split the piles Familiar/Cephalid Coliseum vs. Upheaval/Ghastly Demise/Repulse. Franz took the big pile. The piles seemed to be "good cards" versus "bad cards," but maybe Harvey has a plan.

Franz Ghastly Demised the Looter and a Bird during his next turn, leaving Harvey with just a Bird and an Elf for monsters. Harvey summoned a Wild Mongrel and flashed back an Analysis, leaving him at 9 life, but with six cards. Franz tried to EOT Repulse the Mongrel but Harvey had Circular Logic at the ready. No fair trying to bounce\ the 2/2 Icy Manipulator!

What Franz did do, however, was use his third Demise on Eugene's other Bird. By keeping Eugene low on creatures, Franz was setting up either a potential Recoil/Counterspell on the Opposition, or just a Big Ups (Upheaval).

But Harvey had more creatures to deploy: another Mongrel and another Elf. At the end of Harvey's turn, Franz went for it: Recoil the Opposition. But Harvey had a Logic, which Franz was forced to use his Counterspell on, leaving him with just an Upheaval in hand. The big shocker came when Harvey put a second Circular Logic on the stack, effectively protecting his Opposition. 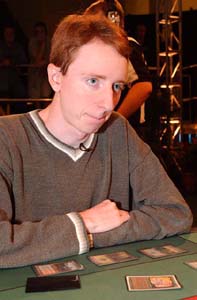 Harvey wasn't applying much beats – only two per turn via Mongrel – and he had to keep Franz away from eight mana (Ups + land = 'Tog). Franz kept drawing land and looked to be in position to try that trick on his next turn.

Eugene knew he didn't have enough guys to stop the Upheaval, so he attacked for four with the Mongrels, bringing Franz to 10.

The cards in Harvey's hand must have been scaring Franz, because he never pulled the trigger on the Ups. At the end of Harvey's turn, he tried a Repulse on an untapped Elf, which was met with Gainsay. Ah, Gainsay. Now it was apparent why Franz was afraid to Upheaval.

He drew Duress on his next turn, showing Eugene to have run out of gas, holding four land. Big Ups time. Upheaval resolved, as did Psychatog. Eugene was now in chump-block mode, needing to make a guy and block every turn for the rest of the game.

He seemed up to the challenge, casting three Elves in the first two post-Upheaval turns, and then a Wild Mongrel. Suddenly things didn't look so bad for Harvey. With the extra Elf to block, the Mongrel could theoretically attack for lethal damage (6). So 'Toggy stayed home.

Eugene then played a second Mongrel, and even had a Logic to defend against Franz's Logic. On his next turn, he recast Opposition. Somehow he had pulled out of an Upheaval/'Tog turn. He tapped two lands on Franz's upkeep, and then tapped the 'Tog. Franz drew a Fact or Fiction, but with only four mana available to him, it couldn't help. The Mongrels swung in for the kill.

Franz had to mulligan a one-Swamp hand, even though he had two Ghastly Demises and a Duress. Head Judge James Lee denied all responsibility stemming from enforcement of the three-minute shuffle-and-sideboard rule, claiming Franz had used the mulligan just to be able to shuffle more.

Franz's second hand was pretty sorry – five land and Ghastly Demise – but he kept it. Eugene came out like gangbusters with an Elf, a Bird, and Looter by the second turn. Luckily for Franz, he found a Pyschatog by his third turn, allowing him to discard a Swamp and Demise the Looter AND attack for two.

Harvey Deep Analyzed on his turn, and then Franz looked at the decay game state and said, "Let's see if I can kill you with Psychatog this turn. Probably not."

Harvey: "You did two with it last turn. That was more than ever."

It looked like there would be no coup de grace for the 'Tog in this game either, as Harvey resolved an Opposition on his next turn thanks to Gainsay on Franz's last business card, Counterspell.

Harvey drew some more cards via Deep Analysis, and then put out a Looter and a backup Opposition. Franz drew a Fact or Fiction, and was looking to claw back in the game with a little card advantage of his own. He chose Recoil/Repule/Swamp over Recoil/Fact or Fiction.

Franz eventually drew into a Duress, revealing Harvey's hand of Looter (freshly Repulsed), Gainsay, Logic, and four land. Harvey hadn't been through much of his deck, but had seen 15 of his 21 land (and only 12 spells), but he was somehow still in control of the game. Franz chose Logic and then cast a second 'Tog.

Harvey put out his Looter again, as well as a freshly peeled Birds of Paradise.

No one could get anything going for the next few turns, and the board became littered with land. After about four turns of "draw-loot-go," Harvey eventually found another creature – a second Looter. Doesn't his deck have four Squirrel Nests in it?

The game bogged down a little more when Harvey put out a Mongrel and Franz a Nightscape Familiar. Harvey's Looters eventually found a Nest, but he knew Franz had a Recoil. Harvey had Gainsay, but then... nothing. Recoil was countered; Nest stayed in play. Bad times for Mr. Franz.

Over the game's remaining turns, Franz drew basically nothing but land, while Eugene was adding a token-per-turn as well as casting more Birds and Mongrels. Eventually, Eugene just tapped every permanent Franz had over the course of two turns, Cast Deep Analysis twice for three extra cards, and attacked with the team, pitching the grip to the Mongrel for lethal damage.

And just like that, Eugene "Eubroken" Harvey is the 2002 US National Champion, joining Eric Franz and Andrew Ranks on a squad that will have their work cut out for them at Worlds.