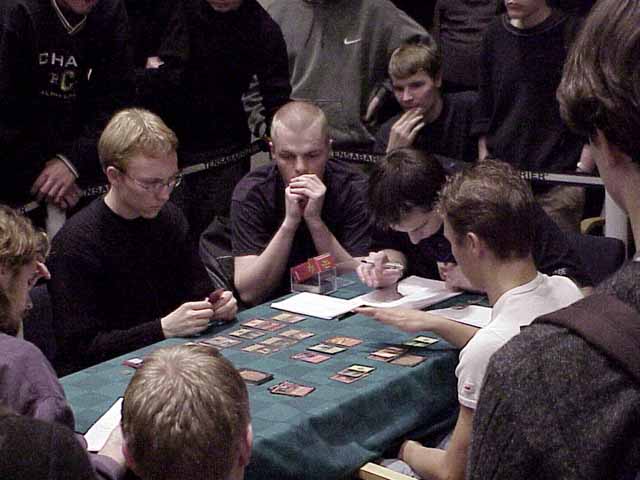 The Final between Noah Boeken (NL) and Erno Ekebom (FIN)

Noah was playing a red/green/white deck with questionable mana distribution. An example of this would be having only 4 white mana producers for a turn 2 Llanowar Knight (of which he had 2). The Knights were in the main deck primarily because his first opponent was black, but he kept them in after boarding most of the time anyway. He had a fairly even mana curve though with a couple of great cards in this match-up: an Angel of Mercy and a Verdeloth the Ancient.

Erno had a red/green deck with splash for black, which had quite a few reasonable creatures and some combat tricks which proved useful against Noah. More importantly he had Darigaaz which is amazing in this match up, and mana accelerators to get it out really early.

Noah won the toss and elected to play first (a decision that he later changed in his next game after having got a feel for the match-up).

N1: M - Thunderscape Apprentice
E1: Shivan Oasis (he manages to cast this turn 1 every game!)
N2: P - Attacks with the Apprentice
E2: M - Fertile Ground on the mountain , but Noah casts Wane on it to destroy it! - This was a very aggressive play from the Dutchman, as he was hoping to decelerate, or even screw his opponent while his small guys came in, rather than saving a good combat trick.
N3: S - Attacks with the Apprentice again and casts a Pincer Spider
E3: S - Far from mana screwed though, Ekebom casts Harrow, sacrificing his Mountain, to fetch a Mountain and a Forest and casts Tribal Flames on the Spider.

Still trying to keep up the early beats Noah casts a Slimy Kavu (he is stuck on 3 land), but it is met by first a Kavu Climber then a Verduran Emissiary, and finally a Battery token. All Noah could draw was 2/2s from this point and his Apprentntice could not achieve parity as Erno had both Aggressive Urge and Explosive growth as combat tricks. Facing a Kavu Climber attacking for three turns in a row, Boeken was starting to feel uncomfortable, but then the Fin's draws dried up (with the exception of being able to Malice a Thunderscape Master) and a Pouncing Kavu managed to almost to finish the job when a Dustwalker showed up (unblockable). This would still not have saved Erno, but the turn he was going to die he drew his Dragon and managed to survive on 1 life before he served for 9 un-blockable to win the game.

They both take a while thinking about how to sideboard (Erno brings in some early blockers like Llanowar Cavalry) then Noah elects to play second.

As a result of a Wane killing a Fertile Ground and an Assault killing a Thornscape Apprentice the board is clear again until Noah's turn 4 when he makes a Viashino Grappler. Erno replies with a Battery, but chooses not to block with it when the Grappler comes in the next turn. Up to this point no one has missed a land drop, but Noah then casts Frenzied Tilling on his opponent's only swamp. This play absolutely devastates Erno as he has a Dragon in his hand and cannot cast it right up until the end of the game. The Fin makes a Pouncing Kavu (with kicker) as a means of defense, but an Angel of Mercy goes all the way. Noah kills his opponent while he rests on 17 life!

Ekebom was fairly mana flooded in this match.

Interestingly, Erno chooses to go first again and once again leads with his Shivan Oasis, then a Fertile Ground. Noah makes a Llanowar Knight and can only watch in despair as his opponent Harrows on turn three, casts a Llanowar Cavalry, and then drops the Dragon on turn 4! Luckily for him he has drawn his Thornscape Apprentice and hence does not take an early savaging.

A dubious moment occurs when Noah tries to cast Shackles on the Dragon that he has tapped and it seems to have resolved. Erno then kinda re-looks at the split card in his hand (Spite/Malice) and realises that he has a Fertile Ground and hence can cast the counterspell. The judge rules that it had not resolved despite the apparent time lapse and thought of what to attack with by Noah, but the decision seemed reasonable given the actual words that were used.

Unfortunately for Ekebom though he starts drawing land like a madman and Noah plucks from the top of his deck.......a WALLOP! The Dragon bit the dust, but the life scores still rested at 20 a piece.

Noah thinks he might be able to break past with his 2/2s now because he can tap the irritating 1/4 Cavalry, but his Apprentice gets Tribal Flames medicine. The only spells Erno casts for the rest of the game are Verduran Emissiary and a Battery token. Meanwhie Noah has wrenched Verdeloth the Ancient off the top (which also produces a 2/2 token) and is savaging him for 4 a turn. A final attack takes Ekebom to -8 or something and Noah wins his first Grand Prix.