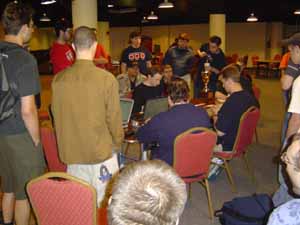 There’s not much more you could ask for from a Grand Prix Top 8 than to see two goliaths such as these slugging it out. Eugene Harvey, former US Champion, Grand Prix – Atlanta Champion, and earlier this year a runner-up at Grand Prix – New Orleans. Maher’s credentials are even more impressive, but both of these guys have been lauded enough for a lifetime. Suffice it to say it’s no fluke they got this far. Harvey is with Slide, and Maher is with Red-White Control. It’s not quite a mirror, but it’s close.

“This is best of three. No cheating, no biting, no kicking under the table.” – Head Judge Rune Horvik

Harvey drew his card for the turn and thought. Eventually he chose to plainscycle a Dragon of his own, getting himself a fourth land. Maher ditched a Renewed Faith, then played his fifth plains and a second Knight. Harvey was the first to find red mana, and waited on his Angel. Maher regrew his Dragon and played a Forgotten Cave. His Angel charged in and then he cycled a Gempalm Incinerator before passing it back. Maher made a Lightning Rift, which caused Harvey to cycle his Starstorm while he could.

Harvey drew and played a second mountain, and thought. He made a second Angel and held his ground. Maher plainscycled his Dragon and poked him for two. He untapped and considered his options. He decided he needed to Vengeance away the board, and played his seventh land. Harvey cycled Gempalm Incinerator and Spark Spray, then played his seventh. Maher regrew his Dragon and passed the turn after playing his eighth land. Harvey tapped seven and summoned an Eternal Dragon. Maher one-upped him with Akroma, Angel of Wrath.

Harvey didn’t like it one bit, and spared himself some pain by chumping with his Dragon. He brought it back the following turn and sat on Wing Shards mana. Maher returned his Dragon and waited. Harvey didn’t like waiting. He tapped a bunch and showed Decree of Annihilation. All Maher could do was gain six before everything was removed from the game.

Maher got the first rip. Neither drew a land off the top, but then they each found two red sources. Of course, Harvey’s first draw had been Eternal Dragon, and he plainscycled it to the “ooooh” of the crowd. Maher meanwhile had no third land, and while he played a Rift and waited for it, Harvey went plains, Temple of the False God. Two turns later he had summoned a Dragon. Maher drew his Eternal Dragon a turn later. 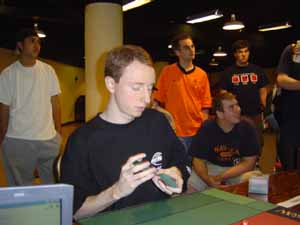 Maher got land number four and shot Harvey with his Rift. Harvey made one of his own while at ten life, and got another two to the face in response. Harvey bashed him to nine. Another hit brought him to four, and Maher gained six life at the end of Harvey’s turn. He untapped with only one white mana in play. He tapped four and cycled Vengeance, docking them both two life points. The plains off the top gave him just enough mana for a Wing Shards. Harvey drew and thought. The life totals were eight to six in Maher’s favor.

He swung. Maher tapped out to Shards away the Dragon. Harvey had no cyclers to punish him. Maher made no move. Harvey played a Slide. Maher consulted and re-consulted the removed from game piles. He cycled a Vengeance and the totals dropped to six and four. He untapped and played Rift. Harvey had no response. He cycled Harvey out of the game.

Both players spent their early turns cycling and playing lands. Maher went through two lands, and Harvey cycled Spark Spray, and then Wipe Clean. Maher looked at him incredulously.

“You cashed in the only one?”

Eugene nodded serenly. “Cashed it in.”

He played an Astral Slide. Maher Plainscycled his Eternal Dragon, and then a Steppe after Harvey burned a Steppe and a Starstorm. Finally a creature came into play: Harvey’s Silver Knight. Maher, with five land in play, tapped out during his upkeep to bring back Eternal Dragon. He played a plains and pitched Decree of Annihilation, since he had an overfull hand. That boded ill for Harvey.

He played a second Silver Knight. Maher tapped seven to put up a big Dragon Wall. Harvey declined to attack. Maher made no play and passed it back to him. Harvey brought out his Exalted Angel. Maher cycled Decree of Justice and made four soldiers. Then he played his eighth land and sent Akroma, Angel of Wrath into the Red Zone. Harvey fell to fourteen. On his endstep, Harvey cycled a Forgotten Cave and made sure the legend would be out of play on his turn. That meant that he could play one of his own and bring the beats. The crowd gasped. Maher fell to twelve. His legend died as soon as it came back into play. 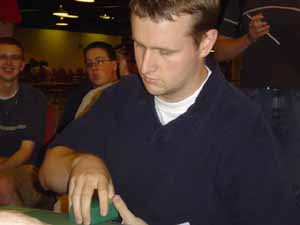 Maher untapped and played Wipe Clean on the Astral Slide. That meant that his Vengeance would catch all of Harvey’s creatures. Maher was suddenly at a huge advantage. Harvey made a Silver Knight and gave it back to him. He had just two cards in hand. Maher regrew his Dragon and was done. Harvey swung into Wing Shards, and then replaced his Knight. Maher dropped Rift and Dragon.

“What could you possibly have? I’m pretty sure I can block here. Alright, I’ll take it, you got me.” – Bob Maher

Harvey noted the change and showed him the Vengeance. Maher got back his Dragon and played a Rift. Harvey busted out the Angel. Maher made his Dragon. Harvey played a Slide and cycled through for a drain for four. Maher failed to shoot him for it. Maher drew and held back. Harvey did the same.

Now Maher struck. He cycled a land at end of turn and after Harvey targeted his Dragon he shot the Angel. Harvey left the Dragon alone. Maher cycled again. This time Harvey targeted his Angel. Maher shot it, but before the Slide could trigger, he cycled again and shot the Angel. Harvey slid out the Dragon. Maher untapped and tapped ten, showing Decree of Annihiliation!

The crowd was stunned, as was Harvey. He looked at his cards, then extended the hand.