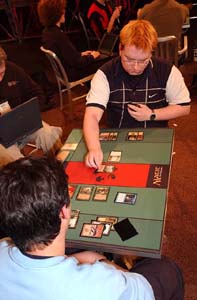 This is it, folks.

Hundreds of games of Magic were played this weekend, but after three days of cuts and elimination matches, only two players are still in the running for the Championship: Sweden's Jens Thoren, and France's Farid Meraghni.

After all the usual fanfare, lights, music, and hype, the best three-of-five $10,000 ante match was under way.

Meraghni was playing a red/green deck with splashing blue for Cephalid Looter. His bombs include Savage Firecat, Nantuko Mentor, and Kamahl, Pit Fighter.

Meraghni had no mulligans, but Thoren had to mulligan twice, and his five-card hand contained a lone Plains and cards of all three of his colors, including Last Rites. Luckily, he drew Timberland Ruins on turn one, which allowed a turn-two Wild Mongrel.

Meraghni played an Ember Beast and a Springing Tiger consecutively, and Thoren managed to draw into five lands, but had just a Cartographer to add to the table.

Things turned ugly quick when Meraghni played out one of his bombs, Savage Firecat, and then attacked with the team the following turn. Thoren swallowed hard, but then solved the largest problem with a Gallantry on Wild Mongrel - making it 6/6 - followed by discarding two cards. The Frenchman just shrugged and summoned forth Springing Tiger and Nantuko Mentor. All that fat was far too much for Thoren to overcome - he had to pitch all his cards to the Mongrel just to trade with the Tiger, and then devoid of resources, he fell the following turn.

Thoren sided out his Last Rites and Ray of Distortion (both of which were in his game-one opening hand and ended up as Mongrel food) for two Leaf Dancers. 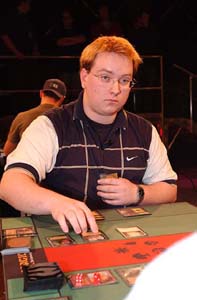 Meraghni had the turn one play of Diligent Farmhand - which he activated at the end of turn 2 - and Thoren played Soulcatcher and Leaf Dancer on turns two and three. The Frenchman then summoned Springing Tiger, which the Swede matched with Mystic Zealot. Thoren's forestwalker and little flyer kept chipping away at Meraghni's life total, bringing him to 13.

There was a flurry of spells near the end of the game, including Reckless Charge and Elephant Ambush for Meraghni, and Beast Attack for Thoren, but in the end, all that mattered were the unblockable Soulcatcher and Leaf Dancer that the dusky young Frenchman had no answers for.

Meraghni felt Ol' Mulligan's vicious bite at the beginning of Game 2, but Thoren was happy to roll the dice with another one-Plains hand. Meraghni came out quick with turn-2 Mongrel, turn-3 Diligent Farmhand (that he used immediately). Thoren may have been in deep trouble had his first two draws not been Forest, Forest, allowing him to play Angelic Wall and Leaf Dancer.

Meraghni's technological side shone through when he used the surprise Island fetched by his Farmhand to bring out Cephalid Looter, and Thoren was all frowns. The Swede's mood darkened more when Savage Firecat came to play on the next turn.

Thoren sucked up the Cat's damage like a man, and then busted out Beast Attack at the end of turn. He then played a Rabid Elephant, and the two of them gangblocked the Firecat, which ended the Beast token's existence.

It's always a tense moment when Savage Firecat dies, because that means its controller is free to cast spells again, and this time was no exception. Thoren could only watch in silence as Meraghni Firebolted the Elephant, finishing it off, and the flashed the spell back on the Leaf Dancer.

A few turns later, Meraghni's Looter and a Reckless Charge allowed him to hit threshold, and he attacked with an 8/5 Springing Tiger and a 4/4 Werebear. Thoren lost his Wall and a Gorilla Titan in exchange and had to start rebuilding from scratch.

Thoren managed to cough up a few 2/2's like Patrol Hound, Cartographer, and another Leaf Dancer, but a stunning Deluge (sided in) from Meraghni ended that nonsense in no time.

With the possibility of a French player winning a Pro Tour for the first time looming, the big-name French players - Raphael Levy, Antoine Ruel, etc. - started gathering around the edge of the match area in anticipation. 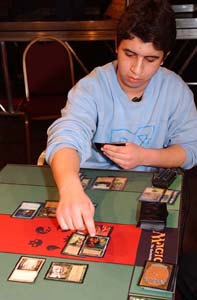 The first creature in game 4 was Thoren's dangerous Leaf Dancer, followed by a Meraghni Krosan Avenger and a Thoren Cartographer that traded. Then the heavy-hitters started coming down: Springing Tiger, Nantuko Mentor, Spellbane Centaur, and Nantuko Disciple on the French team, and Nomad Decoy, Stone-Tongue Basilisk, and double Beast Attack on the Swedish side. All those business cards did, however, were stare at each other across the table as the Leaf Dancer danced through Meraghni's leaves.

Meraghni tried an attack, but Thoren's life total was too high for it to make much a difference, and suddenly, it was all coming down to one game...

According to spotter Scott Johns, Meraghni could have won game 4 in his final attack once Thoren took his chances and decided not to block. Meraghni had Rites of Initiation, and if he Rites away his whole hand and used his Mentor and Disciple correctly, he would have dealt exactly 19.

At least the final game would be on a level playing field, as neither player needed to mulligan.

Meraghni had Werebear and Ember Beast out right away, and when they attacked, Thoren called his bluff and blocked the 1/1 Bear with his Nomad Decoy. Meraghni was not bluffing, and Muscle Burst offed the tapper. Thoren busted out a Leaf Dancer and hoped to ride that to victory again, but he sank in his chair when Meraghni tapped six mana and brought out "the boss," Kamahl, Pit Fighter. Someone in the crowd cheered, and then the Leaf Dancer was torched by the Barbarian Legend's power.

Thoren managed to keep a Thaumatog and a Patrol Hound alive with Embolden tricks long enough to attempt an attack with Overrun. But Meraghni had all the answers, first casting Elephant Ambush to block with, then using Moment's Peace to fog once Thoren sacrificed a bunch of lands. It was an absolutely savage, savage beating.

With Kamahl still in play wreaking havoc, and a bunch of fatties backing him up, Thoren had no chance. Farid Meraghni wins Pro Tour - San Diego, and there will be rioting in the streets of Paris.