These two competitors may be among the youngest faces on the PT, but they have both been around for a long time. Ben Rubin and Jay Elarar met in the Junior Pro Tour way back at New York in 1996. Ben Rubin has made Pro Tour Top 8s in the past, his first at LA in 1998 where he lost to David Price. Ben was once known for a lot of second-place finishes in events, but he won the first Masters event, and is playing here for his second title. Elarar qualified for the Masters on rating, but didn't seem nervous at his first time on stage.

Jay started out with a second turn Blurred Mongoose, and Rubin made a Star Compass. A second Mongoose followed by Elarar, and then a Skizzik without kicker on his fourth turn. Ben didn't have a Counterspell for it, and the creatures knocked him down to nine. Rubin could have done with Reviving Vapors here to search for an answer and gain some life back, but all he had was Fact or Fiction.

He had Fact or Fiction instead which allowed him to search deeper but not to gain life, and it didn't reveal anything that helpful. There was Fact or Fiction, and Swamp, or two Allied Strategies and Global Ruin. Ben took the Fact or Fiction, but needed to do something to stop the Mongoose on his own turn.

Elarar played another Skizzik on his fifth turn, but after a long think, Ben Harrowed and then Absorbed it. This was the only way he could stay alive but he still took his time, perhaps to gain some psychological advantage. The two Blurred Mongoose hit Ben down to eight, and then Rubin played a Collective Restraint to force Jay to pay four mana to attack.

Jay wanted to attack, but didn't know how Collective Restraint worked, and added the mana to his pool in his main phase by mistake. This meant that all he could do was Urza's Rage Ben, and summon a Thornscape Familiar. Ben cast Reviving Vapors, and turned the cards over slowly, land, land... Spite/Malice, and Rubin's life total went back to 13.

Another Fact or Fiction gave Ben Questing Phelddagrif and a second Collective Restraint. Ben played the Phelddagrif and Jay was in a totally hopeless position. The only way for Jay to win would have been an Urza's Rage with kicker, but Ben made the Hippo fly, and attacked for eleven. Jay conceded on his next turn. 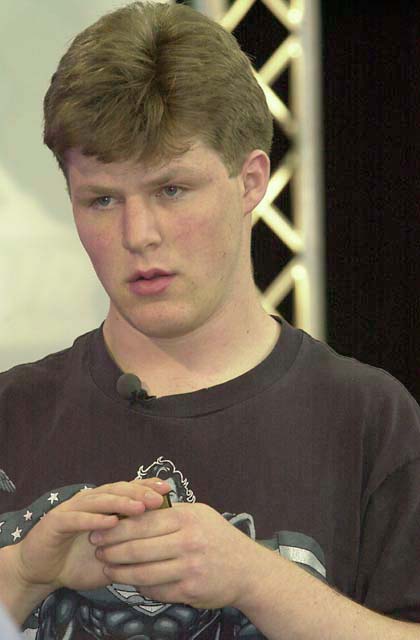 Rubin played a Phelddagrif, and Jay swung with both of his creatures. At the cost of Raging Kavu, he put Ben on eight. He was reduced to only one Forest in play by Global Ruin, and didn't draw a red source to allow him to cast Ghitu Fire.

Rubin drew Collective Restraint, which allowed him to begin the beat down with Questing Phelddagrif. With only one Forest in play, Jay couldn't mount any sort of defense, and the Hippo ended the game after five attacks.