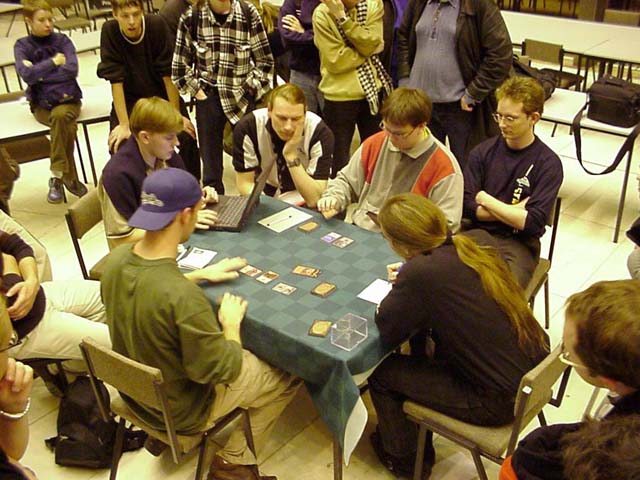 Ryan was off to his typical rapid start with a second turn Shivan Zombie. It wasn't very powerful, though, as Jens was ready with an immediate Mourning. Ryan Maniacal Raged it up and attacked anyway.

Thoren's Dralnu's Pet wasn't large enough to block and survive, and in any case Fuller gave it a Mourning of it's own. The Swede's next play was Ardent Soldier, but this couldn't block Shivan Zombie either, because of the protection from White.

With Jens down to fourteen life, Ryan decided he had had enough of the Mourning, gating the Zombie with a Lava Zombie while Jens was tapped out. This gave Thoren a turn to cast Probe with kicker - Fuller wasn't too concerned as he had two Swamps in hand which he could throw away.

The Lava Zombie attacked to put Thoren on ten before it was bounced with an Urborg Emissary. Perhaps Ryan was beginning to regret discarding those two Swamps - he was still stuck on three land.

Since Fuller was ahead on life it made sense to cast his Plague Spitter, which was also capable of killing Urborg Emissary. Thus he didn't block it when Jens attacked, and took his first damage of the match to go down to seventeen. Thoren had yet another Probe with kicker and forced Ryan to discard Lava Zombie and Ravenous Rats.

Even so he was low on life, and he even decided to chump-block the Shivan Zombie with his Dralnu's Pet. Next turn Thoren summoned a Benalish Heralds and a Galina's Knight, and his Ardent Soldier reduced Ryan to fourteen.

At the end of Jens' turn Fuller debated casting either Spite/Malice or Magma Burst on one of his creatures, finally electing to kill off Galina's Knight with the black spell. Even though he had only four lands, casting Magma Burst on the Herald and Ardent Soldier and attacking for four was definitely still the right play, as otherwise Jens might start to gain control.

Thoren was on four life, but he was not yet finished - he Repulsed the Plague Spitter, cast Mourning and Shivan Zombie and played a Metathran Zombie of his own. Ryan simply played the Plague Spitter again after top-decking another land, and as Thoren couldn't find anything to do about it in his next turn, he had to scoop.

Jens thought about his sideboard choices for a while, maybe bringing in Sleeping Potion, but this didn't seem like the right thing to do, especially as Fuller had cast a Mourning in the first game. He did, however sideboard in a Hobble and a Strength of Unity. Fuller had faith in his main deck and changed nothing.

Fuller started this game with only a six card hand after mulliganing initially. His only creature was a Lava Zombie, but he drew a couple more quickly. In fact Caldera Kavu and Crypt Angel could be described as good top-decks. 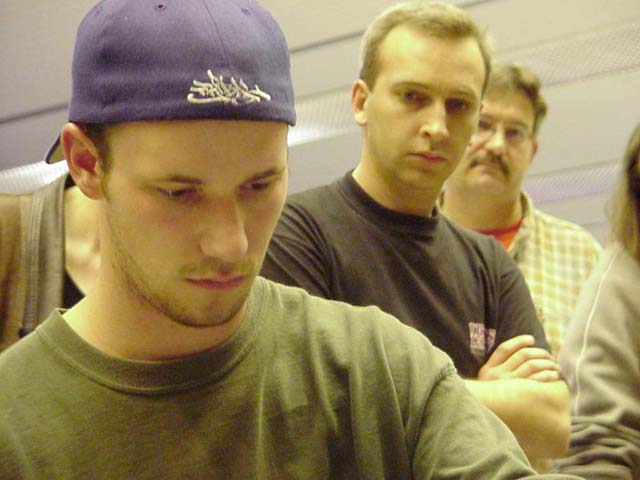 Jens had a Disciple of Kangee and a Benalish Heralds, although the Heralds were killed right away by Spite/Malice. The players traded hits with their 2/2 creatures, but despite the card disadvantage he incurred from the Mulligan, Ryan was in good shape.

He gated a Shivan Zombie for a Lava Zombie, even though the Shivan had protection from both creatures Jens had in play. Thoren had a pretty good trick of his own, slowing Ryan up almost two full turns by casting Hunting Drake and returning Lava Zombie to the top of the Canadian's library.

Ryan still didn't feel then need for his Crypt Angel, instead replaying the Lava Zombie, this time gating his Caldera Kavu, and a Shivan Zombie. These ground-blockers didn't do him much good - Thoren used the Disciple of Kangee's ability to make an Ardent Soldier fly - attacked with it and the Hunting Drake - and played Vodalian Zombie and Galina's Knight.

Fuller was on eight at this point and feeling the pressure, yet still he didn't summon the Angel. Instead he cast Mourning on the Hunting Drake, and recast Caldera Kavu. Now he went down to four as a flying Ardent Soldier and a Galina's Knight hit him again.

Ryan was much happier with his draw this game - it was about as far from a mulligan as it is possible to get. His second turn Ravenous Rats made Jens discard a Swamp, and he traded the Rats for a Vodalian Zombie via a Zap.

Even with one of each color of mana in play Jens had nothing on his third turn, Ryan cast a Caldera Kavu and then Jens played Benalish Heralds. Fuller didn't have a way of dealing with this in his hand, so he simply attacked and summoned a Hooded Kavu.

Without anything to cast Thoren did nothing and waited for the end of Fuller's turn when he could draw a card. The Canadian's cards in hand were Urborg Emissary - no good as it couldn't get past the Heralds, Lava Zombie, and Magma Burst.

Ryan preferred to summon Lava Zombie rather than pump his Caldera Kavu, but neither of his creatures seemed very sizable compared to the Swede's Vodalian Serpent with kicker.

Lava Zombie and the Vodalian Serpent were traded, this lull in the action seemed to favor the Swede who could draw two cards a turn, but he had to find something big enough to deal with Caldera Kavu. A Crosis' Attendant wasn't enough by itself, and this left Jens without enough mana to activate the Heralds so he attacked with them instead. 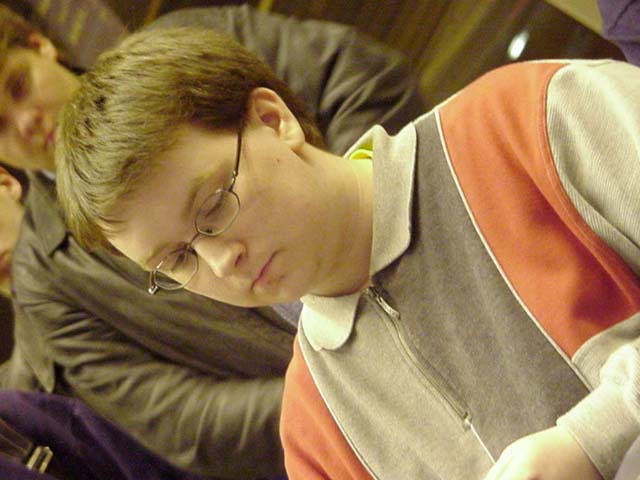 Ryan attacked with the Kavu but only for two as he wanted to play Urborg Emissary and Hooded Kavu instead of pumping. Thoren played an Ardent Soldier with Kicker, but this seemed to give Ryan's Magma Burst two good targets if he wanted to kill them. He stopped a second to think through his options while Antoine Ruel fetched him something to drink, and the Fanta put him in an aggressive mood, as he swung in with Urborg Emissary and Caldera Kavu. He wanted Jens to block the Emissary with his Heralds, as Ryan had a Zap and he was more than happy to trade those cards.

Despite the card advantage the Swede was gaining, Ryan still had a chance as Jens' hand of two land, Strength of Unity, and Recoil wasn't amazing. Thoren cast the Strength of Unity on Ardent Soldier, but it could block neither Shivan Zombie nor Hooded Kavu, and he went down to five lives.

His extra card in Ryan's end step only gave him Disciple of Kangee, and his draw phase Probe missed both Fuller's Zap and Magma Burst since he had been careful to also keep two lands in his hand. Ryan was glad to see the Probe there, as it meant Thoren had less mana to play an answer for the Shivan Zombie and Hooded Kavu.

Even an Urborg Emissary returning the Shivan Zombie wasn't enough, as Ryan Zapped it, attacked with his Hooded Kavu, and then Magma Bursted for the win.