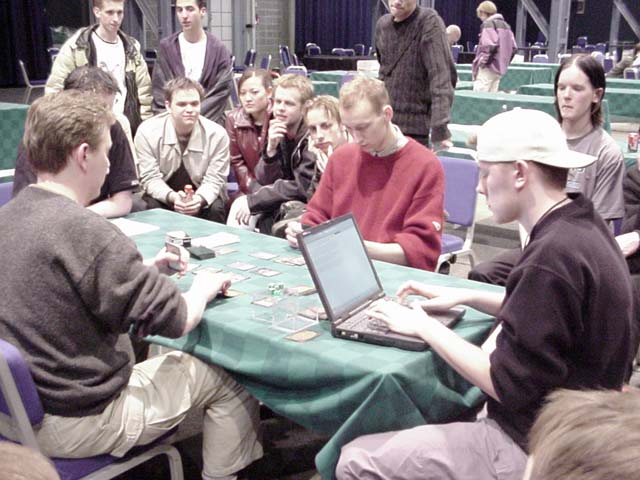 After the marathon semifinal, both players were probably hoping for a quick final. But there was a delay before a card was played in anger - as Jos spotted that one of Jesper's cards was particularly marked. This made sense because it was the Sawtooth Loon, which had seen a lot of play in his first two matches so far this top eight.

A proxy was quickly found, and the game was underway with Jos playing first. Both players kept their opening hands and had something in play on their third turn. Jos summoned a Tower Drake and Jesper summoned a Riptide Crab.

Schreurs continued his attempt to gain the aerial ascendancy on his turn four as he cast a Phyrexian Slayer. Thrane could have played a Glimmering Angel and tried to trade with the Tower Drake, but his life total wasn't sufficiently low to worry him at this point and he went for the Benalish Heralds instead.

The flyers came over for another four points of damage and Jos used Breath of Darigaaz with kicker to remove both the Riptide Crab and the Benalish Heralds. The fact that it also put Jesper down to ten didn't seem entirely irrelevant by this point either.

The Dane did cast the Glimmering Angel on his fifth turn - leaving a blue mana open to protect it from and potential removal, but the Phyrexian Slayer got through as the Angel blocked the Drake and Jesper went down to eight life. Jos also played a Faerie Squadron with kicker.

Jesper had both Tower Drake and Shackles in his hand, and correctly decided to play the Drake, since this could kill the Phyrexian Slayer and then he could Shackles the Squadron. Unfortunately for him, after Jos had attacked with his Faerie Squadron to put Thrane on five, he also summoned a Duskwalker.

Now the Dane enchanted the Faeries with Shackles, and took an attack from Duskwalker to bring him down to two life. As he didn't draw anything capable of stopping the Duskwalker, Jesper had to scoop.

"That was a pretty good draw - flyers and Earthquake," admitted Jos, and Jesper grudgingly concurred.

Jaap wasn't happy with Jesper's method of shuffling, and shuffled his deck for him. The Dane started off, but his hand wasn't that quick. He couldn't do anything until his fourth turn when he played a Sawtooth Loon. This still didn't give him anything that would stick around, since his only other creature in hand was a Cavern Harpy.

Jesper made a slip and showed the cards he was putting on the bottom, which Jos pointed out, saying that he didn't mind seeing them. Schreurs killed the Sawtooth Loon with a Crosis' Charm, and on his following turn played his first creature of the game - but it was only a Stormscape Familiar. 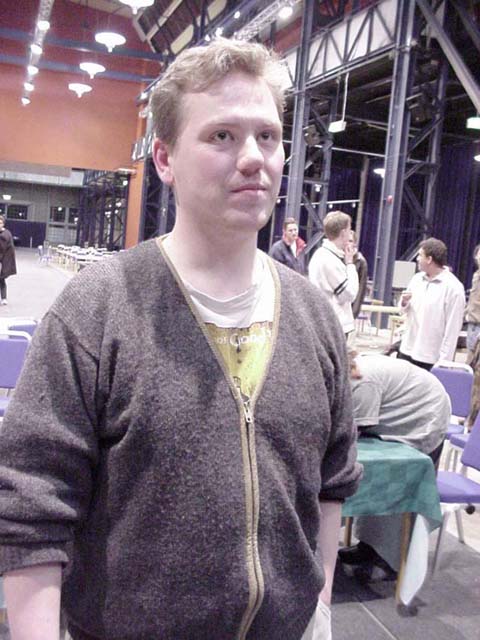 Thrane's peeling skills were pretty good, though, as he drew a Glimmering Angel to go with the Armadillo Cloak that he had found with the Loon. Jos cast a Duskwalker and took a mana-burn as he had forgotten about the Stormscape Familiar's ability. Jesper wasn't particularly bothered as he put the Armadillo Cloak on his Angel. "That is officially a combo," said the Dutchman as he took four damage.

Jos played a Hunting Drake, and then a Mire Kavu, and although he got some damage through - he couldn't deal with the Glimmering Angel/Armadillo Cloak combo - which looked like it would be all he needed to win the duel.

He added a Benalish Trapper, which sped the game up by a turn since he could use it to stop Hunting Drake from delaying the inevitable by keeping it tapped down.

Jaap was bored with shuffling Jesper's deck for him, so I gave it a quick riffles and pile shuffles. Jaap was happy enough with that and they started on the game.

Jesper's second turn Dream Thrush going second was the first creature played, and he added a third turn Lashknife Barrier while Jos had no game until turn four. At this point he cast a Mire Kavu. A Tower Drake was all that Jesper could cast, and it wasn't large enough to block the Mire Kavu, so he let it through and went down to sixteen life.

Thrane attacked back in the air to put Jos on fifteen life, and then strangely decided to cast Sky Weaver rather than either Atalya, Samite Master or Cavern Harpy. Also if he had held back with his flyers he would have been able to double-block the Mire Kavu, and pump his Tower Drake's toughness. Because of the Lashknife Barrier this would have meant that at least one of his creatures could survive.

Instead he went down to nine lives, and Jos added a Phyrexian Slayer to his horde. Jesper merely played Shackles on the Duskwalker in his turn, and again did not want to cast the Cavern Harpy.

Schreurs used Crosis' Charm to destroy the Tower Drake, but when he attacked with Mire Kavu and Duskwalker, Jesper had a nasty surprise for him. He double-blocked the Mire Kavu, and after Jos had assigned two damage to each of the Dream Thrush and Sky Weaver, he cast Pollen Remedy such that they both survived and he took one less from the Phyrexian Slayer.

Schreurs had to sacrifice his Sulfur Vent in order to get the mana to Exclude it, and this allowed him to play a Faerie Squadron as well. Jesper was on eight life, and Jos was on eleven. Jesper cast a Riptide Crab and recast the Dream Thrush. It seemed like the Faerie Squadron was stopped from attacking by the Cavern Harpy, so Schreurs tried a few more random flyers - Stormscape Familiar and Tower Drake.

"Well, if I can't burn your guys, I'll just have to Terminate them," was Jos's conclusion as Jesper played his second Lashknife Barrier, although no Terminates were in evidence. Thrane finally summoned something large enough to break the deadlock - his Sea Snidd was unkillable because of the two Lashknife Barriers.

Jesper did indeed attack with the Snidd, which was allowed through, and it was obvious that Jos must have something metaphorically up his sleeve when he cast Terminate on the Cavern Harpy. 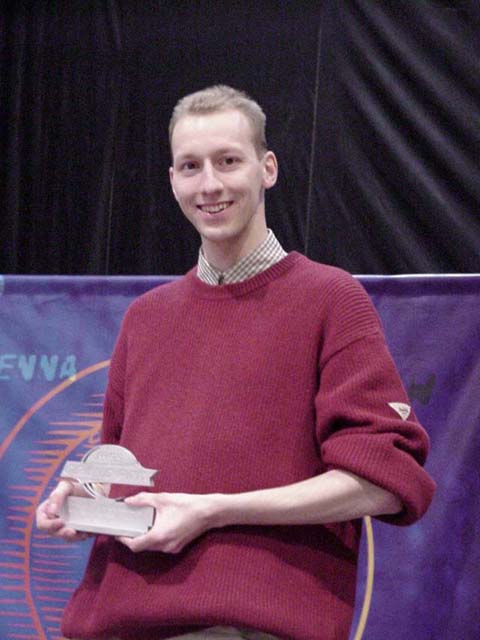 He untapped, cast Breath of Darigaaz, and attacked with his four flyers for exactly enough damage, even though Jesper gave his Riptide Crab flying with the Sky Weaver before the Breath resolved.

A cheer went up from the large Dutch supporting crowd, and even the impartial head judge could not suppress a smile for his countryman who had just won his first major title.