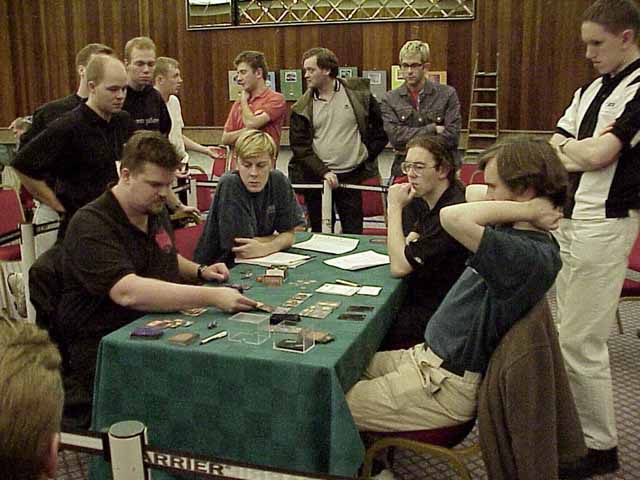 The Grand Prix has finally been reduced to just two competitors. Fifteen gruelling rounds lie behind these players, and only this match remains between one of them and their first Grand Prix title. Darwin has made top eights on a few occasions before, but hasn't managed to win one yet. This is England's John Ormerod's first Grand Prix top eight, although he does have a Pro Tour top eight to his credit.

Both players drafted very well, with John playing a mainly blue/black deck, with just a splash of White for Glimmering Angel, Dromar the Banisher, and to activate a Stormscape Apprentice. Darwin had a Blue/Red/Black deck with lots of very powerful cards - including Cinder Seer, and Pyre Zombie. He also had a Wash Out which he used to good effect throughout the top eight.

John started off in the first game, and he got a good aggressive opening, by playing a Hate Weaver, and Recoiling one of Darwin's first two lands. Darwin couldn't do anything until his forth turn, laying a Slimy Kavu. John added a Faerie Squadron and a Stormscape Apprentice to his board, and it started to look quite promising for him. By now Darwin had almost recovered from the Recoil, though, and Repulsed the Faeries, and cast a Nightscape Master. The Master was amazing in this position, with the ability to deal two damage to a creature, or return a creature to it's owners hand.

John still had a chance though, with his Faerie Squadron and Urborg Drake. Darwin was reasonably low on life, so the Master by itself was not sufficient. Darwin's Repulse is not a permanent answer, despite causing John's Sleeper's Robe to fizzle. On Darwin's turn ten, he did manage to find a solution to the flyers, casting a Soul Burn on the Faerie Squadron, allowing the Master to control the board. John doesn't have a creature with more than two toughness, which would allow it to survive the Nightscape Master, and Darwin soon ends the game by attacking repeatedly with a Cinder Shade.

The second game starts off at a leisurely pace, with John's Vodalian Zombie getting Lightning Darted. John recovers the Zombie though, and replays it as soon as possible. Darwin played a Cinder Shade, but he has nothing else in his hand. John soon found a real threat, playing a Vodalian Serpent with kicker on each of turns six and seven.

Darwin has powerful cards in play, a Cinder Shade, and a Pyre Zombie, but he doesn't have enough mana to use them to there full potential. Darwin is soon forced to chump block with his Zombie, and he conceded when John cast Probe with kicker, not wanting to reveal more cards that he was playing in a game that he was already certain to lose.

It's Darwin who got the faster start in the third game, playing a Shivan Zombie and a pair of Kavu Aggressors. Luckily for John, he drew a Shoreline Raider which could hold the Kavu at bay, because of it's protection from those creature types. Darwin also managed to get some early flyers into the game, by playing a Sapphire Leech. This Leech brought John down to ten life, while he struggled to find any answer to the flyer. He Recoiled the Leech once, and cast Cursed Flesh on it. John played an Urborg Drake, which was only good for one turn's worth of blocking. His Phrexian Slayer got Soul Burned, and Darwin continued to attack with the Leech, and his own Phyrexian Slayer. The Urborg Drake was forced to attack, and John had to watch as the flyer's dropped him down to one life. Darwin had a humiliating way of ending the game, Zapping John.

John needed to win both of the last two games now, with Darwin only needing to take one of the last two to take the title. John started off in the third game, but his hand wasn't very good. He kept a hand with three land, but none of them were Islands, and was forced to discard on his third turn. Darwin was having similar problems, only managing to summon a Shivan Zombie before starting to discard. Both players drew more land without having to discard further cards. John tried to cast a Glimmering Angel, but Darwin dealt with it by a Lightning Dart, before John could play an Island and protect it.

Darwin tried to finish the game quickly, taking advantage of John's mana stall by Repulsing a Dromar's Attendant, playing a Hooded Kavu, and bringing Ormerod down to ten life. John always seemed to be just short of getting stability, as Darwin has a Phyrexian Battleflies and a Sapphire Leech.

John had a Faerie Squadron, that Kastle could kill with his Cinder Shade, however he preferred initially to Recover his Faerie Squadron. Darwin would have won the game quickly if he had more mana in play, as he had Wash Out, and Pyre Zombie in his hand. The Wash Out did not live up to it's full potential in this game, returning only two of John's creatures, and Darwin's own Sapphire Leech.

John seemed to get very sub-par draws in a couple of these games, not playing his Dragon in any of them. Darwin's deck was aggressive enough to get John under early pressure, but it also had quality late game cards such as Pyre Zombie to finish.

Darwin becomes the Grand Prix Manchester winner, and takes home $2,400. John shouldn't be too disappointed with his second place, as the final was the only match that he lost all weekend, and he won $1,700