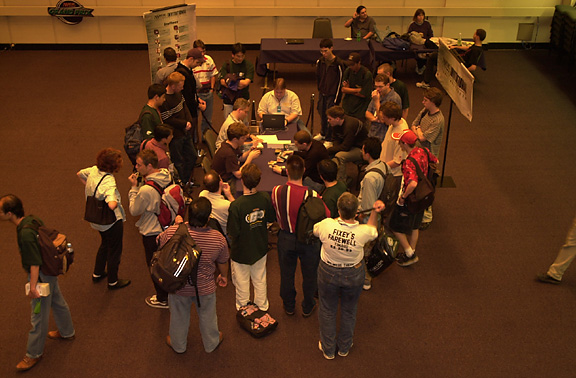 Only three men in the history of the Pro Tour have ever made it to the Top 4 of four different Pro Tours. Two of them sat down Sunday afternoon to play for the right to make a Magic card. Jon Finkel is the reigning World Champion and has won just under $200,000 playing Magic over the last four years. "Invitational Champion" is the only major title that Finkel his never won. Ben Rubin doesn't have any premier event titles on his resume, but he has finished second at two Pro Tours and third at two others. This is Rubin's first Invitational but most observers think he should have been invited two years ago at the tender age of 15. (Darwin Kastle is the third player with 4 Top 4's.)

Rubin and Finkel will play a 2 out of 3 match in each of the Invitational's five formats. Best 3 out of 5 formats wins the title. Finkel's card is a 1UWW Wrath of God that allows the caster to untap up to four lands when it resolves. Rubin's is an enchantment for R that allows all players to bid life in order to gain control of creatures.

Finkel won Zak Dolan's 1994 World Championship deck in Friday's Auction of Champions with a bid of 7 cards and 15 life. Rubin won Dave Price's PT-LA 3 winning deck with a bid of 7 cards and 13 life. So this matchup pitted a Type 1 deck versus a block constructed deck, though - to be fair - Dolan's Type 1 deck was pretty random and Price's Tempest-only deck might have been the best Block Constructed deck of all time. Finkel went 3-0 in this format while Rubin went 2-1.

"Good luck, Ben - you're gonna need it," said Jon Finkel as he played an Emerald, sacrificed Black Lotus, and busted out a turn 1 Serra Angel in game 1. Mark Rosewater likes to refer to Dolan's deck as the "Wand of Wonder" - you just never know what's going to come out of it. Rubin fought gamely, playing out first turn Mogg Consript, second turn Mogg Raider and Mogg Fanatic, and third turn Jackal Pup plus Giant Strength. Finkel had Disenchant for the Giant Strength, but he was still forced to risk Serra in combat with a Mogg Raider. Still, the 4/4 Serra was too much for Rubin to deal with, especially since he started the game at only 13 life.

Finkel talked to the audience about his deck between rounds and commented that he thought it was underrated in the auction. Sure it includes Ley Druid and Siren's Call, but it also has explosive potential and "All the janky cards actually work well together." 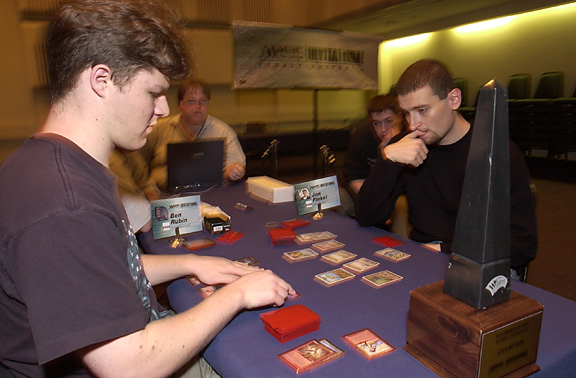 Rubin had his trusty Superman shirt for this match, but it didn't help him much when Finkel played a first turn Library of Alexandria, Mox Pearl and Plowed his Jackal Pup. Rubin's Wasteland did help though. Rubin then played a Cursed Scroll, which Finkel copied with Copy Artifact. Rubin thought for a while and then decided to Shatter Finkel's Mox Pearl, not the Scroll. Obviously he was hoping to mana screw Finkel, but Finkel had plenty of lands plus another Mox. Finkel soon started taking random shots at Rubin's creatures with his copied Cursed Scroll. He used Reverse Damage just to offset one Canyon Wildcat hit so he could dump cards from his hand. Mana Drain was the last card in Finkel's hand and he used it to stop a Scalding Tongs. Finkel was then in position to destroy all Rubin's creatures, but while he was doing that, Rubin would be able to Scroll Finkel and win the race. Finkel then drew Disenchant off the top of his deck and it was bye-bye Scroll. Rubin did draw a Shatter for Finkel's Copy Artifact, but Finkel played out Serra and Cloned it.

Yesterday once they knew they would be playing each other in the finals, Rubin and Finkel agreed to play all three Constructed formats first, then Duplicate Limited, and then finish with Solomon Draft if necessary. Their matchup in Type 1 is the classic battle of beatdown versus control that has been playing itself out for years and years. Finkel has a 5-Color Control deck with Mana Drains, Tutors, The Abyss, etc. while Rubin is playing mostly red cards, including Jackal Pups and Goblin Cadets. Both players went 2-1 in the round robin with their Type 1 decks.

Finkel played a turn 1 Sol Ring and followed it up with a second turn Mind Twist for 4, leaving Rubin with just one card in hand and one Jackal Pup in play. Rubin played out a second turn Cadet and then used Wasteland on Finkel's City of Brass. That City was Finkel's only source of white and both Balance and CoP: Red sat in his hand, but only for a turn until Impulse and a draw phase found a Tundra. Down came main deck CoP: Red and Rubin could do nothing but roll his eyes. Next, Finkel Vampiric Tutored for his Ancestral Recall and seemed to be in control. Things got somewhat interesting when Rubin drew and played Dwarven Miner, but Finkel simply Balanced it away. (Rubin had had two other Miners in his opening draw, but they were both knocked away by that second turn Mind Twist.) One Vampiric Tutor for Yawgmoth's Will later, Finkel was in complete control with Mana Drain in hand and Morphling on the table. Game one goes to Finkel.

Rubin drew his Ancestral in his game 2 opening hand and played it to draw three cards before Finkel could stop him. Next Rubin played out Goblin Cadet and Sol Ring while Finkel Impulsed for Fireball. Finkel used Demonic Tutor, considered getting CoP: Red, but elected to go get his Ancestral. With Library of Alexandria as one of the 5cards in his hand, Finkel's card advantage strategy seemed appropriate. Rubin tried to Mind Twist Finkel for 3, but Finkel had Mana Drain ready. Then he untapped, Ancestralled, mana burned for 4, and played his Library with 6 cards in hand. Rubin Mystical Tutored for Yawgmoth's Will and Finkel couldn't stop him. Rubin recast the Ancestral from his graveyard, drew two Moxes, and recast the Mind Twist - this time for 2 cards. That was enough to prevent Finkel from activating his Library any time soon, so Finkel went ahead and Fireballed the Goblin Cadet and the board was clear for a few turns. Rubin drew into a Jackal Pup and Finkel's life total went into the single digits. Next Rubin drew and played Boil, destroyed a pair of blue dual lands. Finkel was able to Mind Twist Rubin's hand away, but he was down to 5 with no answer in sight to that Jackal Pup. Rubin Demonic Tutored for Gorilla Shaman and ate both Finkel's Moxes, really pinching his mana supply. Finkel cast Timetwister out of desperation, found a Zuran Orb, but all that did was but him one turn and he died with no permanents in play. 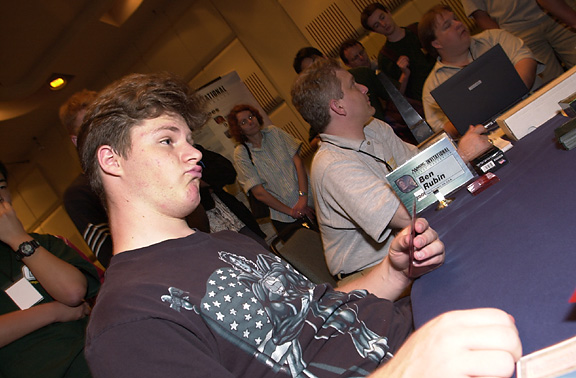 Thus Type 1 came down to a third and deciding game. Rubin had to feel better now that he finally had a game win under his belt. Finkel played first turn land, Mox Pearl and when Rubin tried to Wasteland away his Volcanic Island, Finkel played Teferi's Response! The Response in an Invasion rare that counters and spell or ability targeting a land and allows the player to draw two cards. It's interesting to note that Finkel's Type 1 deck includes two different Invasion cards - he also plays Obliterate. Next, Finkel Mana Drained a Pup and sacrificed his Lotus to Demonic Tutor for Time Walk. He played that and Moat and Timetwister, refreshing both their hands while Finkel's board included Moat, Zuran Orb, three land, and a Mox. All Rubin had was a Volcanic Island. One Wasteland (off the 'Twister) later, Rubin had no permanents. One Ancestral later, Finkel added CoP: Red to his board and Rubin went ahead and conceded (with no permanents in play).

Finkel built another control deck for the Bring Your Own Block format. His Tempest, Visions, Destiny deck is basically a Draw-Go deck. It's mono-blue with lots of permission, Masticores, and Powder Kegs. Rubin chose to run a Tempest, Stronghold, Exodus Counter-Phoenix deck. The Counter-Phoenix versus Draw-Go match has a lot to do with land. Whoever plays less land will be forced to play the first spell and probably lose the ensuing permission war. One crucial difference between their decks, though, is that Finkel runs Stalking Stones. The Stones allow him to create a 3/3 uncounterable creature during Rubin's end step. Thus, it's possible for Finkel to win without ever tapping mana on his own turn. Rubin could have used Stalking Stones, but because he's using two colors (red and blue) he felt he couldn't use them. Rubin does have Wastelands in his sideboard, though, which he brought in. Finkel went 2-1 in this format during the round robin and Rubin went 1-2.

Finkel won the coin flip an elected to draw first. Rubin led with a turn 2 Legacy's Allure. Finkel answered with Powder Keg. Rubin played a turn 3 Hammerhead Shark (which soon got Kegged away) and then went for a turn 4 Tradewind Rider, which Finkel let him have. Both players ran out of lands to play on turn 6. During Finkel's 6th end step, Rubin attempted to Intuition. Finkel played Dismiss, but Rubin had Counterspell ready and three Shard Phoenixes made their way into Rubin's hand and graveyard. The Phoenix can be recursed from graveyard to his hand for just three red mana so Finkel could never get rid of them. Finkel pounded his deck, asking it to deliver up a Masticore that might allow him to deal with the flying Phoenix beats, but he was never able to stabilize. Rubin won game 1. 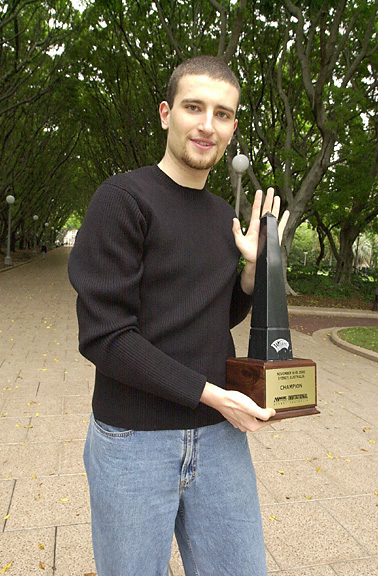 Finkel had the option of sideboarding in Thran Foundries in order to fight Rubin's graveyard recursion, but elected to go for four Grindstones instead. Finkel played a turn 2 Allure and then a turn 5 Grindstone to start game 2. Rubin tried to Mana Leak the Grindstone, which Finkel Dismissed, but Rubin had another Mana Leak ready. It was unclear to the gathered crowd why Finkel didn't just pay the three mana for the first mana Leak (and after the match Finkel himself admitted he just messed that up). Finkel then top-decked a second Grindstone and this time one Dismiss was enough to defend it. Finkel spent the next ten turns countering the same two Shard Phoenixes and Grinding away at Rubin's library. Eventually, he put Masticore into play and that assured that Rubin couldn't deal 20 points of damage before his library was gone.

Finkel led with first turn Grindstone in game 3 and spent the early turns of the game Grinding away at Rubin's library. He did give Rubin a Shard Phoenix to start recursing, but he Dismissed it once and then played a Masticore. That Masticore also help off Rubin's two Hammerhead Sharks. Rubin went for a main phase Whispers of the Muse with buyback, which he defended with Counterspell, but that left him tapped out and Finkel was able to get a second Grindstone into play. Finkel just left his Masticore on defense and used half his mana to Grind Rubin rather and the other half to shoot his creatures. Rubin did get Legacy's Allure into play, but it couldn't build up counters fast enough and Jon Finkel won the 2000 Magic Invitational, three formats to zero.