Sam Lau and Jonathan Chan faced off in the final match - and neither player knew quite how they got there. Lau played one of the popular Trix decks, while Chan piloted one of the few red decks that survived yesterday's Sligh slaughter. Chan played an uncommon deck, which resembled Chris Benafel's Ponza deck from this year's US Nationals. The two players were both Singaporean and both knew each other well.

Jonathan used a special shuffling method designated Sigma-6. That's about all I can say about it. Highly classified stuff.

Game one was a relatively short order. Lau kept a mediocre hand while Chan mulliganed a bad hand into a bad hand, with great red spells, a Wasteland and a Rishadan Port. No Mountains. Lau was also mana shy - he had to Vampiric Tutor for a Swamp. Chan finally drew a Mountain and played a turn three Jackal Pup, then he used his Port to lock down a Swamp. On his next turn, he played a Stone Rain on one of Lau's precious lands. Lau removed a Donate from his hand and Misdirectioned it back onto Jonathan's Wasteland. It was a very funny play - but it also set Sam up for his kill - allowing him to play his Underground Sea. With the Sea in play, he Consulted for an Illusions.

And passed his other two Donates.

Lau remarked that that was the first time he'd lost on a Consult during the entire tournament. He joked that he had handed Jonathan the first game - and Jonathan wasn't complaining at all. The two kept joking while sideboarding - and the crowd got in on the action, too. As they drew up their hands for game two, Sam's hand looked alright, but he chose to Paris it. Chan gave it a Sigma-6 and handed it back over. Lau chose to keep the hand, remarking "I have faith." Chan asked him where his newfound faith came from, since he was so quick to Paris a decent hand last game, to which Lau replied "late conversion." Chan led off with a first turn Pup, and Lau immediately Force of Willed it, commenting "I'd better not Consult now." Without the Pup, Jonathan didn't have an offense - he was resigned to using a Rishadan Port to tap lands for a little while. Nothing happened for a couple turns, then Chan found a second Pup. He attacked twice before Sam played a Masticore. 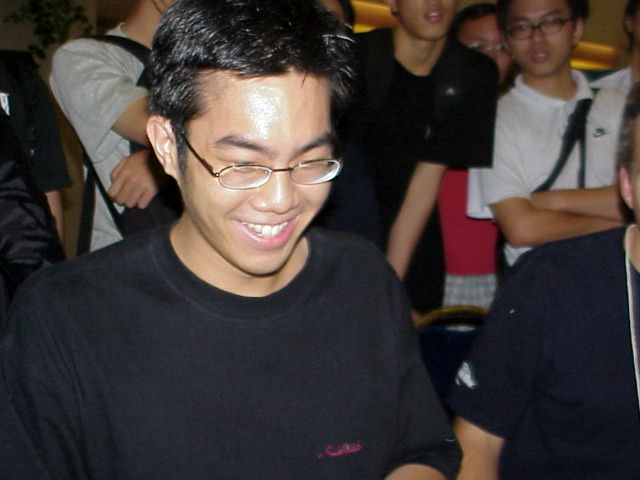 The Masticore drastically changed the game. Though it locked Lau, who only had one card, it shut down Chan's entire offense. He had been holding two Pyroblasts and an Incinerate - hoping to catch Sam off guard, but he was not prepared for the Masticore. He destroyed a few of Sam's lands, but drew land after land, and nothing to combine with the Incinerate to kill the Masticore. Five turns later, to the jibes of "if this Masticore kills you, it'll be the saddest thing I've ever seen," the Masticore had dealt twenty damage, embarrassingly killing the almost prepared Chan.

Both players realized how bad their hands had been when they won their games - and started game three off with "remember, whoever gets the worst hand tends to win." A loudmouthed Nick Wong let us all know that "Jonathan Chan and Sam Lau are going to prove that Magic is all luck." He may have been more right than he knew.

Lau led off with a Duress, nabbing a Pyroblast, then plowed right into the old Mox Diamond, Necropotence play, drawing ten cards. Fixing himself a nice hand - he couldn't have known that it was about to get wrecked by one card:

The Sphere is a random.artifact that occasionally showed up in old school Hatred decks to slow down fast combos. It hasn't seen much play this season, with Hatred dropping out of the limelight. But here it was, on the stack.

And that's as far as it would get. A quick Force of Will took care of it, as Lau observed just how bad it was for his deck. Chan had a Pyroblast, but chose to hold onto it for the coming battle over the combo. 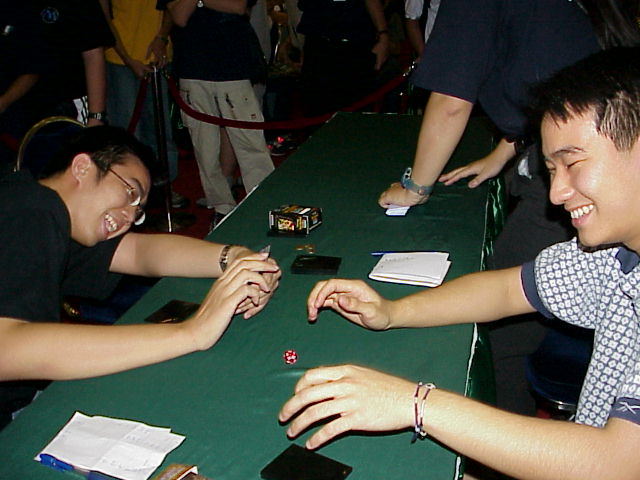 That happened on the next turn. Lau gave Chan a big smile and said "I'm going for it." He played an Underground Sea and dropped his Illusions. Jonathan waited for the lifegain to go on the stack before Pyroblasting it. Sam smiled and Misdirected it onto his Necropotence. He Necroed for twenty, putting a massive array of countermagic into his hand. With the Donate in his hand, too, the game seemed like a lock.

Remember, Lau has two Swamps, a Mox Diamond and an Underground Sea, along with a ton of countermagic. There are only two cards in the universe that would get Chan out of this situation.

And one of them is Rishadan Port. The top card of his deck. He drew it and paused. He played it. He asked the judge several very specific questions about mana interaction with the draw step. He felt that he had everything clear.

He felt, just like Lau, that this game was over.

He waited for Lau to pay the upkeep on Illusions - which he did; he was waiting for the draw step. 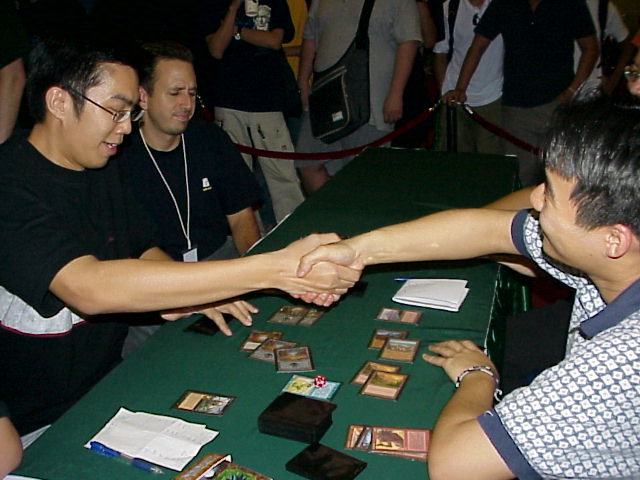 Lau suddenly played a land. Chan asked him to wait a minute because he didn't understand why he played a land during his draw step. Lau motioned at the Necropotence in play, glaring the words "skip your draw step."

It was just that weird.