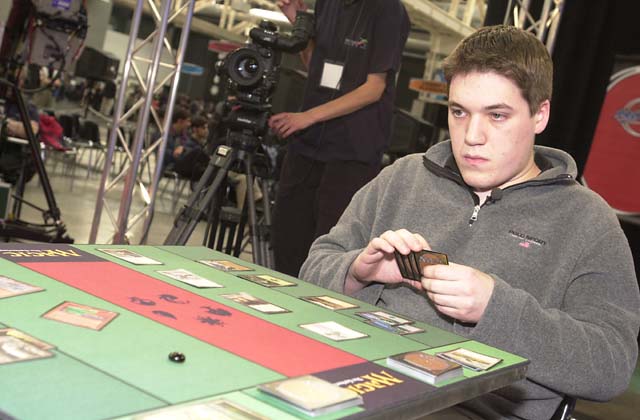 Kai was certainly not confident going into this match up as there were some cards in the American's deck he could just not deal with should they be drawn, the most prominent of which was the Tsabo's Assassin. Should he win this match it would be his ninth consecutive win on the final day of a Pro Tour and he would be the first player ever to win three Pro Tours. A win here would also catapult Kai back into the lead in the Pro Tour Player of the Year race.

Alan is one of the unsung heroes of Magic, having never actually won a Pro Tour, but having reached the Top 8 on numerous occasions. This eccentric gamer is well known for his exciting deck choices such as 75 card Intuition decks, Godzilla, Tinker in Chicago 99 and Fluctuator in N.Y. 99.

Kai won the toss and elected to play first making a first turn Stormscape Apprentice followed by a second turn Samite Pilgrim. Comer managed to reply with a Slingshot Goblin asking if Kai had the Exclude - he didn't. Budde's third creature to hit the board was a Razorfoot Griffin, but that Slingshot Goblin was nasty business for the German. Alan had a pretty weak start with only the Goblin played from his hand after 4 turns. Boom! Kai then made a Voice of All to back up his Griffin naming protection from black. Comer then made a Mire Kavu but could do nothing about the four he was taking a turn from the flyers.

Realizing he needed to start racing, Comer ran on in with both the Slingshot and the Mire Kavu, but they were blocked very effectively by both a Samite Pilgrim and a Restrain on the Kavu. The race looked like it might suddenly take a swing when Verdeloth the Ancient slammed into play along with a 2/2 token, but the fliers kept coming in and an Attendant was made to back them up. With the life scores at 7-20 to Kai, Alan again went for an Alpha Strike reducing his opponent to 12, then a rather disappointing Quirion Trailblazer was played.

In the German's next turn he attacked with the Attendant as well as both flyers taking out a Quirion Trailblazer, but leaving himself with very few blockers for the American's force. Kai then laid a Treva's Ruins and said go with only a Samite Pilgrim facing down a fair amount of damage, but Kai had all the answers in his hand: a Pollen remedy and an Exclude. The Samite Pilgrim chumped and before it died it prevented damage to the Voice of All to be safe. It turned out that the Remedy was not even needed, but a Yavimaya Barbarian was Excluded for good luck, then the whole German posse rolled on over for the kill.

Alan elected to play first, but Kai had to mulligan down to six before they could start.

The first play of this game was Kai's Stormscape Apprentice, but this time Alan had a turn two play - a Nomadic Elf, which was also too big for a Samite Pilgrim that Kai played on his second turn. A turn three Tower Drake for Kai was looking strong, backed up by a second Samite Pilgrim to defend the floor (Kai had managed to play 3 different land types), but Kai had stalled on 3 land. A crippling blow from Alan came as a Quirion Trailblazer enabled him to Plague Spores the Tower Drake and Kai's island on his 6th turn, and then in the 7th the game was almost finished as it stood when Comer managed to slip his Tsabo's Assassin into play.

Happy to gradually pick off the German's creatures, Alan just bided his time tearing away at the Barriers that faced his Nomadic Elf. At this stage, Kai had only two outs: Draw a Repulse then Exclude the Tsabo's Assassin when it was replayed or find the Obsidian Acolyte. When Nemata Grove Guardian moseyed into play Budde's destruction was complete, despite a Protection from black Voice of All being impervious to the Assassin.

The Grove Guardian started abusing the mana on Alan's board as it could make 3 tokens a turn and the game was won swiftly.

This game was absolutely savage.

Kai once again launched into the game with his Stormscape Apprentice and Samite Pilgrim (for the third time in a row), followed by a Voice of All, but Alan stalled on three land and had to discard once before drawing a fifth turn Thornscape Familiar. There was nothing the American could do though as his sixth turn Nomadic Elf was not enough to stop the creatures that Kai continued to lay each turn. With the life scores at 20 - 9 to Budde, Alan finally drew his fourth land and said go! Alan took the damage, blocked intelligently then cast Simoon which would have left the German with nothing but a Voice of All but Kai had the answer - Pollen Remedy! Preventing the instant from killing any of his horde. Comer swept in seconds.

Once more Kai made the first play (Samite Pilgrim) having made a plains and then a swamp! Kai boarded in a Slay to go with that Swamp. His next few plays were a Benalish Lancer and a Razorfoot Griffin, which were facing down a Thornscape Familiar, but Comer stalled on three land and when his only blocker was Repulsed the damage started coming in as Kai took advantage of the open floor space by attacking with all three creatures. Rallying slightly from the German's tempo, Alan managed to recover by relaying the Familiar, then Zapping the tapped Pilgrim. The Familiar then traded with the Benalish Lancer and the board situation started to look less scary for him. 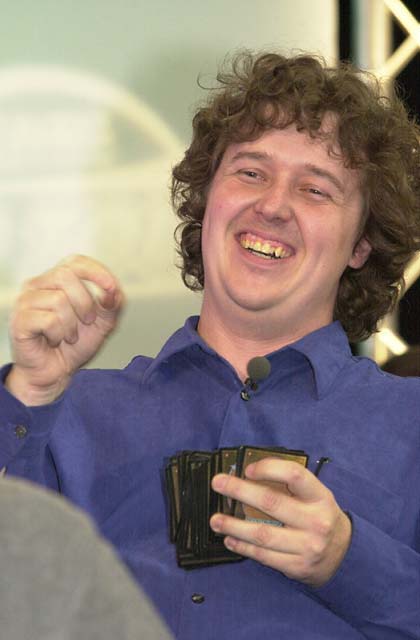 Thinking he could swing the game back in his favor, Comer played his Tsabo's Assassin, but was dismayed by the indifferent "sure" that escaped Kai's lips. "I did not like the sound of that!" Sure enough, Budde had the answer right there in his hand - his Obsidian Acolyte, so the creatures once again swept in and reduced Alan to five. To add insult to injury, the German then played his Voice of All naming 'red'.

"How good would Simoon be here?"
"I hope I draw Simoon"
He draws.
"That's not Simoon!"

With nothing to deal with 4 power worth of fliers or the Stormscape Apprentice that could suck him for one with its black ability, Alan fell to the mighty German Juggernaut.

So Kai Budde becomes the first player ever to win three Pro Tours, reclaims his pole position in the Player of the Year Race and retains his undefeated record on Day 3. What next?