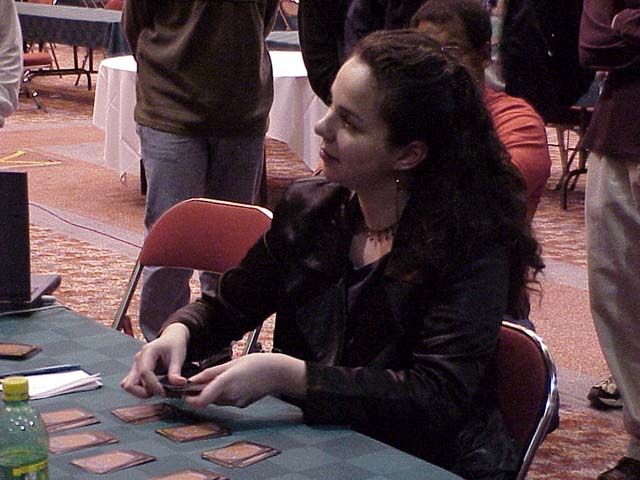 Michelle Bush is a 32 year old medical student at Harvard and has long been regarded as the best female player in the game, but she had never quite managed to put up a high-quality result. She changed the face of Extended by thinking up the Trix deck that dominated the winter 1999 qualifier round and resulted in the banning of Dark Ritual and Mana Vault. Her Top 16 finish at Grand Prix Philadelphia made her the first woman to win money at a Pro Tour level event. In New Orleans she finally added a Grand Prix Top 8 to her resume and in the finals she looked to knock out Bill Stead and claim the title "champion." Interestingly, Bush made it to the finals without the assistance of even a single bye. Meanwhile, Stead was helped out by the three that he won in a Grand Prix trial. 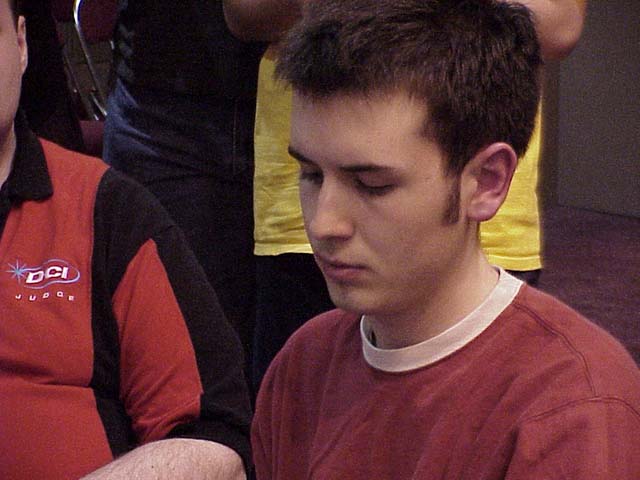 Stead is a 17 year old high school senior from Tampa, Florida who put together an amazingly fast red/black deck during the Top 8 draft. His deck sports a X/Y/Z/W mana curve plus four copies of Maniacal Rage. Bush also drafted black/red. Hers is a bit more controllish, plus she's splashing green for Darigaaz, the Igniter.

Both players started game 1 of the best 2 out of 3 match by playing turn 2 Shivan Zombie. Bush used Tribal Flames to clear a path for her zombie and then played an Ancient Kavu. Stead answered with a pair of Kavu Aggressors and an Ancient Kavu of his own. A timely Stun appeared to allow Bush to stay ahead in the fast and furious damage race. She then played a Ravenous Rats to chump block and force Stead to discard Hooded Kavu (not quite as good against Michelle's red/black splash green deck as they were in the quarters or semis). However, Breath of Darigaaz for 1 cleared the Rat out of the way and Stead swung for 9 damage, dropping Michelle to 1 and himself to 4. Scorching Lava for 1 finished her off before she could crack back for the win. Stead thus took a quick 1-0 lead. 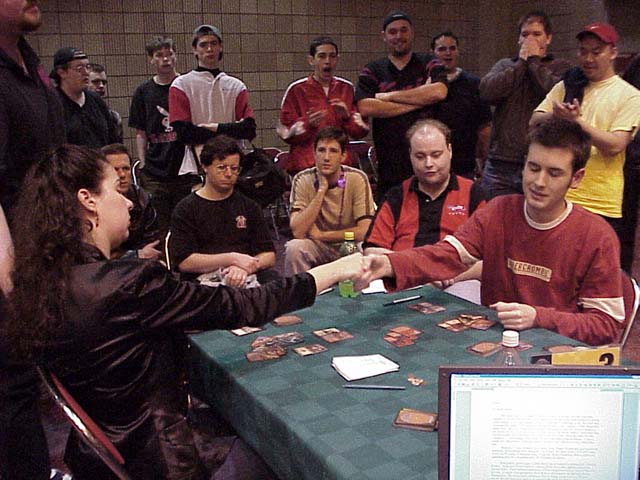 Game 2 was really stupid. Michelle only drew 2 land, and worse still one of them was a Forest. She kept the hand because it included a Cameo, but she was down to 4 before she got to cast any spell other than a Phyrexian Battleflies. Stead poured on the pressure as quickly as he could with an Apprentice, a pair of Hooded Kavus, and an Ancient Kavu.

So Bill Stead burst onto the Pro Tour scene in a championship match that lasted 20 minutes and maybe 12 turns. He upset Michelle Bush 2-0, winning $2,400 for himself along with an invitation to Pro Tour Barcelona and enough Pro Tour points to play in the Masters Gateway tournament once he gets there.