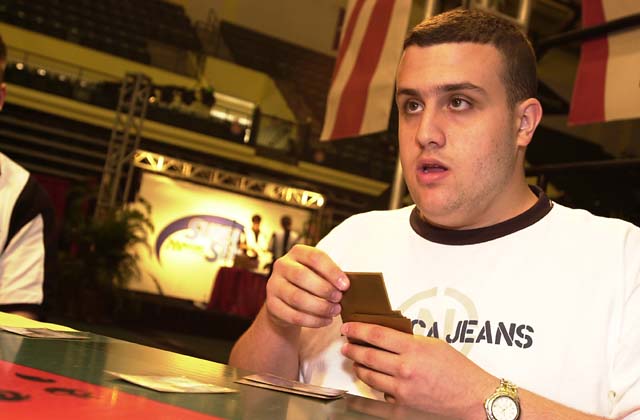 This match would decide the 2001 Junior World Champion. Ralph played a Merfolk Opposition deck, and Ben played Fires. The potential difference maker in this deck would be the Urza's Rages in Ben's deck, which have not been used in most Fires decks lately. In this case, they give him an uncounterable creature kill card. More importantly, Ben had Artifact Mutation in his sideboard, which gave him a way to destroy Static Orb; a key part of Ralph's deck.

Ben played first, and started off strong with a Llanowar Elf. He then attacked with the Elf, and played a Rishadan Port, which tapped down Ralph's land on upkeep. Ben then summoned Blastoderm on the following turn. Ralph played his third Island, and summoned Coral Merfolk. Ben played Flametongue Kavu to shoot down the Merfolk, but it was countered with an alternate casting cost Thwart. Ralph then chump blocked the Blastoderm with his Coral Merfolk, leaving him with no permanents in hand. This was probably a bad play, as Ralph was not at a low life total, and the Merfolk could have been important later, since it can block and kill many creatures in Ben's deck such as Battlemages and Flametongue Kavus.

Ben continued to apply pressure, playing a Shivan Wurm. This was Dazed, and Ralph once again had no cards in play. The Blastoderm attacked, and Ralph replayed an Island. The Port was used to slow down Ralph's mana, and the 'Derm attacked until it faded away. Things got even worse for Ralph when Ben played a second Port, and shut down two of Ralph's lands.

A lonely Llanowar Elf charged into the Red Zone for a few turns, but was soon joined by another. Ralph played Lord of Atlantis. Ben then went for it all, and played Ghitu Fire for the six points of lethal damage, but Ralph Thwarted it. A Flametongue Kavu resolved a turn later, taking out the Lord and clearing the way for Ben's attackers.

Ralph went first this game, and played a second turn Rootwater Thief. It attacked on the following turn, and simply dealt one point of damage. It was now Ben's third turn, and he still had nothing to play. An Opt was played on end step, and Ralph then untapped, attacked, and played a second Rootwater Thief. Ben played his first non-land card of the game in Flametongue Kavu, which was countered with an alternate casting cost Daze. Ben attempted a Blastoderm on the following turn, which was Counterspelled. Static Orb then hit the table, which was devastating for Ben, as he had tapped out on his last turn. 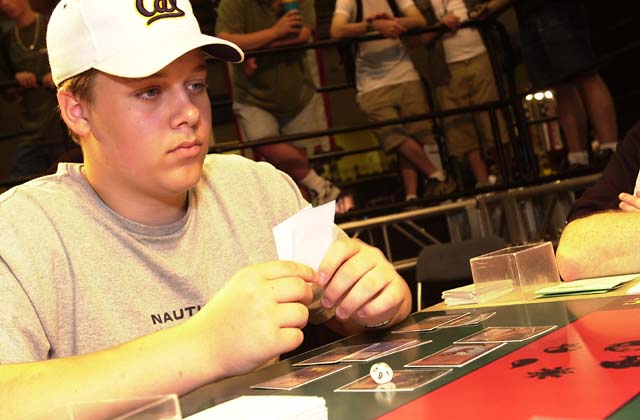 Thunderscape Battlemage was played without kicker, which stopped both Thieves from attacking. Ralph finished up the combo by playing Opposition on the following turn, and Ben responded by playing Urza's Rage on one of Ralph's Thieves. Ben then untapped and played Artifact Mutation on Static Orb. Ralph played a Lord of Atlantis and ended his turn. Flametongue Kavu was summoned next by Ben, and it shot down the Lord, which tapped a Battlemage before it died.

A second Static Orb now hit play, but it wasn't as impressive since Ralph only had one creature out. Rootwater Thief tapped down the Flametongue on Ben's attack step, and the rest of his creatures attacked for five damage. Ben now had all his creatures tapped, and only two lands untapped, making the situation easier for Ralph. Ben soon played Ghitu Fire on Ralph's Rootwater Thief, leaving him with no creatures on the table. Flametongue Kavu started to apply some beatdown, and an Artifact Mutation was Thwarted.

Ralph was still having trouble drawing a creature, and Ben attacked with a Flametongue and Battlemage. On the following draw Ralph still had no creature to play, and conceded.