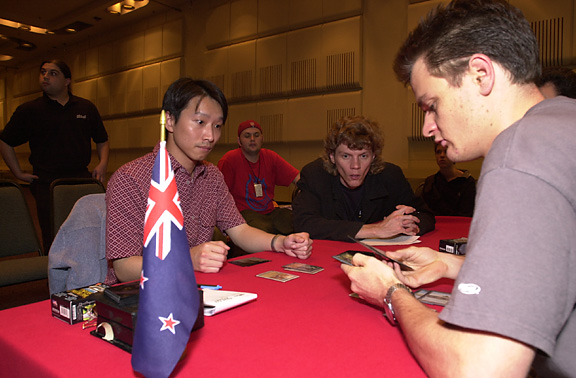 The Grand Prix Sydney finals was a battle of giants as one-time PTQ winner Will Copeman of Australia, who announced "I'm not looking forward to this matchup" faced off against recent PTQ top 8 finisher and budding architect Gordon Lin. Copeman was playing an Australian-Style Tradewind/Survival deck with maindeck Mother of Runes while Lin was about to make big under-1700 flag money with a Pandeburst Replenish deck.

Copeman opened with Land Grant, Counterspell, Mother of Runes, Wall of Roots, two Islands and Forest. With only the Tropical Island he just drew in play, Copeman was unable to deal with Lin's second turn Intuition off an Ancient Tomb for two Bursts and Pandemonium.

Copeman played a turn three Birds of Paradise with two blue mana open for his Counterspell. During Copeman's end step, Lin Frantic Searched to discard the Pandemonium, untapped and cast Intuition that Copeman countered. Lin then cast Mystical Tutor for Replenish, moved to his turn and cast it for the win.

Copeman stopped the match and insisted that Lin had cast the Intuition and Tutor during Lin's turn, not Copemans. After a discussion with the judges, it became clear that Lin had untapped his lands for Frantic Search without explicitly announcing it, and Copeman had assumed he was untapping for the beginning of his turn and casting Intuition and Mystical Tutor during his Upkeep. Had Copeman realized it was still his own end step, he never would have cast the Counterspell and would have had it available to stop the Replenish on Lin's turn. Copeman was extremely upset with himself for having made such a mistake and seemed mentally rattled as he entered the second game. 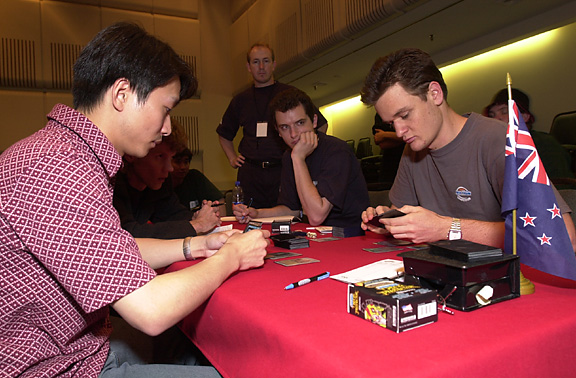 Copeman's second game opening hand of Monk Realist, two Land Grant, Tradewind Rider, Uktabi Orangutan and two lands did not contain enough threats or counterspells to be worth keeping and he chose to mulligan. His second hand was even worse with a Forest, Back to Basics, Survival of the Fittest, Squee, Tradewind Rider and Masticore. He mulliganed again and was slightly better off with a Tropical Island, Forest, Masticore, Tradewind and Counterspell.

Copeman drew and played a second turn Birds of Paradise and was faced with the choice of Back to Basics or holding mana open for Counterspell on his third turn. Knowing that Pandeburst can do little with three mana, he chose to cast Back to Basics and it was Pyroblasted. The following turn he faced a similar decision - cast Tradewind Rider or Masticore or keep two blue open for a Counterspell? Pandeburst decks are much more dangerous with four mana than they are with three but Copeman decided to go for it and cast Masticore. Lin didn't have a counter and instead cast Saproling Burst to both block and attack.

In a surprise move, Copeman attacked with the Masticore into a 6/6 Saproling. His strategy came through as Lin created two more Saprolings and Head Judge Paul Barclay stepped in to kill the Saproling that blocked and now only had a four toughness.

Lin attacked with both tokens for six and attempted a second Saproling Burst that was countered. Copeman attacked for four with the 'Core but on his turn Lin held one of his now 2/2 Saprolings back to block as he attacked for just two. This was a misplay as Copeman shot the 2/2 Saproling blocker at the end of Lin's turn and attacked. Lin created a 1/1 blocker that was also shot down by the artifact and took four damage.

The "good in every format" Masticore proved its worth again as it continued the attack with Copeman discarding his only card each turn. Lin was forced to concede with Pyroblast, Force of Will, Annul and two land in his hand. Throughout the entire game he never drew a search card!

In the deciding game, Copeman's opening hand consisted of two Birds of Paradise, Survival of the Fittest, Masticore, Brainstorm and two land. He didn't have the Survival for long as Lin Duressed it away before Copeman played a land. Lin followed the Duress with a turn two Negator off an Ancient Tomb. Copeman Brainstormed and cast a Bird allowing him to play a turn three Spike Weaver that Lin had no counter for. In a slight misplay, Lin Brainstormed at the end of Copeman's turn instead of in response to the Weaver in hopes of drawing a counterspell.

Lin attacked with the Negator assuming that Copeman would use the Weaver to prevent the damage. Instead the Weaver blocked and Lin was forced to destroy three of his lands. Lin's game was all Negator at this point as if it died he just wouldn't have the permanents to do anything. Copeman Brainstormed at the end of Lin's turn and was able to cast Quirion Ranger and Masticore. Lin had an Annul for the Masticore and with only a land and a Negator in play he Consulted for City of Brass during his upkeep. 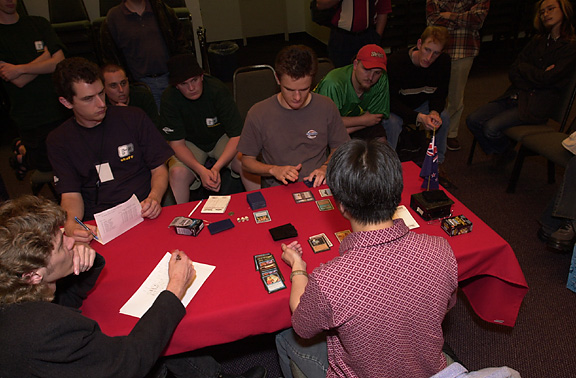 The Negator attacked and trampled over the Quirion Ranger, forcing Lin's other land to be destroyed. Copeman then had a choice of what to play. He was at nine life, and could cast Tradewind Rider or Soldevi Machinist. But Lin just Consulted for a City of Brass which was very suspicious as if there's one land most people don't want it's City of Brass. Obviously Lin wanted to have off-color mana available and having cast no active spells in the early game, it seemed apparent that he was likely holding a Pyroblast. So the correct play was probably to cast the Machinist to suck out the Pyroblast, and play the Tradewind the following turn to absorb more of the trample damage as all Copeman needed was one or two creatures off the top destroy all of Lin's permanents if the Negator attacked.

But Copeman went with the Tradewind play, which if it got through could unsummon the Negator the following turn with the help of the two Birds of Paradise. Lin had the Pyroblast and Copeman took five from Negator. Copeman played the Machinist the next turn and double-blocked the Negator with a Birds of Paradise, leaving him at one, but was unable to draw another answer as he fell under the mighty beast one turn later.